This Sunday’s New York Times Magazine cover story on the upcoming revival “Shuffle Along” has been making the rounds since it was posted online March 24 — with some help from a big homepage banner ad for the show directing people to read the story.

From the desktop ad, people can not only click through to the cover story — a 10,000-word piece by John Jeremiah Sullivan, a contributing writer for the magazine and the “southern editor” of The Paris Review — but buy tickets to the show itself.

It’s an unusual ad treatment, as editors are usually discreet about letting advertisers know what stories they’re working on, when they’re going to be published and in what section, partly because things often change and partly to avoid the appearance of business-side interference in the editorial process. The ad for “Shuffle Along” confirms that the article is the magazine’s cover story.

“Yes, our editors are always discreet in what we share with the subjects of our stories, especially when those subjects are also potential advertisers,” magazine editor Jake Silverstein said in an e-mail. “But naturally there are times when, in the course of us doing our jobs (fact-checking, scheduling photo shoots, etc.), a subject learns when a story is scheduled to run. What they do with that information is not my department, nor does it have any effect on what I publish.” He referred follow up questions to Times PR. 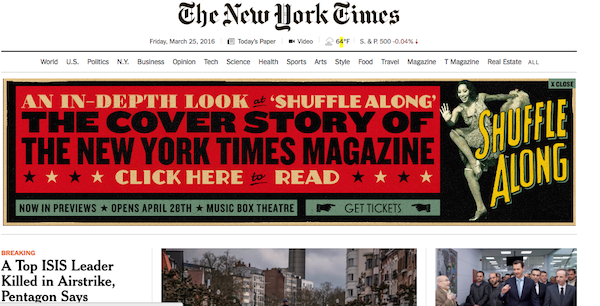 A Times spokeswoman said the ad meets with its guidelines that say Times editorial content can be used in ads as long as the material is “quoted accurately and has not been taken out of context.” The rep said the paper didn’t tell the advertiser in advance when the story would publish. The story was posted at 7 a.m. March 24 and the ad went live 17 hours later, at midnight.

Still, for Kelly McBride, who teaches ethics at The Poynter Institute, the ad raises a lot of questions, such as whether the Times confirmed the story was on the cover of the magazine and if it sold the ad first, then updated it to reflect the story’s publication.

“The biggest question that readers might have is whether the Times did the story in order to sell the ad?” she said. “Knowing the Times, I’m sure they didn’t. But not every reader knows that. We always teach that you have to deal with the perception of a conflict of interest, as well as real conflicts of interest. In this case, I suspect that the ad creates the perception that the Times may have compromised their editorial independence, by doing a story on an advertiser. So, we’ll have to see how they deal with that perception.”

It’s not the first time ads have used editorial in increasingly creative ways at the Times, as digital ad dollars are becoming harder to come by. Last December, an ad for Book of Mormon included a screen shot of an actual Times article (not about the show itself but about arts fundraising).