Facebook’s dominance in digital advertising can foster ambivalence, and even, in some cases, hostility.

“Many publishers view doing business with Facebook as a sort of Faustian dilemma: They can get rich, but they might lose their souls,” Grzegorz Piechota wrote in an International News Media Association (INMA) report released last week. “Or, to be precise, they can get access to vast audiences and make some money but risk diluting their brand and losing their direct relationship with users.”

For the report, INMA surveyed 37 news executives from Europe and the U.S. About 80 percent of the surveyed publishers were at websites that had at least 10 million monthly uniques. And about 30 percent of these publishers’ total website visits came from Facebook. Here are five charts from INMA’s study that summarize publishers’ relationships with Facebook.

But publishers aren’t satisfied with all Facebook features. More than half of respondents said they were dissatisfied with the revenue they generate with ads sold against content on Facebook, Facebook’s response to their feedback, and how Facebook has informed them of changes in their products and services.

Mixed feelings about Instant Articles
Although Instant Articles load faster and often have higher engagement than regular Facebook links, the ability to monetize content is reduced when articles are read on Facebook’s platform rather than on publishers’ websites. That’s why some publishers have recently been posting fewer Instant Articles.

INMA researchers theorize that the drop in traffic may be due to changes in Facebook’s algorithms or the use of Instant Articles, which keeps users inside the platform. Either way, they claim that 79 of the top 100 digital publishers in the U.S. saw their Facebook referral traffic decline in the second quarter of 2016. So for a little while, Google maintained an edge over Facebook in referral traffic. 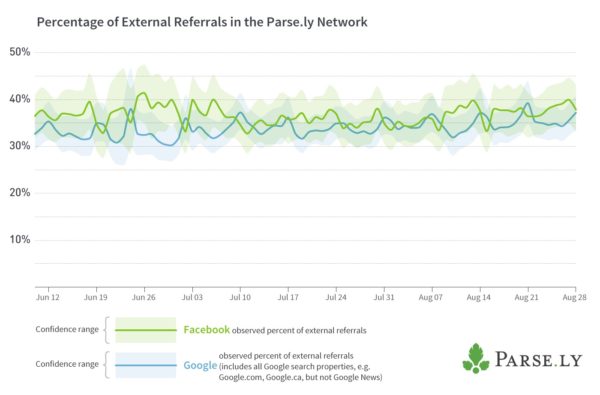 Publishers use different tactics
One publisher, who was satisfied with their relationship with Facebook, anonymously told Digiday that Facebook wants their products to work for publishers. “But only provided that it furthers Facebook’s interests,” the publisher said. “Their interests will always come first.”

The publisher said they were satisfied with Facebook because they “haven’t gone all in on anything, whereas many publications are fully leveraged on Facebook.”

The chart below breaks out how publishers allocate their Facebook content. Traditional publishers tend to use Instant Articles less often that digitally-native publishers. But there are exceptions: Vice News relies primarily on links, while the Washington Post heavily features Instant Articles. 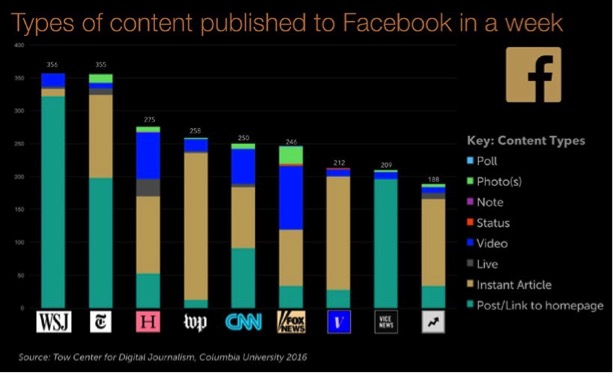 Hopes for future areas of monetization
INMA asked publishers what monetization options they’d like to see Facebook add. More than 80 percent of respondents said they would like Facebook to add branded content (where publishers could earn money by posting with a brand they have a sponsorship with) and subscription buttons.

The least popular option was a tip jar where fans could leave publishers money. Only 11 percent of publishers exhibited this kind of wishful thinking.