Today is A-Level results day, a biggie in the university calendar. Among the hoards of 18-year-olds opening their envelopes, around 12 percent (64,000) won’t get the grades they need for their first choice.

That’s where the process known as clearing comes in. Every year, U.K. universities set up big call centers to snap up students still looking for a spot. While the fierce battle for applicants isn’t new, it is changing. This year universities have taken their talent hunt to Snapchat.

Most are using it to direct their followers to the all-important clearing hotlines. The University of Greenwich has been posting details of its call centre to Snapchat since the early hours. One photo on its account shows the number of calls taken so far: 3,005. Meanwhile, others are going for a softer sell. Keele University, a rural university in the north of England, is offering a tour of its 620-acre campus.

Three of its staff have been filming short soundbites about its halls and facilities from a roving golf cart. They are also taking suggestions on where to go next via the platform’s direct message function. Keele is running an Instagram tour, too.

It’s an uncertain year for universities. While 2015 saw the U.K. government lift the cap on how many students each institution can take on, that doesn’t guarantee a rise in income.

While they enjoyed record numbers of applicants last year, the number of 18-year-olds in the U.K. is dipping. Brexit also looms large over the economy and the U.K.’s ability to attract lucrative foreign students, who pay higher tuition fees.

“With diminishing public funding for universities, they will need to look to innovate at every level in order to secure their futures,” says Bob D’Mello, campaign producer at digital agency Roast. “Anything that gives them a competitive edge over rival institutions and makes them stand out above the noise of results day can only be a positive.”

They’ve been pouring money into social media for a while. But while there’s little evidence Snapchat is working (views for today’s stories are in the hundreds), that won’t stop universities. They want to be wherever millennials are to be found. 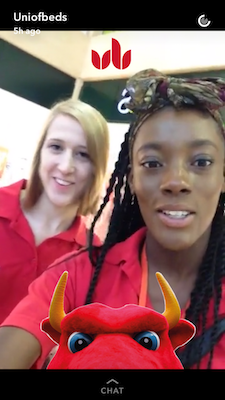 While most of the content is ad hoc and behind-the-scenes, the University of Bedfordshire has actually created a Snapchat Geofilter that covers its campus today. Amanda Hillman, the school’s CRM manager, said the university had already experimented with different overlays on its open days, where they’d had a “popular” response.

The university has also handed over the reigns to its student ambassador Danyelle Shanice, a trainee teacher at the university, who is snapping from its clearing call center. Calls there are up 50 percent on last year.

The University of Staffordshire, which launched its Snapchat account eight months ago, has been using the platform to deliver personal messages of congratulations from its vice chancellor Liz Barnes and other academics. Social media coordinator Laura Allen has been hunting down students who are tweeting about their places and directing them to add the university on Snapchat. There, they’ll receive the short video message.

It’s by no means the university’s biggest platform (Allen says each of its videos get around 150 views) but Allen says it’s still important for the university to be on there.

“It’s a platform for students that’s easy, and one they feel more comfortable using,” she said.