The Martin Agency Wants to Make You Twitterich 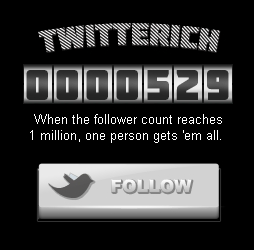 Ever wish you had more Twitter followers? How about a million? If so, The Martin Agency might be able to help.

The company launched a new Twitter-based side project this week dubbed “Twitterich,” through which it plans to build an audience of a million followers for the @1MillionRicher Twitter handle, before handing the account to one of the followers at random. Why? For no reason whatsoever, the agency says.

“It’s an experiment whose only mission is sitting back and seeing what happens,” said Neel Williams, one of the creatives responsible for the idea. The copywriter kicked around the idea for a year with a fellow agency staffer before it finally came to fruition.

The project is being promoted, naturally, through social media, banking on virality taking hold to push the project to the million mark. It has a ways to go. Right now, fewer than 3,000 users follow the account. What happens if it doesn’t reach a million? Nobody’s really considered that. “As long as people keep following us, we plan on pursuing our goal. People will still be using Twitter in the year 2100, right?” Neel said.

There are similar projects afoot. “The Listserv Lottery,” launched in May by NYU students, has a simple proposition: One member each day gets the right to send an email to the growing list of subscribers. (It currently has TK.) The government of Sweden played on this notion with an effort that gave one citizen the right to control the national Twitter account for a day. All these projects, to some degree, play on the primal notion of social media: ego and the desire to be heard.

The Twitterich project might seem pointless, but agencies find value in this type of project that they can ultimately pass on to clients, Neel suggested. “The agency encourages ideas in all their forms. Sometimes these ideas aren’t for a client or profit-driven, but we’ve already learned a lot from this experiment that we can apply to future projects.”

Initiatives such as these are also marketing vehicles for agencies themselves, of course. The project is already attracting press attention, for example, and will likely see more if and when it does reach a million followers.

But even if it doesn’t, Neel said he’s glad his idea finally made it out into the wild. “It’s just fun to make stuff,” he added.