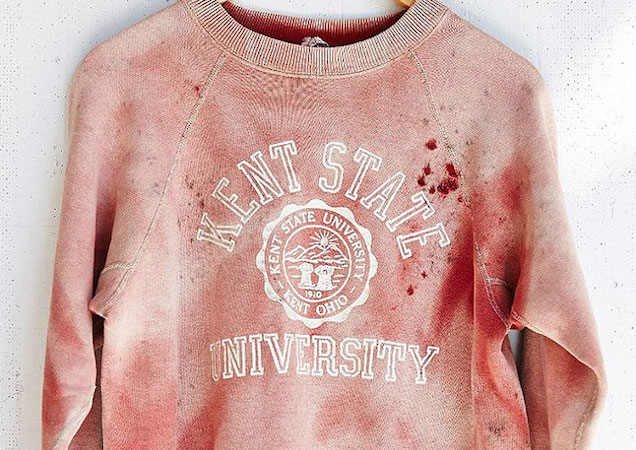 For just $129 you could own a faux-vintage sweatshirt from Kent State University. Complete with fake blood splatters, in what appears to be a nod at the horrific 1970 massacre at the school, the brazenly offensive sweatshirt was on offer at Urban Outfitters. The item “sold out,” according to the retailer, before the company was forced to apologize.

Reprehensible though the sweatshirt was, it’s hardly surprising. It seems like every day, a retailing brand decides it’d be a good idea to try and make money by shilling horrifying, offensive items. Below, the worst offenders in recent years.

1. Urban Outfitters
News broke Monday morning that the company was selling on its site what it was dubbing a “vintage” Kent State University sweatshirt. It featured what appeared to be — wait for it — fake blood stains.

Kent State University lashed out at the retailer in an emailed statement. “We take great offense to a company using our pain for their publicity and profit,” the University’s statement reads. “This item is beyond poor taste and trivializes a loss of life that still hurts the Kent State community today.”

Urban Outfitters apologized and pulled the item, but claimed the stains were not meant to be blood. “Urban Outfitters sincerely apologizes for any offense our Vintage Kent State Sweatshirt may have caused,” a spokesperson said. “It was never our intention to allude to the tragic events that took place at Kent State in 1970 and we are extremely saddened that this item was perceived as such. The one-of-a-kind item was purchased as part of our sun-faded vintage collection. There is no blood on this shirt nor has this item been altered in any way.  The red stains are discoloration from the original shade of the shirt and the holes are from natural wear and fray.”

The sweatshirt is still available on eBay for $550. As of this writing there are zero bids on the item.

2. Zara
Rule of thumb: Anything related to the Holocaust is a bad idea. This summer, Zara tried to sell a child’s pajama shirt that strongly resembled the uniforms of Jewish people imprisoned during the Holocaust. It was striped black and white, and featured a six point star on the chest. 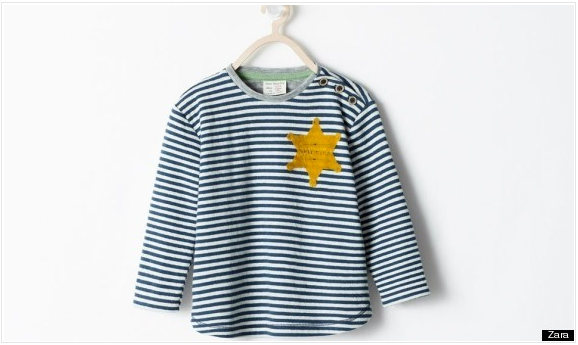 The brand handled it pretty well, apologizing on Twitter. (It has practice: a few years ago it had released a handbag adorned with swastikas, the Hindu religious symbol that the Nazis appropriated.)

3. Walmart, Sears, Amazon
See the above rule of thumb. Walmart, Amazon and Sears were forced to apologize after they tried to sell a commemorative poster featuring a picture of the main entrance to a the Dachau concentration camp. The gate was inscribed with the ominous Nazi slogan “Arbeit Macht Frei,” German for “work makes you free.”

4. H&M
In the spring, Swedish fashion retailer H&M pulled a vest featuring a skull in the center of a Star of David, after shoppers complained that it was anti-Semitic. The retailer had planned to sell the item in Israel.

5. Adidas
In 2012 Adidas created a line of kicks that featured plastic orange chains that wrapped around your ankles. The shoes, called the JS Roundhouse Mids, were slammed online by people who complained that they resembled shackles, and berated Adidas for creating items reminiscent of those worn by slaves. The company initially said that the designs were not offensive, but just the result of quirky designer Jeremy Scott’s outrageous vision

Then, it pulled the shoe.