Why Nest Bedding redesigned its store to mimic its website 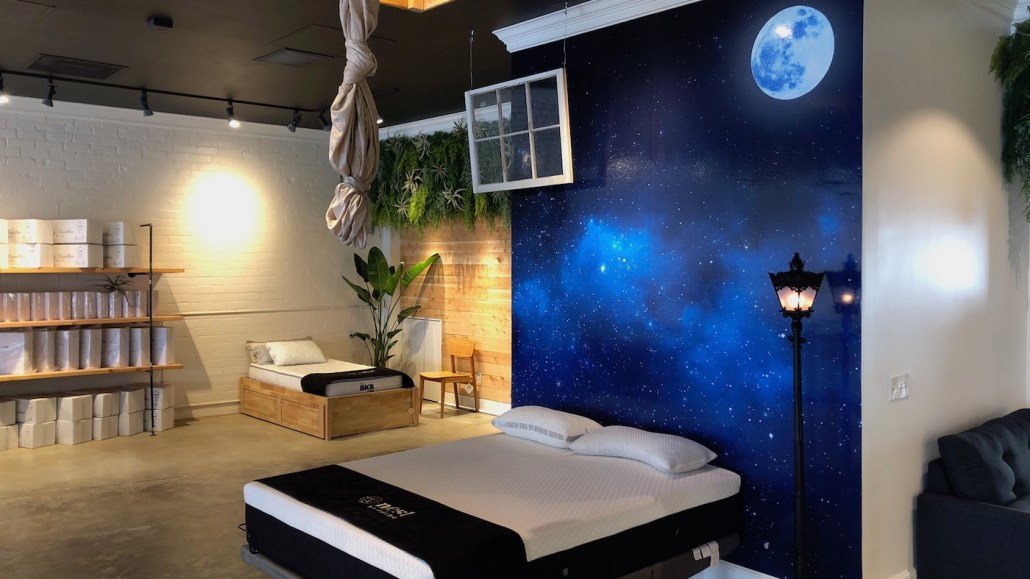 Nest Bedding believes in a mixed online-offline model in its approach to the mattress market. While the majority of its sales take place on its site, Nest operates 11 stories across the U.S..

Recently, the company revamped its Los Angeles store, taking cues from its site experience in the process. It took the dream-like theme found in the photos and videos on its site and carried it into its store’s decor.

“When people walk into a retail store for the time there’s always a little bit of hesitation, especially a mattress store because of their reputation,” Nest Bedding CEO Joe Alexander said. “There’s a lot of mistrust because of traditional stores that would sell name brand products on sale, consumers are looking for reasons to not buy your product. So if I can include more familiar elements they’ve already seen on our site, it’s just going to help them transition to the store and get them to feel the same as when they looked on our site.”

Ten months ago, the company hired photographer Erik Almas to shoot videos and photos of a dream-like scene for the website.

Alexander describes the approach as contrary to most mattress company websites which tend to focus on products using shots of people lying on mattresses. “What we wanted to do was convey emotion and not commodity,” said Alexander. “We want people to think that they can see themselves here instead of oh, they sell beds.”

Nest then decided to transition those elements into its new store. Nest hired a mural company in LA to reproduce the starry sky background scene from its website, and place the mural in the middle of the shop behind the same bed used in the website assets. The company also added items that make appearances in the video: a rope made of sheets hangs from a hatch above the bed, a streetlamp sits on the side of the bed and an antique window hangs above. Alexander wants people to come into the store, recognize the imagery and imagine themselves in the scene.

“The feedback we’ve gotten about our site has been so positive. We’ve gotten that it conveys a feeling of luxury,” said Alexander. “When people walk into the store, I want them to get that same feeling.”

Alexander said that, depending upon visitors’ reactions, it will bring elements from that dream scene to its other stores across the U.S. Nest will have a total of 12 stores by the end of 2018, and is projecting to have 30 stores by 2023.

Nest Bedding is an exception to the trend of mattress-in-a-box startup companies that have emerged in the past couple of years. In 2007, when Alexander first started the company, he made sure that Nest had both a brick-and-mortar location as well as an online presence, believing that an omnichannel strategy was the future. Next has also embraced social media in ways traditional mattress companies have not. In all of its stores it has screens that scroll through its mentions on Twitter, Facebook, Instagram and Pinterest in real time. Nest has also concentrated on opening smaller stores that do not overwhelm customers like traditional mattress companies tend to do, said Alexander.

The company estimates it will close 2018 at above $27 million in sales, up 22 percent from the previous year. Alexander said its revamped store was actually purchased a few months ago from another traditional mattress brand – Sweet Dreams. Sales from Nest Bedding’s brick-and-mortar locations have reached 40 percent of the company’s overall sales.