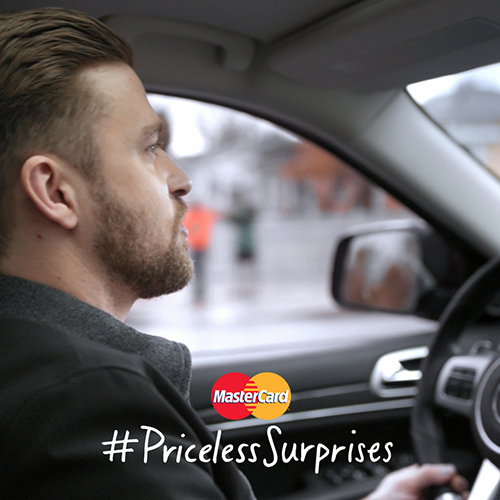 MasterCard is using the Grammy’s as a way to kickoff the next phase of its “Priceless” campaign, which as been running for the last 17 years.

The update to the campaign is around the idea of surprising customers with “Priceless” moments. It’s enlisted none other than Justin Timberlake to surprise a fan and MasterCard holder and filmed the whole thing live with the help of director Bennet Miller (of “Moneyball” fame).

“The Priceless campaign has become an iconic campaign for us, but as part of its evolution we started looking at it differently,” explained Raju Rajamannar, chief marketing officer at MasterCard. “It’s not just about celebrating the priceless moments in people’s lives, we want to create and surprise people with priceless experiences.”

Timberlake is known to prank and surprise his fans — like how he recently pranked fans who thought they were coming in to record part of a song intro. That’s why MasterCard tapped the celeb to help launch the Priceless Surprises campaign during the Grammy’s.

The way that the “Priceless Surprises” campaign works is pretty simple. Any MasterCard customer is eligible to get a variety of small surprises, like cupcakes from Magnolia Bakery, free Uber rides, free  and song downloads. All that MasterCard customers have to do is use their card or Tweet or post to Instagram using #PricelessSurprises. Winners of surprises are chosen randomly. The big surprise is where JT comes in.

MasterCard has already release a teaser of the footage and will be showing the actual JT surprise in a TV spot airing during the Grammy’s. The brand will also use the remainder of the five hours of unscripted footage online across its different social channels and sites.

The hope is that these surprises, both big and small, will not only give back to customers but will also generate social media chatter.

“When you get your surprises, you want to share them with the people in your life and on social media,” said Rajamannar.

MasterCard is also sending the young lady who was surprised by JT at her home to the Grammy’s, so during Grammy night, the brand will be using social to continue to capture and share her experience.

A lot of brands talk about “surprise and delight” as their approach to marketing efforts — which is a phrase we would love to never hear again — but not all that many brand actually do things like this to randomly give back to customers. But there have been others, like Virgin Atlantic’s “Flying in the Face of Ordinary” campaign last March when the airline surprising people in Boston with transportation help or giving them cupcakes.