Marriott’s first foray into Facebook Messenger in March 2016 was a complete disaster. Retargeting customers with ads in Messenger rather than their news feeds immediately misfired, with these ads sliding into customers Facebook inboxes to make unsolicited suggestions. Customers who had recently browsed through rooms at Courtyard Marriott Chicago online, for example, were sent personal messages asking if they still wanted to book a room.

Marriott’s faithful balked and the attempt was euthanized within just two hours.

“Our first entry failed miserably,” said Amanda Moore, senior director of social and digital marketing at Marriott. “But it taught us something — most of all that what we were doing was not what people wanted there.”

In the six months since, it has tested several other approaches on the platform, including launching its Marriott Rewards chatbot in late September. Its first focus is to make it easier for people to link their Marriott and Starwood rewards accounts, the two companies having recently merged.

We spoke to Moore about what the brand has learned on Facebook Messenger over the past six months, starting with its initial misfire. Here are the takeaways:

Messaging apps are not another marketing microphone
Facebook Messenger has been an important and successful tool for customer service for Marriott Rewards for two years. A dedicated team of four to six people monitor the channel and respond to queries at all times. There, the brand met an existing need, responding to people where they already were. Whereas when it sent out the unsolicited offers in March, people hadn’t opted in and it felt invasive.

“The experience reminded us that messaging is a very personal and intimate meant for closed communication,” said Moore. “When brands are intruding in that space and not coming to the table with any kind of value, it doesn’t work.”

You have to be willing to constantly iterate 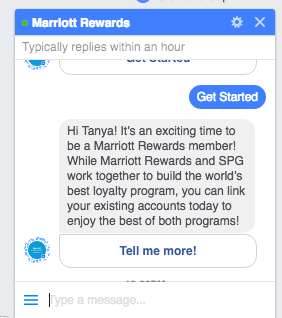 One of the biggest advantages of messaging apps is the real-time, one-on-one interaction they enable. That raises consumers’ expectations, meaning brands must be willing to iterate and learn much faster. When Marriott realized the negative feedback its unwarranted and intrusive dynamic ads in Messenger were getting, it was quick to jump on its feet and pull the plug on it. Even with its latest chatbot, the brand is constantly tracking data and making changes on the fly to improve both the user flow and user experience. It has also stuck to a simple user interface, where the bot guides them through button responses.

“You have to listen to the feedback and take action,” she said. “Messaging is not one of those areas where you have three to six months to test and learn. The feedback is immediate and you need to be nimble in implementing changes and continuously improving.”

Marrying utility and fun is the way to go
Customers interact with brands on messaging platforms expecting a certain utility. If they’re chatting with Sephora, for example, they probably want to know if their preferred lipstick is in stock. Or if they’re talking to Delta, they are perhaps looking for their flight’s gate number. When guests chat with Marriott, they might be looking to book a room for their next vacation, but that doesn’t mean Marriott can’t make that trip more fun. The brand hopes to introduce sticker packs and daily travel tips to Facebook Messenger soon, forging more personal and engaging connections with its customers.

“It’s very important for us that you can easily find and book a hotel easily,” said Moore. “But we also want to arm you with travel stickers, that you can send to your friends while you’re on a trip to Paris.”