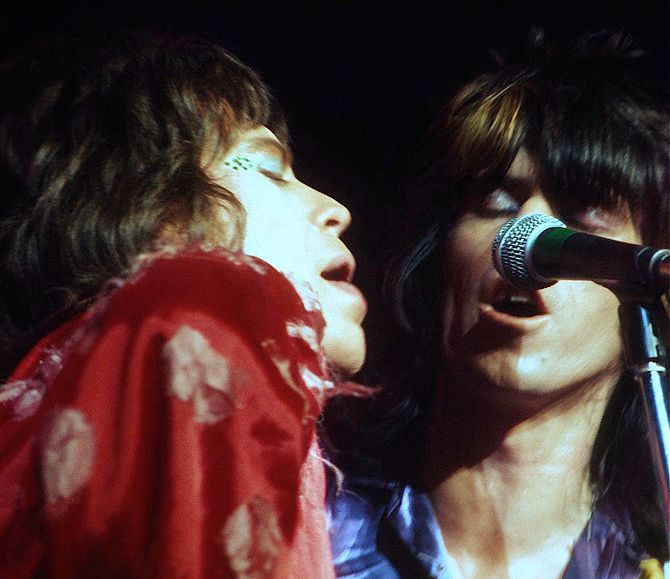 There are few brands as iconic as the Rolling Stones. Rockstars before anyone knew what it meant to be a rockstar, the Stones created the pop music template for sex, sound and thuggery that each subsequent generation has either emulated or rejected.

On Wednesday morning at Advertising Week, Andrew Loog Oldham was on hand to chat with TBWA global creative Rob Schwartz about the “marketing secrets of the Stones.” The Rolling Stones producer, after all, was more image-macher than knob-twiddler – a creative director who oversaw the Stones’ early look, sound, publicity and overall brand.

Digiday caught up with Oldham after his session to pick his brain on marketing, music and Mick. Excerpts:

Craziest Keith Richards story?
It doesn’t really matter if this story is true or not. He went to Paris many years ago with the plan to return to New York in a few days. He stayed in an apartment in Paris and he was leaving for Charles de Gaulle airport he said to his manager: “that was a nice place, could we see if we can buy it?” His manager said to Keith, “Keith it’s yours. You’ve owned it for 20 years”.

You’ve said that you could do things then that would get you arrested or shot today. Can you give an example?
There was a band that had probably more hits than we did at that time. Herman’s Hermits. They weren’t a band, really. On the motorways of England, we used to have a competition where we’d give each other hammers. We’d see the person who could knock the most side-view mirrors off of moving cars from bridge to bridge. It was like tennis but with a hammer. Now you’d get shot.

You started in fashion, which has some obvious overlap with pop. But what background did you have in actual music production?
Absolutely none. I idolized Phil Spector. Some people say for the wrong reasons.

What were the reasons?
He was the first record producer who got recognized, mainly thanks to Tom Wolfe. That article crippled him. He decided, “for the rest of my life I will have guns and bodyguards and I will be terrified of going on airplanes.” But you look at Phil compared to say Leiber and Stoller and others and you say, wow man, he became for the first time more like a movie director.

Could Rolling Stones have become the Rolling Stones if they were starting out today?
I doubt they could. I doubt anybody could because there’s no trenches. You’re not gonna learn sitting at home with a laptop. And where do people play? It’s been pay for play for the last 25 years. But the last band I can think of that did it the old fashioned way was the Police. Got into a van and never got out.

Still, between digital recording technology, the implosion of the studio system, the Internet, even reality TV, the playing field at least appears more level today than ever. Is that an illusion?
No, you’re right. Between auto-tune and Mariah Carey, you don’t actually have to be able to sing. She can sing but it’s the jumping around. The disease of all these shows is they’re like gymnasts. No one is serving the song. They’re only serving themselves which only serves to give the performer a shorter shelf life.

You talk about the phenomenon of the rock star. That the guy or gal up there on stage could be you. Except for what?
There’s no reason why you couldn’t be him because he doesn’t really look like he’s doing anything that different. But of course he is. He’s attractive but you’re not threatened by them sexually. Mick Jagger was very sexy before he became an institutionalized sexual object. But most men in the early days didn’t feel threatened by the puny little guy with child-bearing lips.

“Child-bearing” lips?
I got that from Joan Rivers.

Can you identify a musician today whose branding impresses you?
It’s more a question who manages to cut through the crap and basically stay interested. Jack White’s interesting and he’s keeping himself interested. Dave Grohl is now boring me. He’s this year’s Sylvia Miles; he’ll go to the opening of a fucking envelope.

Do you have an all-time favorite ad?
Probably “I’d Like To Teach the World To Sing.” It was a wonderful rape of whatever fucking culture was going on after Vietnam and 4-F and all that crap. It just captured it so universally. To have a commercial affect me like a pop record was beautiful.

The Stones even did the jingle for a Rice Krispies commercial.
We needed the money then and we were actually flattered that somebody wanted us. We had not had a top-10 hit when we did that. But I said to them, you can’t say who it is. You’ve always got to give yourself a way out. “I’m not a whore, you are.”

What’s the most ridiculous example of a brand attempting to align itself with the Stones?
About 20 years ago Cadbury’s paid 2.5 million to use “Satisfaction.” The reason they paid that much was because they were changing agencies and somebody figured the way to get this deal was to make them spend more money than they had ever spent before.  My job was to go and make sure that it didn’t sound like the Stones. So that was a ridiculous thing to get paid for.

Two-and-a-half million what? Dollars, Pounds?
Who cares? The fucking yen.

Any advice to any band or brand starting out today?
You’ve got to remember who the star is. It’s the product. You only got the gig because you were in the right place in the right time.

Do you feel like a lucky man?
No. I’ve got a thing at the bottom of my email. “You make your own luck; good luck is someone needing you.”