MAC Cosmetics’ Instagram account is often bustling with positive energy, a hub where makeup lovers bond over the latest lip color or DIY tutorial. But things took an ugly turn on Wednesday, when a photo the brand shared elicited a slew of racist comments from a small subset of the brand’s 8 million-plus followers.

MAC shared a backstage photo of a black model wearing its “Matte Royal” lip color at the New York Fashion Week on Wednesday evening. The close-up photo focusing on the model’s lips was quickly bombarded with with racist slurs.

“Nigga lips?,” one user commented, while another likened her lips to “fish lips.” Yet another user wrote “Holy shit I thought this was Jay Z.”

Others were quick to shut down the hate speech, with many women calling out the prejudice and choosing to highlight the beauty of the woman’s features instead. The photo has over 24,000 comments and still counting. 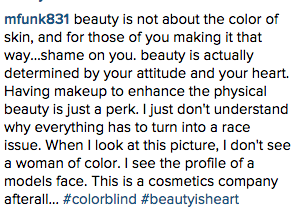 On Thursday, the model under fire, 19-year-old Maryse Kye, responded to both the critical and supportive comments in an Instagram post. “As I turn 20 in a couple days this is a reminder of what I endured in the past and if I survived middle school in america I can get over this,” she said. “The bullying and alienation from others solely based on my features and skin color did not stop me from doing what I want.”

The incident comes shortly after Adidas was at the receiving end of homophobic commentary in response to a picture it posted that depicted two women kissing on Valentine’s Day. The brand responded to its haters with a kiss emoji.

Update: In an ironic twist, model Maryse Kye realized that the photo in question is not hers, but that of fellow model Aamito Stacie Lagum. Kye acknowledged the goof in a post on Instagram on Friday, calling it an “honest mistake” as she had worn similar makeup during a show. She stands by her message of inclusivity, however.

I was just informed that these beautiful lips belong to my beautufl fellow model @aamito_lagum An honest mistake due to the identical makeup i had during a showz although they are not mine I am still humbled to see the love and support shown fom people all over. Much love to everyone because that is the one thing this post did show me