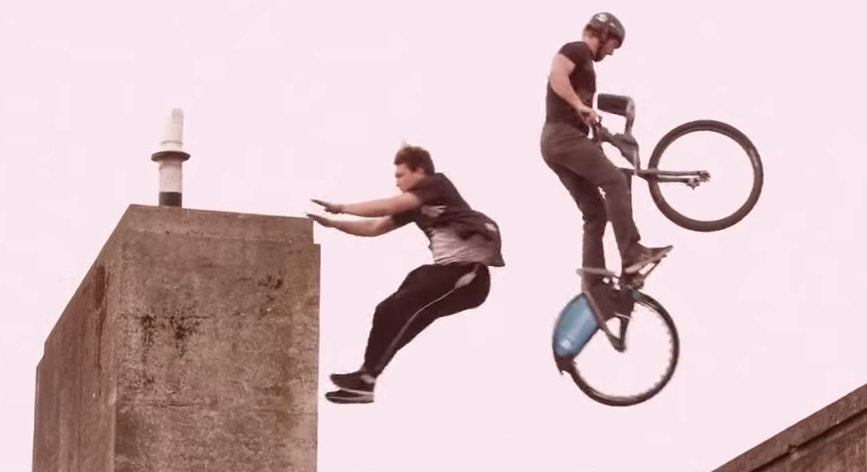 The bikes, which officially go by the more clunky “Barclays Cycle Hire,”  have quickly become a major part of the city’s landscape since their introduction in 2010. Affectionately nicknamed for London mayor Boris Johnson, they make for an attractive centerpiece for a new video that features professional BMX riders using them to pull off impressive tricks on top of major London landmarks. (It’s reminiscent of the treatment given last year to New York City’s Citi Bikes, which is a similar citywide bike-sharing program.)

The video was the product of FightMe, a London-based video startup that lets users record and share 30-second video clips of physical exploits in skateboarding, parkour, and even beatboxing and poetry.

The clip, which has been viewed over 150,000 times since last Tuesday, has already been picked up British news outlets like BBC, ITV, Daily Mail.

FightMe CEO Joelle Hadfield said that the video was meant to draw attention to London’s increasing inhospitality towards the city’s population of skateboarders, freerunners, and stunt bike riders. FightMe hopes that its video will help London realize the importance of spaces like London’s iconic Southbank Centre skatepark, which has become a major creative outlet for the city’s young people.

“We offer a creative space online, and feel like it should be replicated offline as well,” she said.

The situation has gotten more dire as of late. Last year, London announced its plans to close the Southbank, which it planned to relocate and replace with retail space. That plan, however, was shot down in January by mayor Johnson, who called the skatepark a part of the “cultural fabric of London.”

Hadfield said that FightMe’s campaign is already on Johnson’s radar. At an event last week, FightMe’s PR agent asked the mayor whether he had seen the video. “Yes, I love it. I’ve been watching it all day,” the mayor replied.

“It was hard for him not see it. It was everywhere,” Hadfield said.