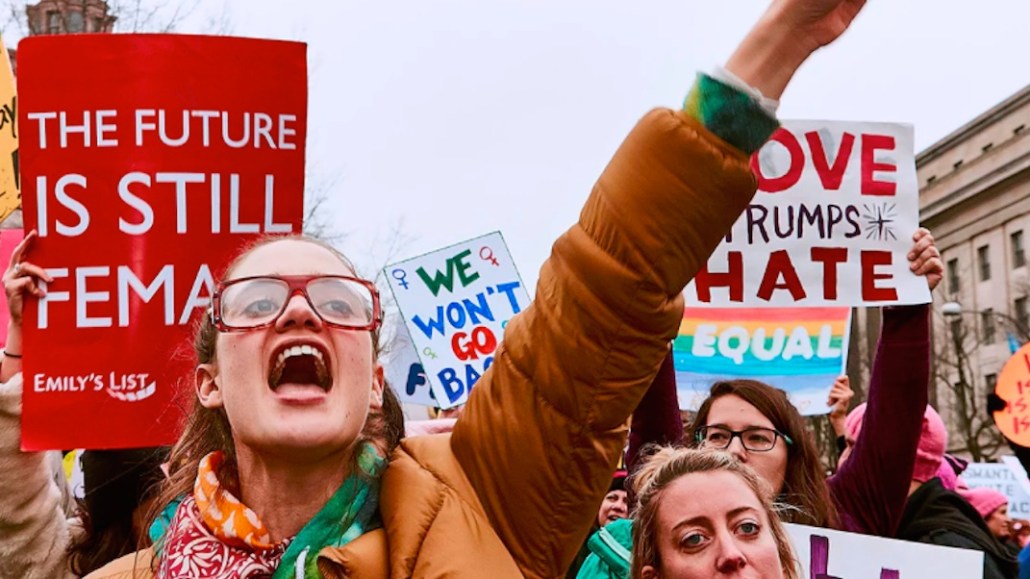 On Jan. 20, a group of people huddled around a screen in a small office inside an advertising agency, cheering and clapping (quietly) as Donald Trump was sworn in as President of the United States. Outside, most of the agency’s employees went home, in tears, or sat around at their desks talking about what was happening in hushed, funereal tones.

It was an eerie scene and one that has played out in varied forms at many of the country’s top agencies since the election.

And for Republican voters in agencies, things have gotten worse since Nov. 8.

“It was always a backlash. Now, it’s a strong backlash,” said one Republican top agency executive who didn’t want to be named. (Indeed, it’s emblematic of how severe the problem is that many Trump voters interviewed for this article didn’t want to be “outed.”) In this executive’s case, many people know within the company this person is a Republican and a Trump voter. But for her, there is a sense of hatred emanating from colleagues that is hard to stomach. “It’s almost like, ‘This is your fault now,’” this person said.

It’s an ironic thing. Agencies pride themselves on being open-minded, to people of all ethnicities, nationalities, sexual orientations and backgrounds. But on this particular point, diversity of political persuasion need not apply. Agencies frequently lean liberal: Most happen to be in blue states and in urban areas, and they are also largely staffed by younger people, who tend to be liberal.

“They’re doing the opposite of what they think they want to,” said one Trump-voting executive. “They’re not being diverse or inclusive. They’re being exclusive.”

“Like I’m evil”
What often happens is that the Trump voters are called out and asked for their opinions on what is happening in the country or what is being directed by the White House. “People now look at me like I’m evil,” said one executive whose office knows that she is a Trump supporter. “It causes a lot of emotional reaction to things.”

During the Bush years, this executive said, she often felt like she was hated. When the Dixie Chicks’ Natalie Maines famously  spoke her mind about President Bush and the Iraq War, it almost gave people permission to be more vocal. Now take that and multiply it by 100. “Snoop Dogg now has a video in which he’s shooting Trump in the head. People in media and entertainment are liberal. You can imagine how people think they have permission to say what they want to me,” said the Trump-supporting exec.

Greg Andersen, CEO of Bailey Lauerman in Omaha, Nebraska, said that there is a tendency he’s noticed on the coasts to believe that everyone in the country has the same aspirations and dreams. When he used to live in New York, he’d bet people $100 they couldn’t name the states bordering Nebraska. In 26 years, nobody won the bet.

In Nebraska, it’s a little more balanced: Omaha as an urban center has its share of liberals, so the agency is relatively balanced. “There were people crying when Hillary Clinton made her concession speech. There were also people whooping quietly. We just don’t really have that discussion.”

Some agencies have seen the election as a call to get in touch with non-coastal America, where many of their clients’ customer bases live. That can lead to further issues as red-state voters are viewed as distinct species.

“Everyone on the left acts like they’re smarter than me or than other Republicans,” said a New York Trump supporter. “It’s smug. And I keep getting called out in scenarios as the ‘Trump voter’ in the room.”

For agency Republicans, they’re suddenly being asked their thoughts on previously personal issues, being put into the uncomfortable position of being the focus group that can answer questions about “middle America” better than anyone else. “I remember being asked my views on immigration, or refugees, when a client wanted to do some work that would be aimed at conservative Americans. I don’t pretend to be educated on the subject. I don’t have control over laws and rules of immigration.”

M.A. Moutoussis, engagement director at Huge, who was in President George W. Bush’s administration in the office of the staff secretary, said it’s pretty “well-known” that she’s a Republican. She declined to specify whether she voted for Trump. And she’s rather people not assume she’s a spokesperson for him. It’s just not for her: “I don’t think politics plays a role at work for me. I didn’t come to Huge to work on political issues.”

‘What happens if we don’t win?’
Even at Huge, there have been moves that could be seen as partisan. For example, on Jan. 21, the agency’s D.C. office became a makeshift hotel, setting up places to sleep for staffers coming to the city for the Women’s March. While the march was considered non-partisan, people made signs including those that were anti-Trump.

The company also made a “panic button” to help immigrants call for help during raids. For Kate Watts, U.S. president, whose idea it was to turn the D.C. office into a place to gather, it was a tricky balance. “You don’t want to be a hypocrite. You can’t assume everyone believes what we do. I was very protective of people like [Motoussis.] But at the same time, Huge wants to believe what it believes in.”

Does that alienate people like Motoussis? She says not really. “We all want to make the world a better place.” It’s just how they want to do it that may diverge.

For agencies, which are also professional companies, leadership has to be extra careful. On one hand, this election has meant they have to be true to their values. On the other hand, they can’t be seen as discriminatory. During a monthly fireside chat before Election Day with Watts, where staffers can send in questions anonymously, someone asked Watts, “What happens if we don’t win?”

“I said, ‘Wait a minute. Stop. Who is we?’” recalled Watts. “You just made people supporting Trump feel alone and threatened. For anyone to sit here and assume is small and narrow minded.”

Brennen Roberts, a conservative, but a non-Trump voter who is managing director of the Chicago office of Iris, said that he doesn’t want to bring politics into the office. But there are vocal people, mostly on the left, since the agency tends to be left-leaning. After the election, he sent an email reminding people to be understanding of emotion, passion and being respectful.

“My ears perk up around particular conversation; I’m sensitive to red flags. It’s like talking about the weather: It can become about climate change if you’re not careful.” And of course, you don’t want to risk pissing off a client who may lean right with your incessant anti-Trump talk.

But while agency leadership grapples with a crisis of identity, small groups are springing up across the industry. One Trump voter said people who know her affiliations have come to her. They meet in secret to discuss issues and talk about things, in a scene that resembles the McCarthyism period of the 1950s. In one example, the “calling card” is one person’s screensaver, which features Trump and First Lady Melania Trump that lets people know his affiliation.

For Moutoussis, she said while she doesn’t want to get political at work, she encourages other conservative individuals to discuss their affiliations. “We might not be speaking out, but that doesn’t mean we’re not here. We saw as a nation how polarizing this was. People who are engaged give a shit.”

For the Trump voter on the West Coast, it’s different: She’d prefer if everyone just shut up. “Your political beliefs are like your religious beliefs. It’s not a company’s job. I don’t think you benefit by giving your employees an occasion to march. They can take the day off and do it,” she said. “My personal opinion gets uncomfortable for people. And when people find out you don’t think like them, it’s like they want to explain to you why you should. I live through a political version of mansplaining every day.”