Take an Oculus Rift test drive of the new Lexus 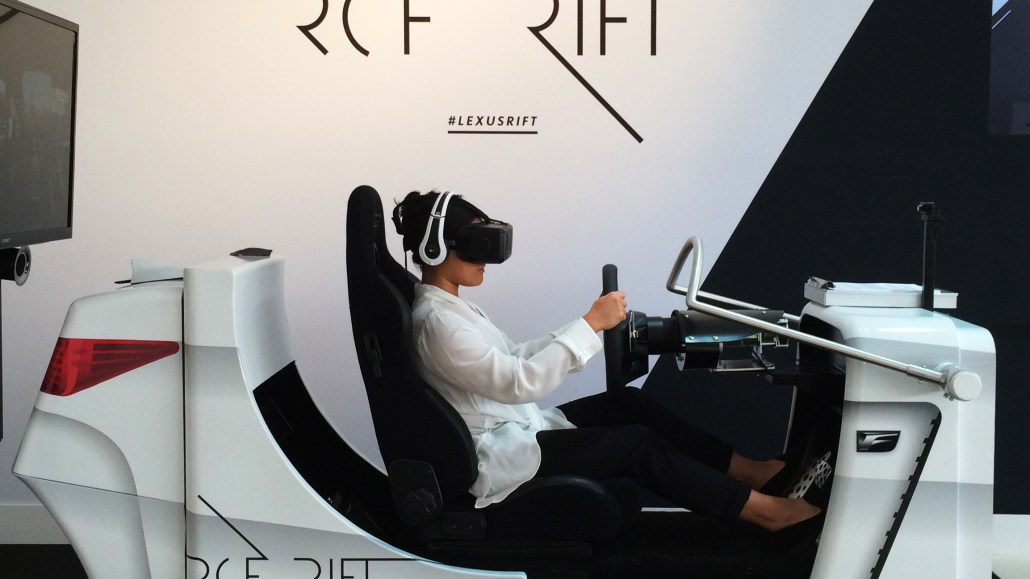 In the market for a luxury car? Now you can test drive one that hasn’t come out yet without actually putting any rubber to the road. Lexus and its agency Team One have developed a motion-controlled driving simulator using the Oculus Rift DK 2, which lets users take a ride in its upcoming 2015 RC F Sports coupe.

There has has been no shortage of virtual-reality campaigns recently. Marriott Hotels sent to travelers to Hawaii and London. HBO’s “Game of Thrones” gave viewers  a sneak-peak of its fictional setting. Even Chrysler is giving car enthusiasts a virtual tour of its 5 million square-foot factory.

The RC F Rift, as it has been called, is reminiscent of arcade driving games. Participants sit behind an actual RC F steering wheel and foot pedals and don the Oculus Rift viewer for an immersive experience. They can take a virtual drive on some of the world’s most famous racetracks like the Fuji Speedway, all without risking a speeding ticket. While the beta version debuted at the Pebble Beach Concours d’Elegance in August, the latest iteration was for all to see this past weekend at the Orange County Auto Show.

“It is like a driving simulator on Oculus Rift steroids,” Will Nicklas, corporate manager at Lexus marketing, planning and communications, told Digiday. “High-performance sports car fans are into technology, so this was a great way for us to articulate our passion for technology and innovation to them.”

The 2015 Lexus RC F will be in markets early next month, and the driving simulator will be traveling to auto shows in Las Vegas, Los Angeles and Detroit. Additionally, Lexus is also offering its consumers to take the car for a test-drive in Chicago, Englishtown, New Jersey, and Atlanta over the next few weeks.

The campaign also has a crowdsourced element, in which it asks its Facebook fans to come up with the name for one of RC F’s colors, a flaming orange. Some submissions so far: “Solar Flare,” “Daybreak” and, uh, “Agent Orange.”

“The idea was to get our fans involved with the brand have a deeper relationship with it and be connected in a super-fun way,” Nicklas said.