How esports grew up: An oral history 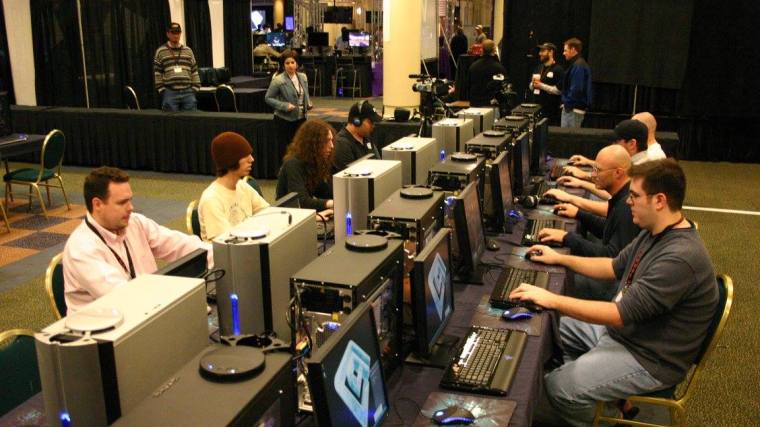 Andrew Arato
September 2, 2022  •  9 min read | By Alexander Lee
This article is also available in Spanish. Please use the toggle above the headline to switch languages. Visit digiday.com/es to read more content in Spanish.

With its arena-filling events and six-figure salaries, the esports industry has come a long way since the early days of competitive gaming.

The first video game tournament took place in 1972 — a Spacewar! bracket hosted by Stanford’s Artificial Intelligence Laboratory — but it took far longer for game developers to realize the potential value of competitive gaming as both a product and marketing channel. For decades, competitive gamers languished on the sidelines, dodging developers’ cease-and-desist letters and playing primarily for passion, not prizes. The word “esports” didn’t exist until 2000, when Korean minister of culture, sports and tourism Park Jie-won combined the words “electronic” and “sports” to coin the term.

Fast forward to the present, and advertisers are pumping millions of dollars into the esports industry in a bid to reach gaming consumers. Game developers have spent years developing structured competitive leagues such as the Overwatch League and League of Legends Championship Series, understanding that esports fandom is a driver of casual gaming activity. By and large, this rising tide has lifted most esports-company boats — but that doesn’t mean the expansion of esports hasn’t had its fair share of growing pains.

Here’s the story of esports’ evolution from the grassroots days to today’s corporate landscape, in the words of esports-industry experts and OGs.

Before game developers and non-endemic brands embraced esports, the pioneers of competitive gaming largely existed on the margins, relying on passion and volunteer work to keep tournaments running.

Mike Sepso, CEO of Vindex and co-founder of Major League Gaming: Some of the people I met for the first time in the corporate suite said, “I knew your name because I saw it on a cease-and-desist letter.” That’s how I’d characterize the difference. When esports really started, whether it was ESL [Electronic Sports League] or MLG [Major League Gaming], it was kind of people trying to do something that they wanted to participate in and institutionalize and commercialize, but none of us had ever worked in the video game industry before. So our expectations for how things should work were very different from the way that the studios and publishers thought of it. Keep in mind, early ESL and MLG events didn’t even have spectator passes, because nobody came to watch — it was just a tournament to play in.

Daniel Lee, tokenomics designer at Heroic Journey, former League of Legends general manager at Counter Logic Gaming, and a former top-100-ranked Super Smash Bros. Melee player: From a cultural standpoint, it was just about the love of the game. I think part of the nice thing of being really early into a space, where it’s not really high stakes, is that you can kind of just do whatever you want. We’d go to majors and have, like, 16 people in a hotel room. Sitting really packed behind a CRT [television] to see a player play, whereas there’s projectors now. We were all bootstrapping it; we didn’t really have much corporate interest.

Rod Breslau, pioneering esports journalist and consultant: It was all self-sufficient; that’s how everybody did stuff. There were some paid gigs, but you really did it for the love of the game — which was Quake, back then. Then GotFrag was created in North America, which was the main hub for Counter-Strike, then grew out to cover other games. That was really the first time in the West that you could get paid for esports journalism.

Jason Baker, managing director of Do Not Peek Entertainment: The early days were really built around you and your buddies traveling to an event, filling up the car full of your own personal computer equipment, and going to a LAN and playing at an event. It would be the bring-your-own-computer section of a LAN. It was like, “hey, everybody, we’re going to have a Return to Castle Wolfenstein tournament.” Sign-ups were on this bulletin board, or whatever, and you’d play this little thing. And you didn’t go there to play this game, but, “all right, I’ll play this.”

The early esports scene was glaringly white and male — though it still boasted its fair share of women, such as Heather Garozzo, who was a top-level Counter-Strike player before becoming an esports executive. But these days, it’s clear that misconceptions about the esports scene being a monolith are no longer true. Women and players of color abound in esports these days, and brands have responded by stepping up their marketing spend to reach the gaming audience.

Heather Garozzo, vp of community and events at Dignitas: I always regret the fact that a lot of people say, “women aren’t as good as men,” or “women can’t compete in the top leagues.” I was in the top league, but no one really remembers that, because social media and streaming weren’t as big. Certainly, there are simply more women playing, there’s no doubt about that. It’s become more culturally accepted to be a gamer. I had a chat with my 10-year-old niece the other day; all of her friends are playing Valorant. And because there are more women in the spotlight, you feel more confident. Over the years, going to different events as an observer and having young women come up to me and start crying and hugging me — I didn’t really know how to react.

Sepso: There’s definitely more gender parity now. In the early days, in the Counter-Strike and Halo worlds, there were not a lot of women. Now, across the board, gaming is sort of non-gender-specific as an activity, so I think the fan bases are much more equitable.

Baker: The majority was always white teens, usually 16 through their early 20s — and I would still say that’s the majority. But there was lots of stuff in Texas and lots of groups coming from Southern California. You had lots of Latinos, lots of women at the events, either volunteering or helping run communities or just being players on teams. So I would say that women have always been part of the scene, and when people act like they don’t belong, that just seems so weird to me.

03
Pivoting away from competition

As the esports audience widened, esports organizations gradually pivoted their rosters from a hardcore focus on competition to a mix of competitive gamers, content creators and influencers. To those who have been in the industry for more than a few years, the word “esports” specifically describes high-level professional competition, often in one of the major franchised leagues — but to most non-endemic brand marketers, it’s a catch-all term for a range of entry points into the gaming community. These days, competing is not necessarily the easiest way to become a gaming influencer.

Garozzo: It’s not necessarily a bad thing, because when you look at the organizations that are the most successful, like 100 Thieves, they’re a lifestyle brand, in a sense, and their [competitive] players are in very little content because they simply don’t have the time. It’s incredibly demanding to be a professional player and stay on the top. So the creators give you a little more flexibility.

Sepso: The creator economy, in the gaming space, clearly grew out of esports. All of the first generation of people who were big creators — you know, Hector with OpTic, Nadeshot, Ninja. Those guys were all esports scene people. Maybe not the best competitors, but they moved quickly into making YouTube videos about gaming, and started in the esports scene. Now, most of the big esports teams have the biggest gaming creators in their portfolio too.

Jason Lake, CEO of Complexity: Competition will always be Complexity’s north star, but diversification is becoming increasingly more important in esports. Rather than sitting back with a dusty brand, we’re constantly exploring how we can push the envelope. Coming up to our 20-year anniversary, we’re continuing to expand the Complexity legacy with creators like TimTheTatman and Cloakzy.

04
Dark money on the horizon

As the industry continues to grow, esports companies are beginning to cast a wider net in search of funding — and coming under increasing scrutiny from both fans and investors alike. Some esports fans have been critical of esports companies that have received investments or sponsorships from crypto companies and entities such as the Saudi Arabian government.

Garozzo: Years ago, you either had a buddy whose parents had a lot of money, and they funded it, or you found some individual sponsors, and then that went directly to the players. Obviously, there are a lot of VCs that are invested, so it’s not like the money [these days] is going directly from the sponsors into the players’ pockets. But I know there’s a lot of rich people making bets on esports, and that’s exciting. It can be scary, too, but more money is generally a good thing.

Jordan Fragen, journalist at Esports Insider: It’s a bit of a false premise to say that dark money is a new thing to esports. There’s always been very shady people involved in esports. I think Moscow 5 is probably the best example of this, where they got busted by the FBI for stealing peoples’ credit cards; it was just a money laundering scheme. But I think what’s changing is the amount and scale. Right now, obviously, the Saudis have consolidated their ownership of FACEIT, ESL and DreamHack. When you have all of the major tournament organizers being owned by the PIF, it creates a different tone and tenor to the industry.

Baker: ESL and Blast, they all take some very questionable money. But the 2007-2008 Counter-Strike stuff definitely had lots of questionable money, and even early Counter-Strike had lots of really interesting, questionable gambling money. So I would say it hasn’t changed, in that way — it’s always been like that. There’s the desire to have competitive gaming, but it’s not always easy to recoup your costs. So you’ve got to have people that are willing to take that risk. And sometimes, it’s ventures of, I wouldn’t say shady companies, but of questionable companies, some of them.