How to Fix the Republican Brand Problem 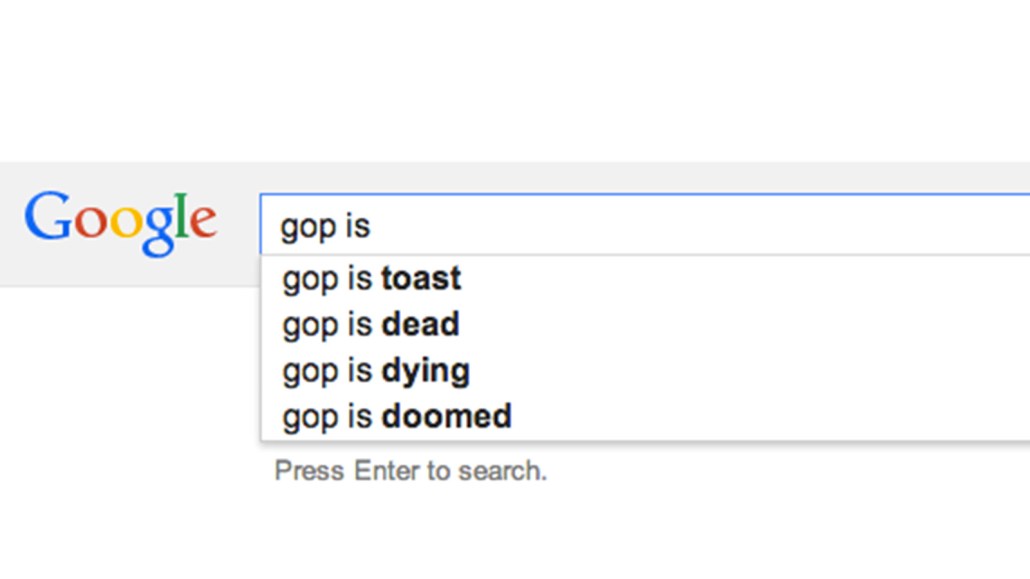 The end of the government shutdown Wednesday came with both good news and bad news for the Congressional Republicans who so bitterly battled President Obama over the new health care law and lost.

The bad news is that the Grand Old Party has its lowest approval ratings in recorded history. According to recent polls by Pew and the Wall Street Journal and NBC, up to 72 percent of Americans disapprove of the Republicans in office.

The good news for the party is that their brand reputation can only get better from here.

Branding and communications experts tell Digiday that the first thing the party can do to improve its image is to figure out what it stands for – and how to communicate it. The GOP stands for the shutdown at the moment, experts say. There is no cohesive identity, and there are too many rogue factions within the party that are getting too much air time.

“They need to sit in a room and figure out, ‘what are three-to-five things we stand for, and what did people put us in office to do?’” said one communications exec at a large PR agency who requested anonymity because the exec’s firm works with politicians. “They have to determine what their brand is and what it is they’re selling, and need to come out unified around that going into 2014. And it needs to be clear.”

As far as the actual content of that messaging, it’s time to stop going negative, say experts.

“Fundamental Republican ideals can easily inspire but not when framed in the language of destruction,” said Nicolas Boillot, CEO of strategic communications company HB Agency. “What’s broken, what won’t work, how to destroy initiatives perceived to be from the other side: the Republicans consistently broadcast negative messaging.”

Will Bunnett, a senior strategist at Trilogy Interactive, and a former producer at Obama for America, said that in spite of these problems, Republicans have a successful niche brand at the moment – the base isn’t going anywhere. So they need to find a way to convince new voters that the Republican brand is relevant to them. That’s going to be hard to do without a strong, visible leader.

“It’s very similar to the branding problem Apple had in the early ‘90s, when it had a small, devoted following, but its brand didn’t seem relevant to most PC users,” Bunnett said. “Apple fixed its brand problem with innovative products and design. But without a Steve Jobs-like leader, Republicans will have a hard time innovating.”

“Anything else would not work,” Knyszewski said. “It’s like cutting off a limb to save a hand from gangrene. That’s where they are now. Their own body attacks and destroys itself. They need to start from scratch.”

Not everyone sees it that way, though. The 2014 midterm elections won’t be held until next November, and a year is a lifetime in American politics.

“As egregious as this was, the fact is these things are ephemeral, and people will forget,” said Peter Himler, founder of Flatiron Communications. The GOP, he said, doesn’t actually have to change a thing for it to fix its brand reputation.

“Time will heal. People have short attention spans. The Republicans don’t need to do much. By the time the 2014 midterms roll around, this will be in the rearview mirror.”