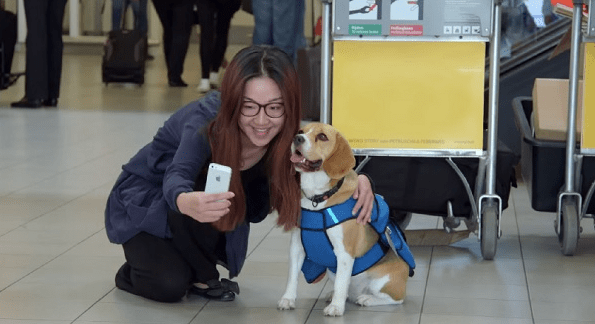 Digiday is launching a new monthly feature that will highlight interesting, creative, funny or otherwise notable digital projects from around the globe. While these lists are by no means meant to be comprehensive; it is our intent to shine a light on the rest of the world’s current best. Please send me tips.

Digital creativity knows no bounds — quite literally. Agencies, brands and even independent creatives from around the world have constantly endeavored to surprise, engage and innovate. An agency creative from BBDO South China, for example, charmed us a few months ago by documenting a year of AirBnb adventures. BETC, an agency from France, recently pioneered a sports marketing app. A Russian agency Instinct used Instagram to build an IKEA online catalog.

Here, then are seven of the most recent examples of digital creativity from the rest of the world:

The police department of Iceland’s capital city could surely give us a lesson or two about rebranding the police. Its official Instagram account went viral recently, amassing more than 66,000 followers for its perfect mix of work and play. Icelandic cops are clearly unafraid to to have a good time. From funny-faced selfies, to snuggling with kittens, birds and dogs, to posing with cute kids in animal costumes, this account will make you go “aww.” Until the crime rate spikes, that is.

Perfectly timed to come out before the Jewish New Year, Israeli charity organization “Latet” partnered with BBR Saatchi & Saatchi to roll out the first Jewish emoji app, that lets users illustrate their text messages with funny Jewish-oriented icons. The app also serves as a fundraising platform and gives users the ability to donate a meal with just the click of a button. According to a representative, the organization has raised 4 million Israeli new shekels ($1 million) so far this year, and hopes that more will be raised through the app.

The desi twitterati is at it RT @antofa @rogerfederer How about a leading role in a #Bollywood movie? #PhotoshopRF pic.twitter.com/9iMrOKI1Sg

The top-ranking tennis star doesn’t need a lot of help with his personal brand, but he received a lot of love from his fans in India when he announced that he was going to visit the country in December. His plans really went viral, however, when he asked fans to Photoshop pictures of him visiting specific spots. With the hashtag #PhotoshopRF, the results had him taking a ride in a typical New Delhi auto-rickshaw, standing in front of the Taj Mahal, and even being morphed onto a Bollywood-inspired movie poster. He later retweeted his favorites.

There’s a four-legged hero leading the efforts at KLM’s lost-and-found service at Amsterdam Airport Schiphol: an adorable beagle named “Sherlock.” KLM, wanting to return lost items to their legitimate owners in a timely fashion, monitors Twitter and other social channels for mentions of lost things. Then it deploys Sherlock to hunt them down — and return them in person. The added bonus is a little pet therapy along with the returned lost goods. When’s the next flight to Amsterdam again?

Following the brutal murders of James Foley and David Haines by ISIS, U.K.-based organization Active Change Foundation that promotes integration among communities, rolled out a social media campaign condemning ISIS. Featuring a number of British Muslims, it is a reminder that ISIS does not represent the Muslim population in the slightest. It has gained tremendous traction socially since it launched on Sept. 10, with more than 41,000 tweets mentioning the hashtag #NotInMyName over the past one week itself, according to Topsy.

While this project is still in progress, it represents the Scandinavian nation trying to build a new national symbol for itself — ironically with the help of its next-door neighbor and rival, Sweden. Pioneered by Finnish creative agency Bob the Robot, the “goodwill” initiative seeks to give the Finns a new national symbol they can be proud of, and it has Swedish designer Henrik Nygren at the helm. This new “national identity” of Finland will be designed in Sweden and presented during Eurobest, a European creativity festival, in December.

Nescafé as a brand is almost indistinguishable from its iconic red mug. Croatian agency Drap understands that, so in an effort to reach out socially on behalf of the brand, the agency launched an interactive campaign where it tied a thousand Nescafé mugs to a bridge in Zagreb. Fans were encouraged to find and unlock them using a code generated by an app. The fans could then go to Nescafé booths for a warm cuppa and also claim another mug.