Copyranter: Maybe the ‘Big Idea’ isn’t dead after all

If I were a CMO? I’d run my brand downtown to the Wall Street office of Droga5 and scream, Fry-like, “Shut up and take my money,” give Dave Droga a blank check, and then go to the lobby and sleep on their couch for two weeks or so, use Droga’s private shower, eat their food, go to New York Dolls with a couple of their chatty account doofs, watch them make it rain singles on strippers — all while their creatives worked 18 hour days on my Big Idea.

Droga5 is the ad agency behind Newcastle Brown Ale. “No Bollocks” has been the British brand’s tagline and positioning for about three years now. And since then, it hasn’t merely been the best beer advertising going, it’s been one of the best ad campaigns out there period, creatively and persuasively.

It is proof of the power of the “Big Idea” — a Golden Age holdover many of today’s digital content gurus/whisperers/disrupters (their Twitter bio terms, not mine) would love to kill forever because it doesn’t fit into their small, fragmented plans. The No Bollocks work has made big budget beer ads like those from Budweiser and MillerCoors look even dumber and faker than they already were. And the idea has been executed brilliantly and consistently across all “touchpoints”: print, TV, video, point-of-purchase, Twitter, Facebook, etc.

Here’s some of the work.

This is Newcastle’s latest stunt from late last month, in which they perfectly mocked stupid branded content and product placements by “partnering” with The History Channel’s popular show “Vikings.” They even distributed a Viking Ale draft across America in a limited release.

Prior to this year’s Super Bowl, they crashed Doritos’ Crash The Super Bowl Party with a spot funnier than any of the real spots. Then, they crashed the game itself with the above ridiculous co-op Band Of Brands commercial, an ad with over 1.5 million views that was promoted wonderfully with spots featuring actress Aubrey Plaza and her “naturally sarcastic” voice. It was, one of the best spokesmodel choices in the history of advertising.

When the campaign launched in 2012, they sent up all the stupid “heritage” alcohol ads (serious-as-cancer Coors’s talking in front of mountains come to mind) with this TV spot. They punked people watching soundless TV in bars with this spot. Then last year, they used comedian/actor Stephen Merchant to crash America’s Independence Day party.

Call it Crashvertising™. What Droga5 is doing with the No Bollocks concept is perfect for a smaller budget challenger brand. They even crashed Budweiser’s laughably pointless “bowtie” can introduction two years ago. Bud spent three years developing the can. Newcastle spent…a lot less time making theirs, which they posted for their Facebook fans (now near one million total).

Their most “social” move was last August’s #NewcastleAdAid where they got Twitter and Facebook followers to send them personal photos which they then turned into absolutely awful yet hilarious Photoshopped ads for Newcastle—an effort that slyly derided all the “post your photos using our product!” social media malarkey while fully committing to it at the same time. That’s engagement baby, with none of the condescending disingenuousness. They got to have their beer and drink it too. 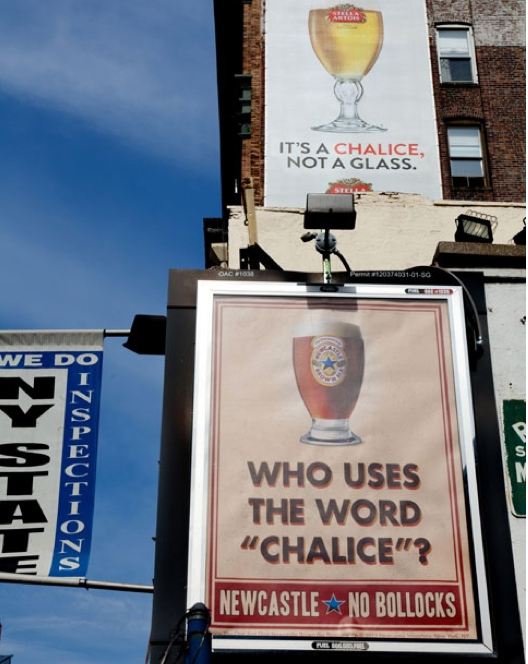 But their best brand crash was with this New York City billboard hijacking, which helped launch the new campaign in April 2012. Stella is of course a direct competitor in their premium beer niche market.

And guess what? the campaign increased sales within six months, and it’s still working. Because that’s what Big Ideas can do that all the giddy retweets in the goddamn world can’t do: work. Work that works: how novel these days. And this Big Idea is working for two reasons: it’s entertaining as hell and just as important, it feels true to the brand. Many brands, even other beer brands, have tried this “authentic” approach. But right now, nobody is doing it better than Newcastle.

NOTE: This is not “sponsored” “branded” “native” “content” for either Droga5 or Newcastle.