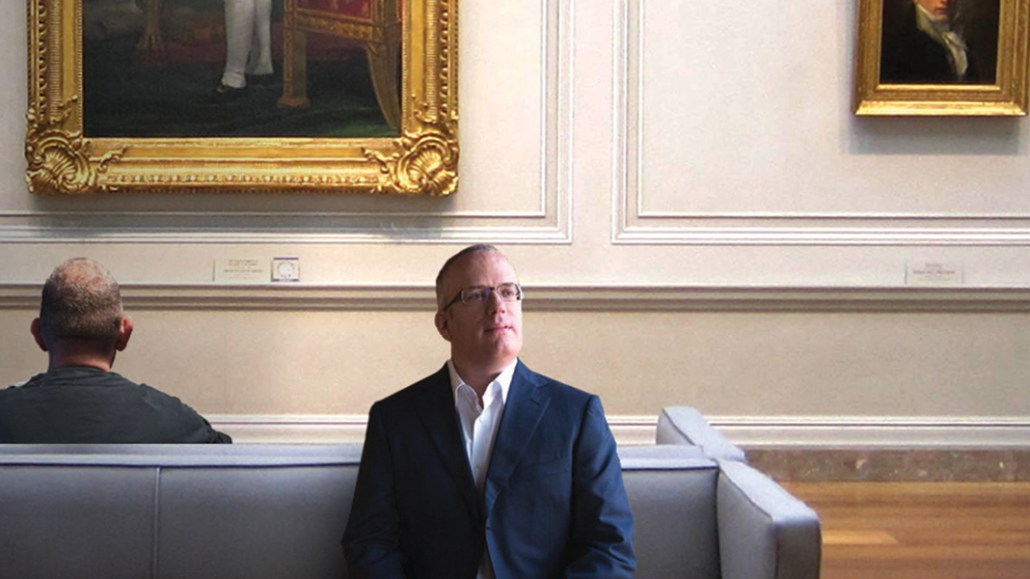 Brendan Eich knows how the web works — and how to fix it.

The inventor of JavaScript while at Netscape is now occupied with growing a new browser, Brave, which promises to be far faster than entrenched leaders like Google Chrome. The trick: Brave blocks data-hogging ads and flips the web’s publishing model. Instead of advertisers paying publishers or ad networks to serve their ads, they’d pay Brave, which serves only privacy-protecting ads.

If it works — and that, admittedly is a big if considering the most powerful companies in the world are invested in the status quo — it could turn digital advertising on its head and put users back in control. With a user base of about 1 million, Brave’s still a rounding error in browser market share terms. But Eich is playing a long game. His goal is to get to 7 million users, the number he thinks will get marketers’ attention. And he’s aiming at the early adopters, people who care about speed and privacy as much as he does. Once they adopt Brave in large numbers, millions more people will follow. “The lead users always drive markets,” he says. “And that’ll influence the whole market.”

Reinventing how the web is funded sounds like a long shot, but if anyone has the credentials, it’s Eich. He created JavaScript, the most widely used programming language. Then, he co-founded Mozilla, which created Firefox and restarted the browser market (stepping down in 2014 after facing criticism over his contribution to support Proposition 8, a proposed same-sex marriage ban in California). People who have worked with Eich speak of him with respect and awe.

“He’s a fucking rock star,” says Darren Herman, who was briefly vp of content services at Mozilla and is now at Bain Capital. “If you have a counterargument, you better make sure your argument is solid. He’s just on another wavelength.”

“He can see things before others can see them,” says Andreas Gal, who went to Mozilla in 2008 to work with Eich on JavaScript and served as Mozilla’s CTO from 2014 to 2015. Gal says that when he was considering the offer, he was still a grad student, and “I was being told by the smartest researchers in the world that spending time making JavaScript fast was a waste of time. Today, all these billion-dollar businesses emerged on top of the web that Brendan built.”

The idealist
But something happened along the way. Eich saw how advertising was taking over the internet, polluting it with third-party trackers that slowed down page speed and tracked users’ behavior; gave rise to malware, ad fraud and ad blocking and taking revenue out of publishers’ pockets. “Advertising took a wrong turn on the internet,” he says. “We think there’s a better world.”

He raised $7 million in seed money to co-found Brave with Brian Bondy, who worked on Firefox and Khan Academy. The idea was to block ads and replace them with Brave’s own, privacy-protecting ads, sharing the revenue with publishers and advertisers. Eich realized that Brave needs to get a much bigger audience to get publishers and advertisers on board, though. So in the immediate term, Eich wants to make people’s attention the currency of the web.

In March, Brave introduced a digital token, called the Basic Attention Token, that will let people earn currency by viewing ads. (“Putting change in users’ pockets has not been done before,” Eich says.) He raised $35 million right off the bat, which should give Brave funding for several years and allow it to give currency to users that they can in turn use to help fund publishers with micropayments in exchange for a better reading experience — but making distributions every 30 days, so people don’t get decision fatigue every time they want to read an article.

Right now, when you go to a publisher’s site on Brave, there are blanks spaces where the ads would normally be. The idea is that Brave will show ads to users based on their browsing history but without sharing that history with advertisers, so advertisers can still target people with relevant ads and users will get relevant ads without their privacy being invaded. Eich sees himself as bringing the user experience back to the center of the web and improving the economics for publishers that have given up too much control over their sites to third parties.

Eich cites TMZ as a poster child for this degraded user experience: “I hate to pick out anybody, but TMZ gets on our slides a lot; they do header bidding and wrappers, which spray JavaScript all over.” Meanwhile, virtually all the ad share gains have gone to Facebook and Google. “They have huge market power, and they’re the only ones benefiting where the publishers are struggling. I would like to see a better system,” Eich says.

Scaling the audience
It all sounds like utopian, Silicon Valley hippie talk. After all, Google and Facebook rely on advertising for most of their revenue — and they’re not exactly going to cede that without a fight. Getting people to switch browsers is devilishly hard. The rule of thumb cited by Peter Thiel is that a new tech needs to be 10 times better, not two times better. Speed and performance are table stakes for a new browser. But getting users en masse to adopt it will be an uphill battle. Chrome owned 56 percent of the browser market share at the end of 2016, while Mozilla’s Firefox bleeds market share.

And browsers have ceased being standalone products and moved to be simply another node that keeps users in platforms’ ecosystems. Google uses Chrome to drive use of Gmail and word-processing software, all in an attempt, of course, to drive searches, where it makes most of its money. To get the word out about Brave, Eich is giving away the Basic Attention Token to users so they can donate to publishers’ sites and has started running, somewhat ironically, search ads on Google.

“Brave is a better internet, with fewer ads,” Gal says. “If you have a big enough audience, the ads will come. The question is, can you distribute enough browsers to create enough of an audience? The power of the default is very, very strong.”

While many agree on what the web’s problems are, not all agree with Eich’s solution. Ben Barokas, a Google vet and co-founder of Sourcepoint, remains skeptical about how attention tokens will compensate publishers, the difficulty of getting people to ditch Chrome for a new browser and if Brave will really be good for publishers, but is sympathetic to the idea of letting users directly compensate publishers. He prefers Sourcepoint’s approach, which is to let publishers unblock ads and give visitors a choice in how they access content. “We’re in this time of pain and suffering from many publishers because of the duopoly and things they can’t control,” he says. “So perhaps there can be this idea for trading attention for content for money.”

Publisher opposition
Brave got off on a bad foot with publishers. After he announced Brave back in January 2016, members of the Newspaper Association of America, now News Media Alliance, representing more than 2,000 outlets including news stalwarts The New York Times, The Washington Post and Dow Jones, accused Brave of effectively stealing their content. “Brave’s proposed business model crosses legal and ethical boundaries, and should be viewed as illegal and deceptive by the courts, consumers and those who value the creation of content,” Alliance CEO David Chavern said at the time. The Interactive Advertising Bureau also tore into Brave.

Sourcepoint shares some of Brave’s values, but Barokas sees it as more pro-publisher while Brave is proposing “a softer form” of blackmail. “Sure, nobody wants ads, but no one wants to pay for content. My way is, give people the choice, versus going in with a bully club and saying, ‘Publishers, I’m going to steal all your ads and only pay you if you give me some money.'”

The newspaper group’s reaction wasn’t what Eich hoped for, but he enjoyed the PR and users it generated for Brave. “I would definitely do some things differently, but that was some of our best growth,” he says. “Users have a thorn in their side from advertising. Some of [the publishers] are in dire straits. But they can’t switch gears because they’re too wedded to vendors. They can’t lose any revenue to ad blockers. Those two statements are in conflict. The FTC is not going to ban ad blocking. What publishers need to do — and we’re not waiting for them — is look at how vendors are taking advantage of them. We’re trying to get the publishers off the Lumascape.”

Brave came along at a time when Eich’s user-first ideas about speed and privacy are gaining momentum elsewhere. Google is working on a new version of Chrome that’ll strip out heavy, intrusive ads that gum up the works. Apple is updating its Safari browser to block autoplay video and end tracking of people’s online browsing. Google and Facebook have launched fast-loading article templates. All these moves don’t give the publisher much choice but to let the platform giants be the arbiter of the rules for advertising that underpin their business models, though. More broadly, Europe is enacting pro-consumer privacy protections in the General Data Protection Regulation, and European and U.S. publishers are banding together in various ways to take back market share from the internet giants.

‘We cut off the hydra head early’
Google’s and Apple’s steps are a recognition that the web has become a mess. Google has a huge advertising business to protect, though, which would seem to limit how much it’s motivated to really change the rules of the web. “Google cannot damage their main revenue source, and that depends on JavaScript,” Eich contends. “Even AMP is not as fast as we are. We cut off the hydra head early and burn the stump, so it doesn’t sprout again.”

It’s hard to look at how entrenched the digital ad ecosystem is, with Google and Facebook accounting for three-fourths of digital ad revenue and nearly all its growth, and imagine things being any different. But people who have worked closely with Eich warn not to count him out.

“The reason he’s well-positioned for the challenge he has now is, he has a good understanding of how the present doesn’t limit the future possibilities,” says Harvey Anderson, who used to be svp of business and legal affairs at Mozilla. “Because if you look at how things are today, you don’t think it can be different.”