The presidential debate between Hillary Clinton and Donald Trump may have been held on the Hofstra University Campus, but there was another battle raging between brands on social media.

A polarizing political race may not be an ideal place for brands to be selling stuff. But many still couldn’t seem to resist getting in on the conversation, despite several executives within and outside the industry warning against it in advance. At the end of the night, there were over 5 million tweets around the hashtag #DebateNight and over a million tweets around the hashtag #DebateNight2016, according to Amobee.

Here are our picks for winners and losers of the first presidential debate, candidates notwithstanding:

Audi
Audi’s new ad “Duel” featuring a male and female hotel valet duking it out to get behind the wheel of the Audi RS 7 aired last night on all channels broadcasting the debate as well as on social media. According to social analytics platform Talkwalker, Audi got significant engagement on YouTube and Facebook, netting over 551,000 YouTube views and 4.1 million Facebook views. The brand also gathered its social team online to respond to people commenting on Twitter and Instagram, with #audiduel getting 428 mentions on Twitter. It’s top tweet got 321 retweets and 567 likes.

Is this the Presidential Debate, or something else entirely? Find out for yourself. #AudiDuel #AudiRS7 pic.twitter.com/GZyGZInu6F

The dictionary confirmed that the word is one of its top lookups this morning.

Barkbox
Furry animals FTW. While talking about cybersecurity, Trump brought up the hack of the Democratic National Committee. When Trump posited that the DNC hack could have been the work of “somebody sitting on their bed who weighs 400 pounds,” Barkbox responded with this tweet, which got it over 4,000 retweets and 6,000 likes.

**BREAKING** We found the 400 pound hacker and he is indeed sitting on a bed #Debates2016 pic.twitter.com/t1ySXASPmw

Trojan
The condom brand couldn’t resist thrusting itself into the conversation. This tweet got nearly 500 likes.

When it comes to protection, there is no debate. #Debates2016 #Debates #debatenight pic.twitter.com/WHX11rV91H

Georgetown Cupcake
The cupcake chain painstakingly put together montages of both Clinton and Trump — using only its desserts. It documented the process on Instagram in a series of posts, with this picture getting over 11,000 likes.

Ford
Donald Trump claimed in his opening remarks that Ford was moving production of their small passenger vehicles to Mexico — which is true. But he also claimed that American workers would be losing their jobs, which isn’t quite accurate. The American worker’s roles will just be shifting to making larger-sized passenger vehicles. Ford was prepared, sending out this tweet in its defense.

Ford has more hourly employees and produces more vehicles in the U.S. than any other automaker. pic.twitter.com/fRXlKecTvQ

The brand was also talked about on Twitter, according to Amobee, with 4,000 tweets mentioning both Ford and Donald Trump.

Patagonia
Patagonia has long stood for sustainability, but went a bit overboard just trying to further its agenda throughout the night on Twitter. While climate change did feature in the debate, it was far from the only thing the candidates talked about. Pantagonia’s incessant — and humorless — tweeting on a single issue felt like overkill.

During the #debates, we must choose to vote purposefully for candidates – up and down the ballot who support strong climate action. pic.twitter.com/Xxu00X2vds

TGI Fridays
Yes, pizzas, wings and beers probably featured prominently at most people’s viewing parties last night. But when the future of the country is at stake, it’s hardly a time to be trying to run a parallel debate online about whether people prefer draft or bottled beers or buffalo wings, meatballs or ribs.

Seamless
We get that business was probably booming last night, but luring people with competing #Imwithher and #Imwithhim discount codes feels forced and overly personal. 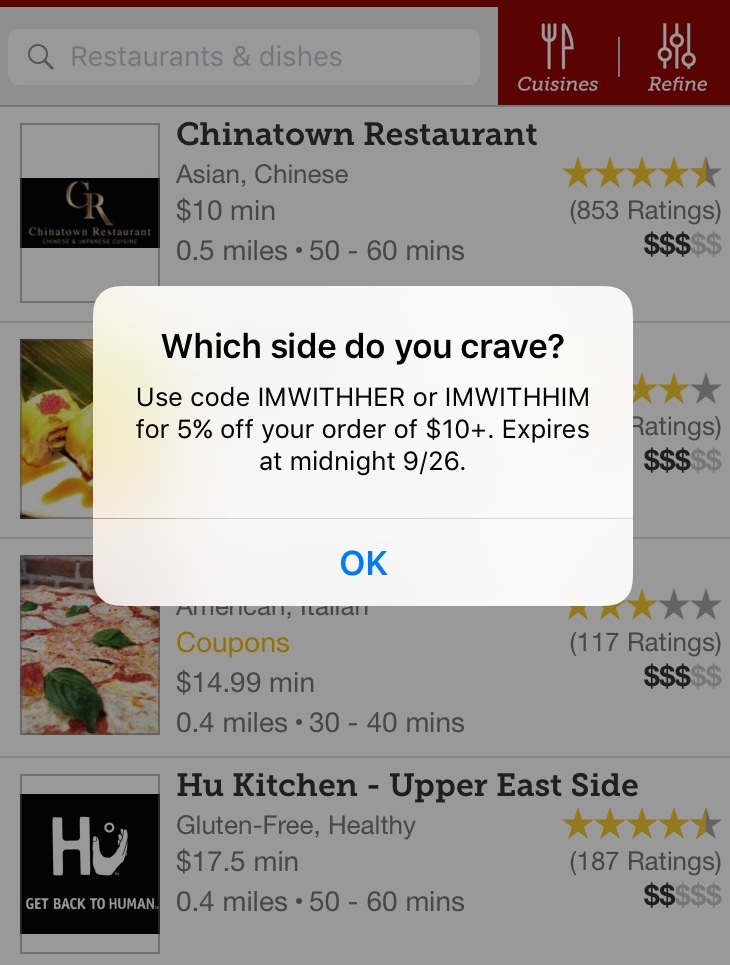 Honda
Honda took clear sides with this tweet, which was perhaps a gaffe by one of its social media managers — and was later recalled.