The best and worst brands on social media in 2014 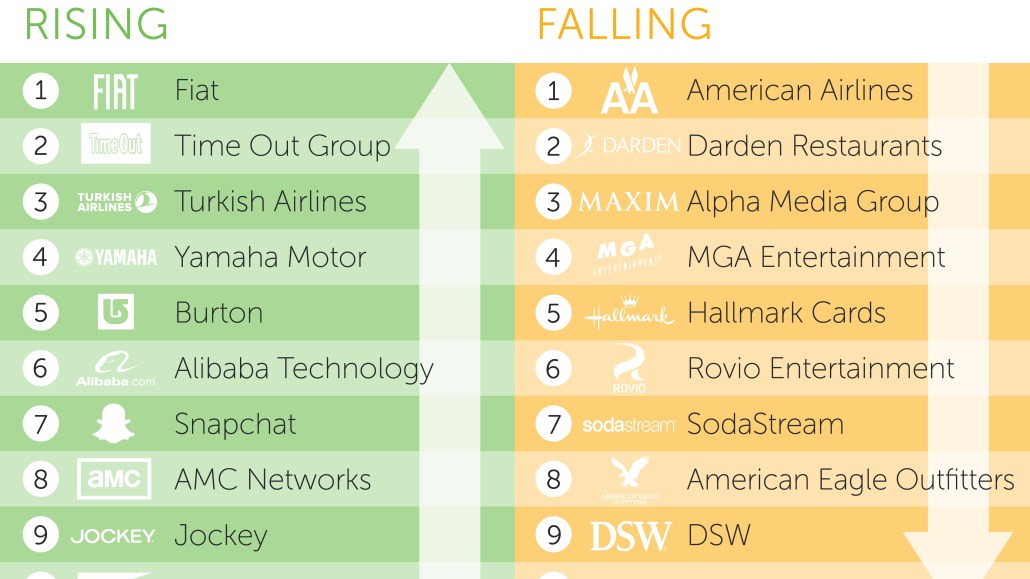 Fiat, Yamaha and Burton had a great year in social media, while American Airlines remained stalled out on the tarmac, according to a new study by Sprinklr, a social media management firm.

Using its social index — an analysis platform that measures social media performances of over 35,000 brands using 11 different metrics on over a dozen social networks — Sprinklr has identified the brands that have both most and least improved their performances on social media in 2014.

“The system automatically collects and analyzes a compilation of metrics including engagement, satisfaction, and passion—letting us look at brands as whole entities and using social media as a mirror of how their perception has changed,” Brian Kotlyar, the vp of demand generation at Sprinkr, told Digiday.

Comparing data from the first three months of the year to the last three months, Sprinklr has identified “boom” brands that have significantly improved their social media metrics. Some of the year’s strongest brands in the space include Snapchat, Fiat, Uniqlo and Jockey. The “bust” brands are those that remained largely unchanged. These include American Airlines, Avon and Hallmark among others.

“Traditional brand analytics are focused on small surveys, but this list tries to capture the notion of change and movement,” Kotlyar said. He added that brands featured in the list weren’t necessarily the ones that had large volumes of followers or interactions, but the ones that demonstrated the most change over the two time periods compared in the year, in terms of improved sentiment among its audience and greater engagement with them among other factors.

Kotlyar also said that the list was fascinating because it reflected the changing market share realities too, citing the expansion of Uniqlo — a Japanese brand — into the American market and AMC further strengthening its brand over the year with the re-emergence of its blockbuster show “The Walking Dead” in popular culture.

“This list is definitely an interesting indicator of brands that we must pay attention to next year,” he said.