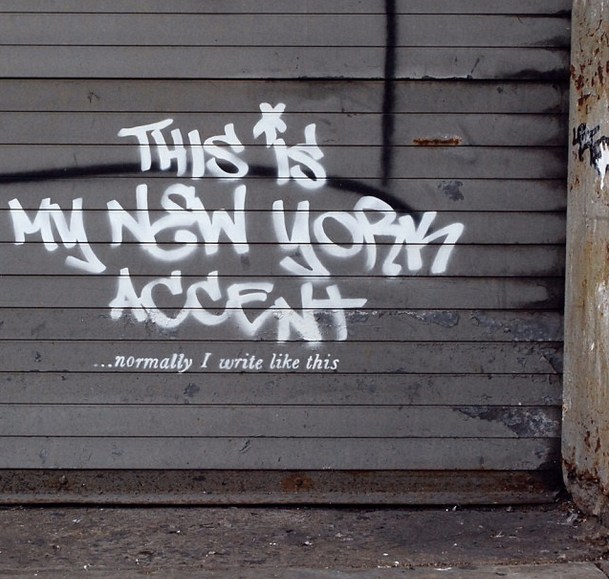 Banksy, everyone’s favorite British street-artist, has taken to the alleys of New York for a month-long show, “Better Out Than In,” which will be documented on a show-specific website and new Instagram account.

The artist also started a new, verified Twitter account (first post 20 hours ago) under the handle @Banksyny. There’s a hashtag (#banksyny) and a cheeky toll-free audio guide to call (1-800-656-4271 #1) so that onlookers can “enhance their enjoyment” of the work.

The art world (or at least the part of it that likes Banksy) has been abuzz since enigmatic messages began surfacing around Los Angeles. His posters bore the message: “Banksy Oct. 2013.” The artist’s own website made it official on Tuesday: “For the next month Banksy will be attempting to host an entire show on the streets of New York,” read the announcement.

The slow reveal played out like a game of tag on various social media channels. Street art photographer Fragile was among the  first to post a picture on his Twitter account, visible only to his followers, of Banky’s piece “The street is in play.”

So far, the playfully elusive (and expertly branded) artist has amassed more than 7,000 followers on his two-day old Instagram account, despite only having posted two pieces of work – and despite the fact that one of his stencils has already been painted over.  A second installment of the show, spotted on West 25th Street between 10th and 11th Avenues, went up this morning.

Digiday reached out to Instagram’s PR team for comment, but has not yet received a response. Maybe they’re too busy chasing down the artwork before it vanishes forever.