For Amazon, this year’s Black Friday-Cyber Monday is all about itself.

The company is using one of the biggest shopping weekends of the year to push sales on its own private label brands — all 130 brands, which run the gamut from apparel to home furnishings. (They also include Amazon devices, like Kindle and the Echo portfolio.)

Last year, Amazon used the holiday period in December to focus on private-label fashion brands, including Lark & Ro, The Lovely Tote and The Fix. It also launched three activewear labels in the same time: Peak Velocity, Rebel Canyon and Goodsport. This year, there’s more activity beyond apparel, with focus extending to home goods brands like Rivet and Stone.

“Amazon’s areas of focus is a precursor to what we can expect in 2019,” said Gartner L2 associate director Oweise Khazi. “Discounting in fashion was table stakes on the platform,” but the additional discounting across the board indicates what areas Amazon wants to disrupt, said Khazi.

Amazon’s push into private label has been one of the more aggressive moves this year. Because Amazon has massive customer data as well as control over everything from how it chooses to advertise others’ products versus its own — plus its innate scale — means its push of private label is a much bigger threat. It also can be tricky: For non-Amazon brands that are selling wholesale to Amazon, they now find themselves in the position of competing against the home team, which is also doing major discounting.

Amazon is the undoubted king of this year’s shopping bonanza. Gordon Haskett analyst Chuck Grom said Sunday evening that nearly 65 percent of shoppers expect to shop at Amazon.com, with 44 percent expected to shop at Walmart and Jet.com.  — Shareen Pathak

This week in DTC
Need another sign that digitally native, direct-to-consumer brands are basically starting to look like every other brand out there? Here’s one: They are beginning to spend media dollars on TV. From Everlane to Allbirds, these Instagram-born brands are appearing during network TV. Now, TV companies are noticing — NBCUniversal’s set up a new offering specifically to court these brands.

Chart of the week
2019 is poised to be a happy year for Amazon and Instagram, according to a survey of media buyers by Digiday. In a November 2018 survey of 469 media buyers from Digiday+’s propriety research panel of media and advertising executives, 79 percent say they plan to increase their spending on Instagram in 2019, and 73 percent expect the same for Amazon. 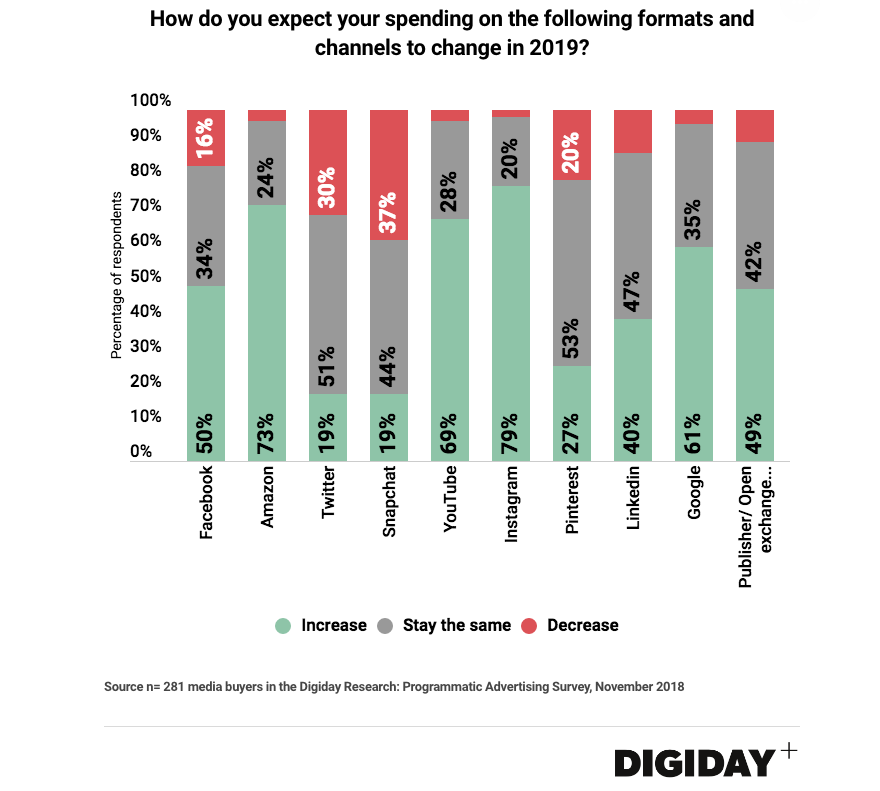 Don’t forget Shopify
It’s not all about Amazon. Shopify, the $17 billion e-commerce platform responsible for operating dozens of direct-to-consumer sites, is becoming more vocal about the role it plays in driving holiday sales to brand dot-coms. Over the weekend’s high-traffic shopping days, Shopify’s more than 600,000 merchants, which are about 75 percent small businesses and direct-to-consumer brands, managed to steal some market share from big third-party retail platforms by offering perks like free shipping and discounts. According to Shopify, it was a record-breaking sales year for the holiday weekend. On Black Friday, Shopify merchants drove $573 million in sales, a figure that surpassed 2017’s total by early afternoon. At its peak, Black Friday sales reached $37 million per hour, and $870,000 per minute. — Hilary Milnes

What we covered
Amazon’s move to New York is an indication of how serious the company may be about its burgeoning ads business — and may lead to a new talent crisis for agencies.

To win over potential young customers, Walmart is getting creative.