Since launching four years ago, The Verge has come to mean more than just consumer tech as it’s extended its coverage to science, movies and music. But the Vox Media vertical has found a ready audience in covering a subject that’s a natural outgrowth of tech — transportation.

Launched just seven months ago, the hub — called, simply, Transportation — now drives as much as 30 percent of the site’s traffic. The section that started with borrowed staff now has its own, four-person team, with plans to add two more by next year.

Having car reviews on The Verge might have turned heads a few years ago, said Chris Ziegler, lead editor and founder of the transportation section. But there’s been so much convergence between technology and transportation since then, with companies like Google and Samsung getting into cars, the specter of the Apple car and the rise of taxi services like Uber and Lyft.

“There’s a lot of pent up demand for this,” Ziegler said. “The intersections between technology and transportation are so natural for us. I would call Transportation an arm or branch of the tech section.”

In typical Verge fashion, the team has tackled cars and car culture, but also broader transportation issues, like Uber and Flywheel and the taxi wars.

“We don’t just want to show pretty pictures of cars. We want to tell the story of where transportation is going,” Ziegler said. 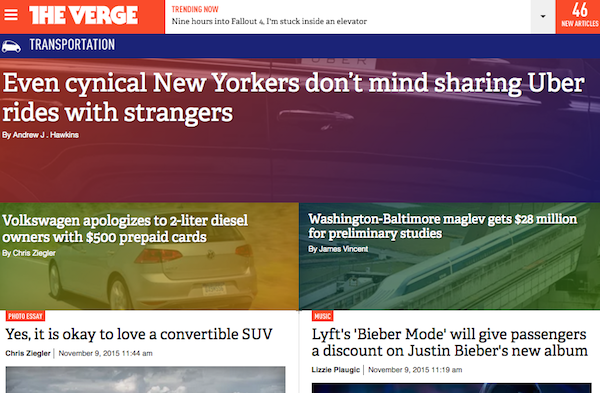 The Verge isn’t alone in seeing the crossover between technology and transportation. Over at Time Inc., new digital-only title The Drive launched this fall, declaring its mission to cover the technology and personalities behind cars. Ars Technica has fired up an automotive vertical. Sibling Wired magazine is prepping the launch of a transportation spinoff next year.

“Historically, the transportation space has been thought of as the auto space, the purview of Road & Track and Car and Driver,” said Alex Davies, who oversees Wired’s transportation coverage. “We’re kind of at an inflection point where the companies involved in this are starting to focus on the fact that transportation is not only the individual car anymore. People want new ways of moving around.”

Fueling this editorial expansion is the ever-present pressure on publishers to build bigger audiences. It helps explain why The Verge expanded its coverage not just to cars but also culture coverage a year ago. The new transportation focus has been good for the Verge’s traffic overall, which rose 28 percent in September versus a year ago, to 21.8 million uniques, according to comScore.

All this may be good for readers, but for ad-supported media, it also means more competition for audiences and ad dollars. For those covering the subject, like their tech counterparts and product-based publications more broadly, they also have to balance the tension between serving readers and advertisers’ interests when the subject of a story is often a potential advertiser. There’s the risk of being too breathless about technology that’s cool-sounding but still unproven. That could be said of this Tesla review by the Verge, Hold on for dear life: driving the incredible, terrifying Tesla Model S P85D, which even Tesla called “glowing.”

It’s good to see a resurgence in the automotive category, which has “been dusty for a long time,” said Lee Baler, vp, group media director at DigitasLBi. “You think about how Vice has moved into the news space. Vice has sports coverage now. It’s extending what they do well. The risk is in doing what Yahoo did in becoming a logo and losing your identity and become less known for one thing.”

Ziegler said he doesn’t think about advertising pressures, “even at all.” But as The Verge looks to expand beyond its existing audience to readers of traditional car publications, it will have to figure out how to balance the interests of both.

“Are we going to review the 2016 Camry? Probably not,” he said. “But there are ways to pick important vehicles that appeal to our audience and others who might be reading Car and Driver and Jalopnik.”

Image courtesy of The Verge.