Three years in, Fusion starts to find its footing

As a millennial news site, Fusion remains a very small fish in a crowded pond.

But the Univision-owned digital publisher, which also has a television channel, appears to be finding its footing. Its audience has more than doubled in a year, to 11.5 million in July, according to comScore. Most of the growth occurred through mobile, which grew 155 percent in the past year, while desktop grew 31 percent.

Adults and millennials in particular are turning to social media and their mobiles to get news. So it’s common for mobile to drive publishers’ audience growth, said Adam Lella, senior analyst of marketing insights at comScore.

Fusion maintains that a majority of its growth is organic, although it declined to give specifics.

Fusion is still dwarfed in audience by other, more established millennial-aimed publishers like BuzzFeed, with 72 million unique visitors; Vice.com, at 33.7 million; and Mic, with 19.1 million. 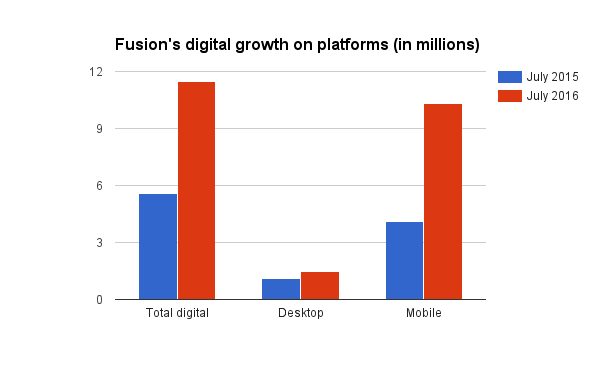 Fusion was primarily a television channel aimed at young Hispanic viewers when it launched in 2013. It then broadened its scope to target all millennials and launched a new website in 2015. But the shifting focus resulted in the publisher making more headlines for its big-name editorial hires rather than its content.

Editor-in-chief Alexis Madrigal said Fusion has sharpened its editorial voice by focusing on race, social issues, justice, identity and the LGBTQ community, with stories like “Kansas grandmother receives racist letter,” and “Sexism at the Rio Olympics.” “We’ve found ways to tell stories about subcultures that respect and understand subcultures,” said Madrigal, formerly of The Atlantic.

Fusion has also aggressively increased its video output, particularly on Facebook. According to Tubular Labs, Fusion had 80.1 million Facebook video views in July, up from 7.7 million in the same month a year ago.

The roughly 10 videos Fusion creates a day range from hourlong documentaries like “Prison Kids,” which has been viewed 314,000 times; to shorter news clips like “Race and the meaning of terror,” one of its most popular videos, with 27 million views. It also finds using its own reporters in videos is popular with its audience.

Videos created for the web often end up on the television channel and vice versa. “We have to think about content that will have a life in many places from Instagram to television,” said vp of digital operations Jigar Mehta. For example, a collection of digital videos called “Sex.Right.Now,” a series exploring topics from sex toys to “weed’s power in the bedroom,” hosted by digital producer Cleo Stiller, was packaged for a half-hour TV show. Fusion also plans to apply the digital-to-TV approach to Univision’s recently acquired The Onion, The Root and Gawker Media.

Fusion may still be tiny, but its multicultural audience gives it a point of difference. “That’s something unique,” said Sarah Baehr, executive vp, managing partner of digital at Horizon Media. But with millennials being difficult to reach, Fusion still has to demonstrate its audience is engaged, she said. “They’ve tapped into that audience, but how it manifests itself remains to be seen.”