It’s no secret that left- and right-leaning news outlets like MSNBC and Fox News cater to their constituencies at opposite ends of the ideological spectrum. But now everything is political.

An analysis by Chartbeat shows that political ideology creeps into other parts of news coverage. Chartbeat took about 5,000 sites on both ends of the political spectrum (it wouldn’t identify which ones). It analyzed how they covered two big cultural events, the Grammys and the Academy Awards, by looking at which keywords were used most by these sites when they wrote stories on these topics.

The study found that Donald Trump was mentioned by conservative sites more than any of the Academy Award winners or other topics, and significantly more than by left-wing sites. Right-leaning publications also mentioned the ACLU, Planned Parenthood, White House and Muslim in their Oscars coverage more often than liberal publishers. Left-leaning sites were more likely to mention “Moonlight” and black actors Mahershala Ali and Viola Davis (see charts below). 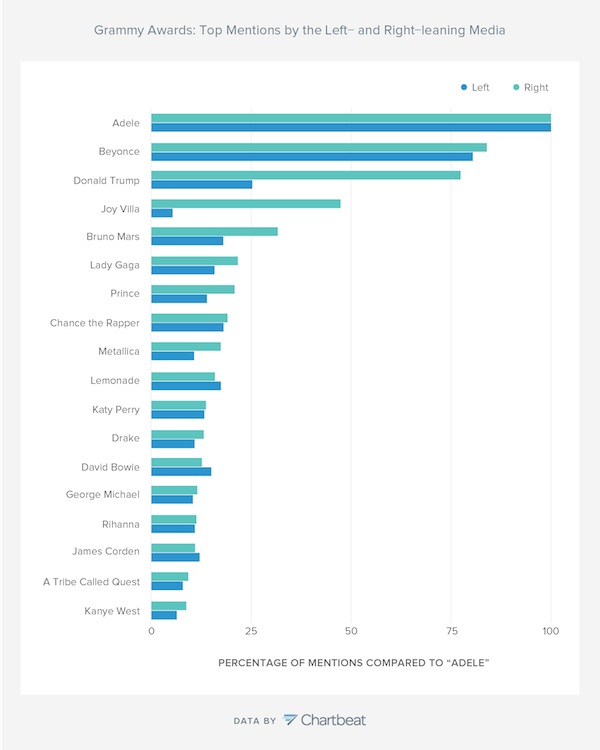 Sonya Song, a media researcher at Chartbeat, said it’s not too surprising that politics shows up in entertainment coverage, given how culture is politicized to start with. But it’s easy to imagine these findings being repeated in other news categories.

“Life could all be about politics,” she said. “It’s not in our data, but all categories have the possibility to be associated with politics.” 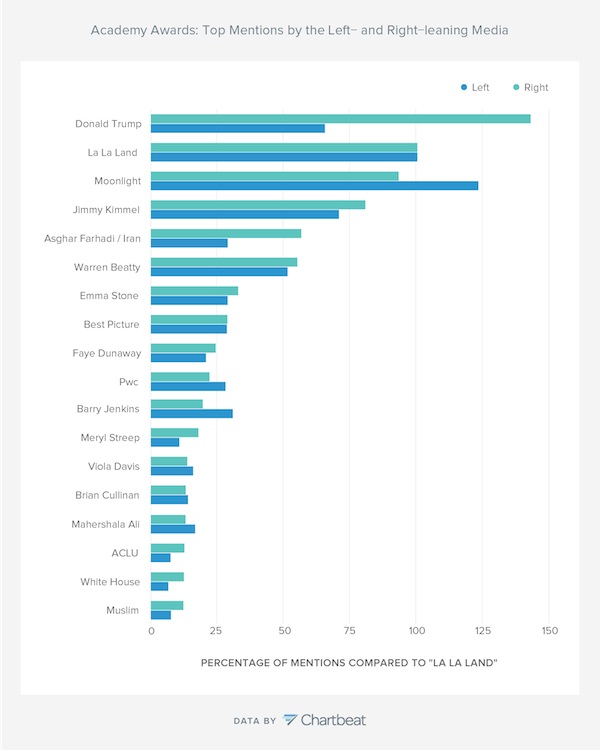 Publishers (largely on the left) have taken steps to counter the filter bubble’s effects and be more transparent. In March, The New York Times launched “Right and Left: Partisan Writing You Shouldn’t Miss,” a collection of viewpoints from across the political spectrum. For the past month, these roundups have been some of highest-performing articles across all the Times’ newsletters, the publisher said. Similarly, Slate has its roundup, “Today in Conservative Media,” which is enjoying growing popularity and could turn into a newsletter if that continues, Slate editor-in-chief Julia Turner said.

BuzzFeed launched an experiment called “Outside Your Bubble” that pulls in comments on its popular articles from around the web, to expose people to a wide variety of views. The Huffington Post has The Flipside, an interactive experiment that collects headlines from 14 publications and shows where they fall on the ideological spectrum.

NPR recently lifted the curtain on the algorithm that determines what news people hear on its audio news app, NPR One. In a post, it described how its formula makes sure people get editorially balanced points of view.

“We really are trying to be the enemies of the filter bubble,” Tamar Charney, the editorial lead for NPR One, NPR’s news app. “There are certain things that aren’t subject to personalization, while with other topics that are less crucial to being an informed citizen, we’ll let people use their interests.”

NPR One is working on ways to serve alternative viewpoints to people and to make sure they see corrected versions of stories. For the first time, it recently was able to email the app’s users an updated version of a story about Neil Gorsuch that contained an error. “We can send an email to everyone saying, this story got corrected,” Charney said. “That’s a powerful new ability.”

But one implication of the Chartbeat data may be that the filter bubble may be bigger than people think. People already are inclined to seek out the news that aligns with their beliefs. A study by the Pew Research Center found that there’s little overlap in the news sites that liberals and conservatives visit.

Search and social media platforms add to the problem by personalizing what users see. The idea that all news can be politically slanted adds credence to the view that there’s little that can be done about it. “It’s hard,” Song said. “People are being polarized as media outlets are polarized.”