The ROI of snacks: How companies track the impact of free food in the office 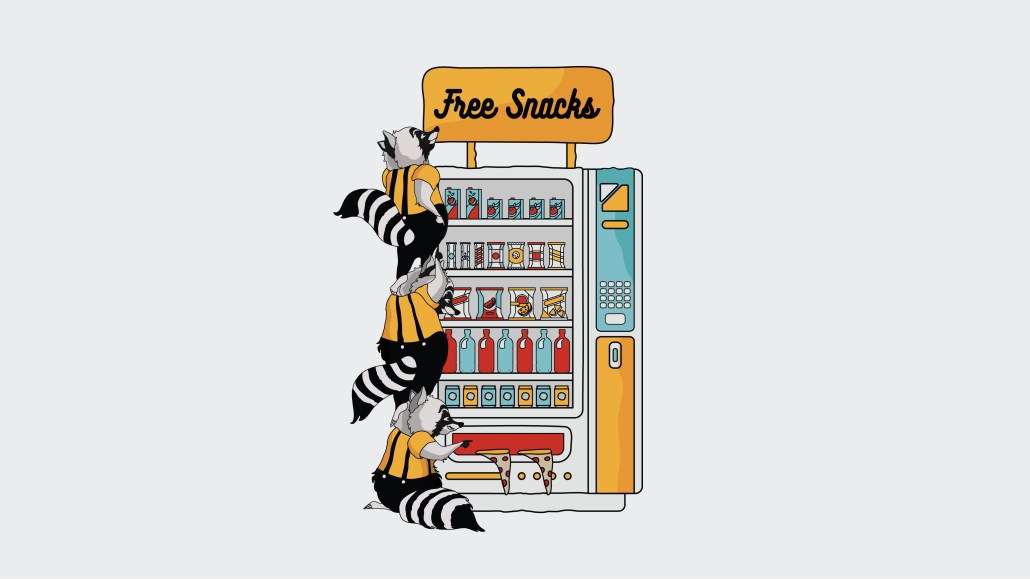 In the fall of 2018, rumors flew among employees of online publisher Mic.com. The avocados in the office were getting progressively “sadder,” the snack shipments were getting smaller and less frequent and the coffee had been switched out for a cheap brand that tasted terrible. That could only mean one thing: layoffs were coming.

“People definitely noticed when the snack supplies were running low,” one former Mic.com staffer said, adding that many people took it as a sign of “impending doom”.

That November the company laid off most of its staff, and announced a sale to Bustle Digital Group.

Free food, snacks and beverages are now a staple at many media and marketing-related companies. Their prevalence has even become something of an economic indicator of the health of the sector: If the flow of chips and fruit-flavored seltzer starts to slow, brace for a downturn.

But for companies picking up the tab for food, drinks and other convenience perks, justifying such expenses has typically been more of an art than a science. Conventional wisdom says catering, massage services and the like might help retain staffers and boost employee engagement and collaboration. But employers have no clear-cut metrics for assessing this.

As companies of all stripes aim to become more data driven and efficient, however, such blind spots are being examined more closely. And with the cost of food, drinks and other perks continuing to grow, so do attempts to quantify their impact.

“The short answer is that it’s very difficult to measure specifics,” says Michael Wesson, a specialist in human resources analytics and a business professor at Auburn University. “It’s just never going to be a company is spending X amount on food and is going to get Y back.”

While it might not be possible to track the impact of something as granular as potato chips, companies are increasingly setting up frameworks to measure how their overall benefits and perks package might influence significant business metrics.

Perks such as free food, drinks and yoga classes are now ingredients in the complicated calculus of many companies in assessing how to aid their efforts to improve recruitment success, bolster employee engagement and happiness — and mitigate employee turnover. Such efforts are often far easier to assign a dollar value to, and improvements to a company’s bottom line are attractive to an employer.

“Some companies are happy to just take a leap of faith” with the perks they offer, “but companies with good HR analytics programs know exactly how much turnover costs them [and] are comfortable investing in ways to limit it as a result,” Wesson says.

As a result, the areas where employers have made the largest investment increases tend to be closely related to employee happiness or associated with health and wellness initiatives. This includes efforts designed to keep employees comfortable in the office and ultimately spending less time outside it due to sickness or a lack of engagement.

According to the Society for Human Resource Management, the percentage of U.S. companies offering free snacks to employees rose from 20% in 2016 to 32% in 2018. Among organizations that increased their benefit spending in 2018, 44% also enhanced their investment in health and wellness-related offerings.

Investing in such programs is hardly inexpensive, though. While the cost of individual perks may seem small on a one-time basis, they do add up over time. For smaller companies such expenses can represent yet another cost to consider if they are wrestling with how to meet payroll expenses each month. And for large, established companies, offering a range of perks to tens of thousands of employees amounts to a significant investment.

Google, for example, now employs nearly 100,000 staffers worldwide and offers the majority of them as much as three free meals a day through its 200 on-site cafes and restaurants. Its main New York City office alone features seven different themed cafes as well as smaller kitchens and snack bars scattered about.

A company spokesperson declined to comment on specific metrics Google tracks related to its catering program or other perks but says the provided food is intended to help drive “big innovative thinking, collaboration, and productivity among employees.”

Some companies now consider offering free food not just a chance to foster positive employee sentiment but almost a requirement. In an economy where competition for talent is fierce, many media, marketing and technology businesses decide they have little choice but to try to compete with the offerings of competitors. That may not translate into offering three catered meals a day. But in major technology and media hubs like New York many companies deem it important to have a story of their own to sell beyond their provision of a salary, health care and perhaps a 401(k).

“For whatever reason, the reality is it’s expected now,” says a founder of a small Manhattan digital marketing agency, which offers employees free snacks at the office in addition to monthly happy hours at a local bar. “We can’t compete with chefs and yoga in the office, but for us it’s about making a gesture,” he adds.

And some media employees admit that company perks are now something they weigh when evaluating potential new roles and employers. As cultural attitudes shift about work, wellness and work-life balance, many individuals now consider convenience perks a meaningful part of their compensation.

“I obviously wouldn’t say it’s a major reason I joined the company, but things like free meals are an attractive part of the overall package,” says one Google ad sales staffer. She does not credit the policy with directly influencing collaboration or business outcomes but says she believes eating with coworkers helps foster closer office relationships.

But companies serving up such perks should be aware that employees start to consider them as part of their compensation, according to Wesson. Once a business begins to offer something, it’s nearly impossible to remove it without employees feeling they are taking a pay cut. The downsides of removing perks almost always outweigh the upsides of introducing them in the first place, he notes.

And Wesson advises employers with a sticky financial situation, “Maybe it’s better to be the company that removed the snacks than to be seen as the company that didn’t do everything it could to avoid laying people off.”