Vinyl music sales have increased by 52 percent year-over-year to $222 million, according to a new midyear report from the Recording Industry Association of America. Vinyl’s continued growth brought in almost $60 million more than ad-supported streaming services during the first half of 2015, according to the report, which underscores the complexity of the state of the music industry.

Ad-supported streaming — which includes services like YouTube, Vevo, and Spotify’s free version — did grow, just not as quickly: A 27 percent year-over-year increase to $163 million.

Other key takeaways from the report: digital downloads of tracks and albums are declining, but streaming is entirely making up the difference. “It’s a transition of one form of digital to these streaming pieces,” said RIAA data analyst Joshua Friedlander. “Consumers are not buying a specific album, but gaining access to a whole library in one form or another.”

There are a surprising number of bright spots for an industry that is half the size it once was: Streaming music revenues — including paid subscriptions to services like Spotify, ad-supported on-demand services and distributions by the performance rights organization SoundExchange — reached all time highs for the first half of the year, breaking the $1 billion mark.

“Overall, the music industry has become the most-digital in terms of all traditional media outlets — magazines, newspapers — in terms of transition,” said Friedlander. “There is more optimism out there than there was. Two-thirds of the market is still physical [CDs]. It used to be monolithic. Now it’s a mix of things, a revenue diversification that makes a more stable source to grow off of.” 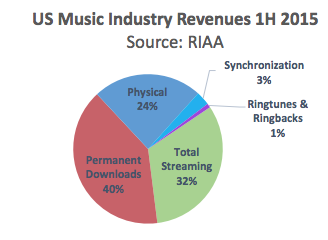 Apple Music, which launched on June 30, was not included in the report, however. And with 11 percent iOs users reporting that they are currently using the service, the RIAA expects paid subscriptions to continue ticking upward in the second half of the year.

“I think it’s going to have a positive impact,” said Friedlander. “These services have mostly grown through word of mouth. There hasn’t been a big Spotify advertising push. When you get a player like Apple involved, that really generates a whole new level of awareness.”