Publishers have been wildly enthusiastic about Snapchat as they try to capitalize on messaging apps’ popularity with young people. But now Kik is catching on with the recent addition of big-name publishers BuzzFeed, The Washington Post and NBC News.

Kik’s pitch is that it’s unlike other messaging services in that users opt in to conversations with brands and publishers, and they can’t push content to people unless the user has initiated a conversation with them (with the exception that publishers may send one general blast a week to their existing user base). Kik claims 200 million users, 70 percent of whom are between the ages of 13 and 25. (ComScore’s figures are far lower, at 16.4 million uniques, of which 42 percent are aged 18-24.)

There are 60 publishers and brands including 16 Handles and Teva using the platform, and Kik says its opt-in nature has led to high user-engagement rates with them. Ten million of its 200 million users have opted in to communicate with those brands, with an average of 9.4 messages sent per conversation.

“Because the user’s opted in, you’re going to see 75 to 80 percent of those messages opened and read,” said Devrin Carlson-Smith, head of strategic development for Kik.

Publishers have embraced the practice of publishing straight to platforms like Facebook and Twitter. But the practice is the subject of some controversy, because the publisher has limited ability to make money off that distribution. With Kik, on the other hand, when a publisher sends a user a story link, the publisher can opt to have users read the article in the Kik ecosystem or on its own mobile site. But either way, the publisher controls the ability to sell ads against its content. Kik gives publishers data like number of users and how many of their messages are read and shared.

The success of publishing on private messaging apps depends on a publisher’s ability to be relevant to the user, though. With that in mind, Kik has gradually been rolling out features that let publishers customize their approach. Last year, it introduced Promoted Chats to make it easier for brands to be found by consumers on the app and keywords to make conversations more relevant.

BuzzFeed and NBC News are both using keywords to drive people to their mobile sites by pushing them links when the user texts topic-based keywords (such as “LOL” or “WTF” in the case of BuzzFeed or “health” or “politics” in the case of NBC News). Kik has fine-tuned its keyword system so that a user who repeatedly types “health” will get a new health-related story each time. It’s also figuring out how to understand natural language, so that users’ requests aren’t limited to just certain keywords.

“It’s about recognizing that you’re going to a one-to-one world,” Carlson-Smith said. “It’s not a one-size-fits-all model.”

Even so, tailoring the content to the platform takes some art. Julian March, svp of editorial and innovation for NBC News, said Kik offers the network a way to reach younger people who don’t watch the nightly news on TV or on the Web. In a few weeks’ time, NBC News has already signed up 50,000 users. 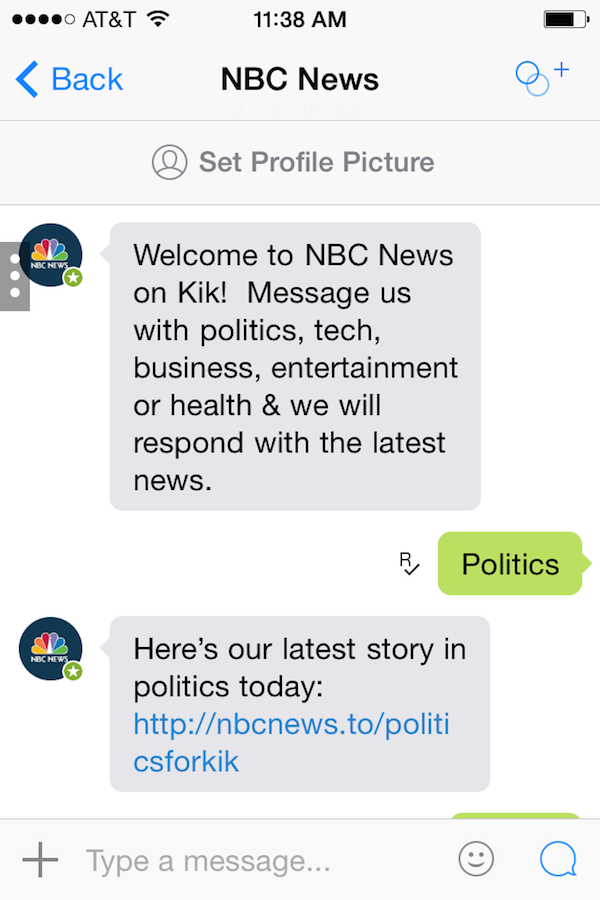 The challenge for NBC News is to push stories to those users that are relevant to that generation without being patronizing, he said. “It challenges us to think about the story choices, because it’s a much younger user,” March said. “They’re interested in politics but through the prism of the issues they’re interested in. What we’re not going to be doing with those messaging services is lots of frippery.”

Some publishers are holding off on pushing users to their sites altogether. The Washington Post so far has used Kik to maximize its one-to-one nature while showing it has a youthful, playful side, with games that test people’s knowledge in subjects like March Madness and “Game of Thrones.” In one game it created, called Kik-tionary, users guess a public figure based on part of the person’s face. 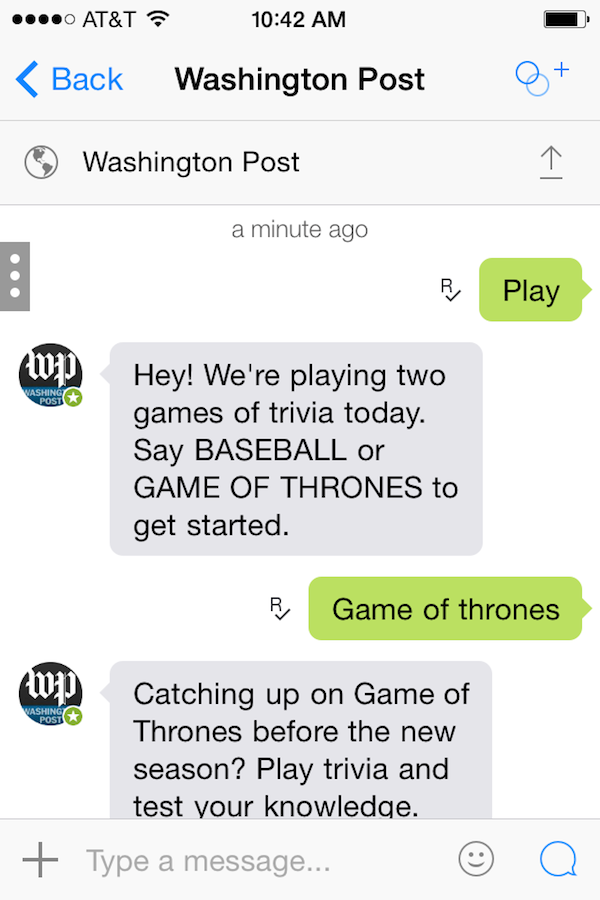 But Kik faces the same challenge as other one-to-one messaging apps, namely, users expect privacy and may feel uncomfortable when a company — be it a consumer brand or publisher — shows up on the platform.

As an early adopter of Kik, NowThis, with 350,000 users on the platform, is well aware of that issue. Athan Stephanopoulos, svp of strategy and partnerships at NowThis, said the key in using Kik or any messenger app is to find content that complements the users’ experience. In NowThis’ case, that meant creating the ability to share its content with other users and pushing out short videos and GIFs that people would be likely to share with their friends.

“It’s bringing these capabilities to the user experience of messaging, where those conversations feel natural, where it doesn’t feel spammy,” Stephanopoulos said.