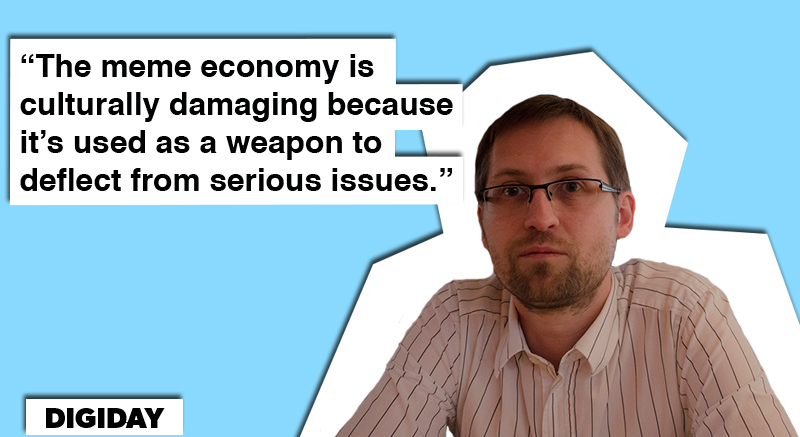 In real life, Rurik Bradbury is a mild-mannered Englishman who bears a startling physical resemblance to Edward Snowden. His low-key disposition couldn’t be any further from his Twitter persona, however.

On Twitter, Bradbury shines as the bloviating beer-guzzling blowhard @ProfJeffJarvis, an account dedicated to parodying “thinkfluencers” like the real-life media pundit Jeff Jarvis. For Bradbury, Jarvis has become symbolic of an entire class of talking (and tweeting) heads who herald technological disruption as an inherently positive change for society.

Bradbury’s Twitter riffs have netted @ProfJeffJarvis nearly 12,000 followers over the past two-and-a-half years, many of them prominent figures in the very technology-media complex the account is skewering.

Last Friday, the man behind the tweets sat down to discuss the impetus behind the Twitter account that has amused and infuriated so many.

A main target of Bradbury’s satire is the Orwellian lengths to which major tech players go to distort language. “Google has historically talked about openness and ‘don’t be evil,’” Bradbury said. “These kinds of mantras are very common in tech. But Google has warped over time. The inevitable pressures of commerce have crept in and chipped away at the edges. Google’s search results have become more and more ad-centric and less end-user-centric. They’ve dramatically reduced the obviousness of what’s an ad and what’s not an ad.”

Bradbury’s semantic umbrage is not limited to big platforms like Facebook or Google. He also takes issue with “meme hustlers” who try to fill the Web with their deep thoughts so they can sell books and charge high consulting fees. He thinks the sharing economy espoused by Uber and Airbnb should actually be called “poor persons as a service.”

Bradbury’s rhetorical war on the tech industry began in March 2012 with the following tweet:

Gutenberg was like the first hacker. Instead of code, he used type. And instead of apps, he made books!

The inspiration for the account was actually a scathing review of journalism professor Jeff Jarvis’s second book “Public Parts,” which appeared in the November 2011 issue of The New Republic. “This is a book that should have stayed a tweet,” tech writer Evgeny Morozov wrote in the review. Bradbury took the advice to heart, firing up a Twitter account in Jarvis’s name.

Initially, the account was meant to directly lampoon the real Jarvis. @ProfJeffJarvis’s first tweet about was an obvious reference to Jarvis’ Kindle Single “Gutenberg the Geek,” in which Jarvis argues Gutenberg was a tech entrepreneur on par with Steve Jobs. The account soon caught the eye of notable journalists such as Bloomberg’s Dave Weigel, the New York Times’ Mike Isaac and Breitbart’s Milo Yiannopoulos.

As @ProfJeffJarvis’ audience widened, so did the feed’s subject matter. Bradbury evolved the account beyond mocking just Jarvis to mocking all new media evangelists and tech journalists who reflexively praise innovation without casting a skeptical eye toward the technology industry.

Not everyone has been in on the joke, though. @ProfJeffJarvis was temporarily blocked from Twitter last fall when he celebrated Twitter’s decision to auto-render photos by tweeting a dick pic. That tweet led to an exchange with an oblivious Dick Costolo, Twitter’s CEO. The handle was reinstated days later.

@ProfJeffJarvis I haven’t been following your trouble. What’s seems to be happening? — dick costolo (@dickc) November 1, 2013

This August, @ProfJeffJarvis made fun of “The Black Swan” author Nassim Taleb in a series of tweets that resulted in Taleb calling @ProfJeffJarvis “a fucking charlatan polluting intellectual life.” (Taleb has since deleted that tweet.)

Jarvis then took to his own blog to compose a rant about the scourge of trolls, calling Bradbury a “tormentor” and “idiot impostor.” Jarvis declined to comment on this story, though his feelings appear not to have softened.

The incident did elucidate an ongoing issue regarding identity and parody on the Web. In an age when Facebook users are incapable of discerning The Onion as satire and media companies routinely cover hoaxes as legitimate news stories, do satirists have a responsibility to label their work as satire?

“Satire is a litmus test for people who are and aren’t smart. Facebook is lowest common denominator, and the idea of a satire tag is horrible and dumb,” Bradbury said.

On a shitty day, the Twitter fight between @ProfJeffJarvis and some wannabe thinkfluencers is my salvation https://t.co/2HZH4j2WPU

Bradbury is certainly qualified to fight this rhetorical battle. He’s conversational in seven languages and has worked in tech his entire career. His first job was as a flack for a public relations firm that repped enterprise tech companies. He’s currently CMO of Trustev, a software company that aims to eliminate e-commerce fraud. Bradbury’s even a successful tech entrepreneur; he had a small stake in email software provider Intermedia when it was acquired by Oak Hill Capital Partners in 2011 for $130 million.

That exit yielded Bradbury enough to live “comfortably,” he said. So comfortably, in fact, that he’s rebuffed offers to write a book.

Bradbury said he plans to honor a request from Jarvis to change the name of the @ProfJeffJarvis handle. But he will not stop parodying tech pundits, however, no matter what they may thinkfluence about him.

“I won’t try and say I’m some kind of crusader,” Bradbury said. “But I do think the meme economy is culturally damaging because it’s used as a weapon to deflect from serious issues.”