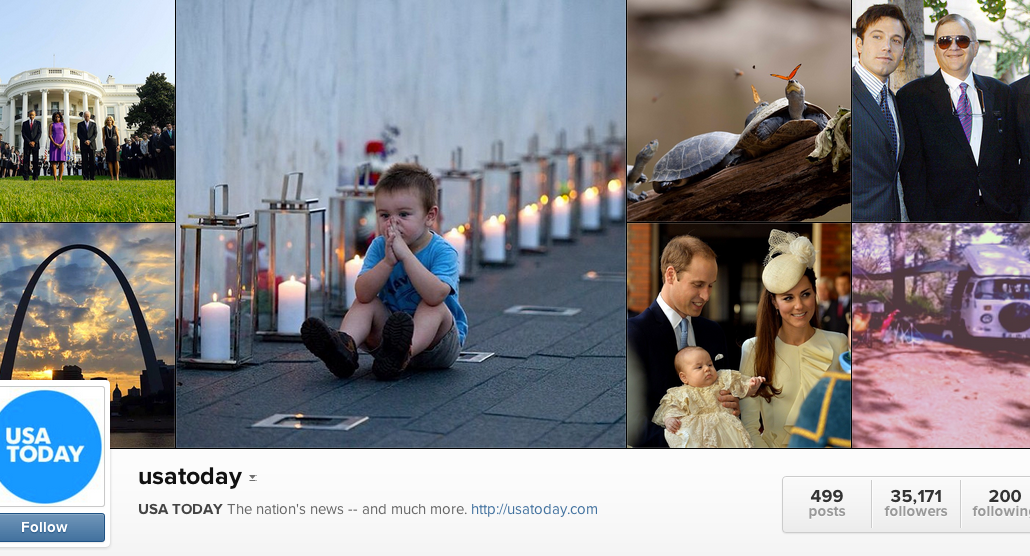 Newspapers haven’t flocked to Instagram the way they have to Facebook and Twitter. Which makes sense. Instagram, unlike the other platforms, can’t drive people back to the site because the photo-sharing platform doesn’t embed live links. Also, they can forget about monetizing.

Still, some papers that do real journalism (and are looking to attract real readers) are on the photo sharing site, if only to have another venue to showcase their occasionally stellar photography – or, at the very least, remind the digital kids that they still exist. Here are five newspapers using Instagram in a variety of ways, and with varying success.

New York Times
You won’t find hard-hitting news from the Times on Instagram. The Gray Lady’s feed is devoted to colorful fashion snaps. The 400,000-plus followers of the NYTimesFashion stream are greeted with the latest in catwalk looks and behind-the-scenes dressing-room shots. This October 15 photo  of a dress from Oscar de la Renta’s fall wedding collection has already garnered more than 5,400 likes and 100-plus comments. The Times is using beautiful photography to capture beautiful people. Some of us normals are OK with that.

Los Angeles Times
The struggling West Coast juggernaut has posted only 92 times to its 1,500 followers. While not having the footprint of its fashion-forward East Coast corollary, it’s learning what works. The paper is posting several times a week on a variety of topics related to the city. For example, here’s an snapshot of an LA Times photographer taking a picture of Ringo Starr. The paper has also experimented with 15-second video clips of talking heads attempting to drive subscribers back to the main LA Times site, albeit awkwardly.

Wall Street Journal
The Journal, exuberant at first, has slowed its Instagramming pace. It has posted only three times in the last two months. The last one, as of this writing, came on October 16 and is a photo of Lucy Lou, a collie that also happens to be the mayor of tiny Rabbit Hash, Ky. The Journal is closing in on 100,000 followers and often taps into the social aspect of the platform. For example, this image of a flower from May sparked a two-way feature: readers sent in pictures of spring using a hashtag and the WSJ was able to create a slideshow on the cheap.

USA Today
The third-largest U.S. newspaper uses Instagram to present its 35,000 followers a wide array of news, ranging from a video of “Modern Family” star Sofia Vergara talking about twerking to an image of National Park Service ranger Richard Trott removing a “This park is closed” sign after the government shutdown ended. USA Today also calls on its followers to submit pictures the newspaper can highlight, like this image of the St. Louis archway submitted by reader Bill Schilling.

East Bay Newspapers (Bristol, RI) and Gazette Newspapers (Long Beach, CA)
National papers aren’t the only rags on Instagram. These two papers may have tiny followings on the platform (88 for East Bay, 121 for Gazette), but that’s not stopping either from highlighting local happenings. For example, East Bay posted a series of fun photos for a local drum corps competition.