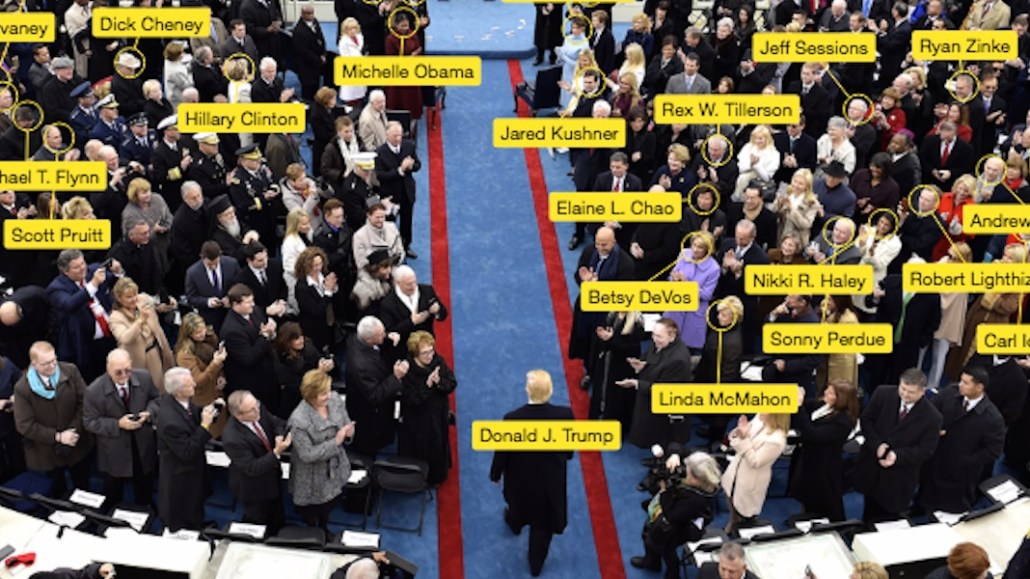 The New York Times’ R&D Lab, started in 2006, grew to a 12-person team that dreamed up products of the future. There was a Minority Report-style “magic mirror” that could serve up information as you’re brushing your teeth. And a conference table that takes notes.

Now, the research unit, recast as Story[X] a year ago, is slimmed down to five people and more focused on the here and now than sci-fi fantasies. Leading the team is Marc Lavallee, who was head of interactive news technology when he was tapped to run the group last September. He reports to Kinsey Wilson, evp of product and technology at the Times. Lavallee and his team of creative technologists — he described them as “misfits” — work as an advance team of sorts for product, editorial and advertising, providing research help.

Lavallee said when he arrived at the Times in 2011, R&D Lab’s mandate was to think three to five years out, but not worry about connecting their work back to the Times’ here and now. The magic mirror is out; the connected home is very much in. The mandate is to be less dreamers about the future and more builders for the present.

“They focused a good bit on building out those artifacts for the future,” he said. “There’s a value to doing that R&D, but what didn’t really happen in practice with any sort of regularity was connecting it back to what the rest of the company was doing. I wanted to flip the model and say, instead of developing this first, then see if there’s an application, start with the need of the newsroom and advertisers and move out from there, instead of the crash landing with something no one was asking for. We don’t want to be a white-paper team making things no one reads.”

The Story[X] team works on the second floor of the Times building near the graphics; interactive news technology; and digital news design desks. Its room is filled with whiteboards, speakers, an Oculus rig and other gadgets. Each quarter, it focuses on a certain area. Last quarter, it was computer vision, now it’s augmented reality and next is the connected home. It’s not dissimilar to the work the Financial Times does at FT Labs or Quartz does with its Bot Studio.

The team has used its computer vision research to speed up the production of this interactive inauguration photo that the newsroom produced. It’s been looking at how it can apply computer vision to news or advertising (by, say, helping the newsroom find the best news photo based on its memorability). It’s also working on demos aimed at showing the newsroom how it might use augmented reality beyond its current applications.

In a sense, the R&D Lab was a product of its time. In 2006, it had more to prove in terms of its tech capabilities. The print and digital sides were much more siloed than they are now, editorial and advertising hardly spoke to each other, and the Times, always highly scrutinized, hadn’t yet proved it could make money from digital subscriptions.

“Ultimately, the legacy of the R&D Lab is the fact that the Times is in such good shape today and is on the forefront of innovation for publishers,” said Sam Mandel, a partner at startup firm Betaworks, in which the Times is an investor. “A lot of things that came out of the lab may not have changed the way they deliver the news, but it’s helped the people who run the Times stay on top of what’s happening in technology.”

The Story[X] team, then, is a natural evolution, in that it’s more tightly integrated with the newsroom, and rather than being the hub of innovation at the Times, complements innovation that’s already happening in different parts of the organization.

“It doesn’t need to be this thing bolted to the side anymore,” Lavallee said.

Story[X] serves three masters — editorial, product and advertising, with priority on editorial. On paper, he admits, it looks like a “challenging mandate” to work across three divisions that have competing interests. Lavallee said he hasn’t run into any conflicts yet. By reporting to Wilson, the unit is set up to ensure it won’t become an adjunct of the advertising department. Coming from a background in news and tech, Lavallee can move fluidly between at least two Times departments. And the internal divisions at the Times have become more porous since 2006, anyway.

“Those parts of the organization are finding ways to all be on the same page about everything,” Lavallee said. “This is one small piece of that. If I do my job right, I make all their jobs easier.”