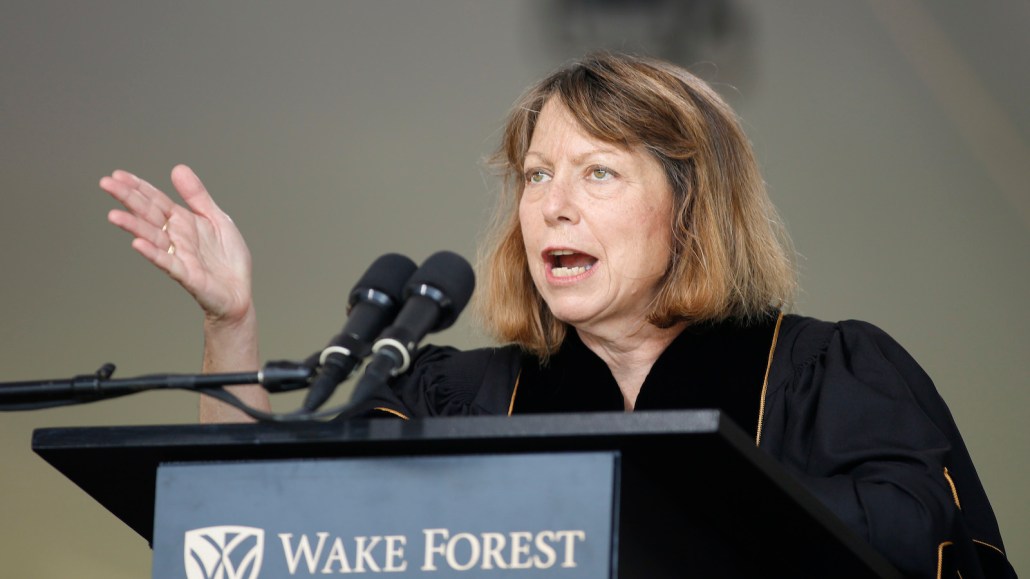 For someone who is no longer in the media, Jill Abramson has been on quite the media tour.

First there was her commencement speech at Wake Forest University in May, a week after her abrupt firing from The New York Times. In her speech, which was heavily covered by the media, she was defiant, talking about resilience and urging graduates to “show what you are made of.” However orchestrated they are (people close to her say she’s been arranging her own interviews without help of a PR firm), her media appearances have let Abramson reclaim the narrative around her high-profile dismissal as the Times’ first female executive editor.

Last week, there was Abramson in an interview in the September issue of Cosmopolitan that went live online. In it, she repeatedly used the word “fired” and talked about experiencing sexism at work. She struck a vulnerable note, too, admitting she cried over a negative article in Politico that was critical of her management style (just the thing the Times gave as a reason for her firing).

There was Abramson again later that week, giving interviews to Pat Kiernan and Rita Cosby’s show on NY1 and, in jeans, talking to Yahoo’s Katie Couric. She made so many appearances that week, sniffed Lloyd Grove of The Daily Beast, “that one could be forgiven for thinking she’s either running for office or selling a product.”

At a gathering by the Common Good, a nonpartisan organization focused on promoting civil dialogue, she spoke out on press freedom, gender bias in newsrooms and, again, getting fired — charming the 60 or so people in attendance. Author and journalist Gail Sheehy, who hosted the event, told Digiday that many of them remarked as they left, “she’s so likable. She’s thoughtful. She’s witty. She’s very clear.”

Earlier in July, Abramson gave a speech and fielded questions at the Chautauqua Institution.

There are a few lessons in PR crisis management to be had here. Putting some space between the firing and granting interviews gave Abramson the chance to get over the shock. Waiting for the initial press coverage to die down also let her own the story.

“I think it gives her the opportunity to put a personal face on her story,” said Joanna Coles, editor of Cosmo. “I think that her story was parsed with extreme attention in the media when it initially happened, but you didn’t hear her voice in it. You didn’t actually have her saying what it meant. So I think she’s now, as they say in PR terms, taking control of the narrative. But she’s also being who she is, and she’s pretty bad-ass herself. By talking to the media and giving her point of view, she’s trying to show her authentic self.”

Abramson appears to some to have chosen her outlets carefully. “Like anyone doing image repair, she chose prominent women journalists who she expected to be friendly, and they were,” said Sheehy. Abramson, for her part, wrote in a text message exchange with her daughter (who later tweeted it), “Reporters I won’t talk to say media blitz of course. No one notices I’m just choosing women I think kick ass to do the interviews.” (Abramson declined to be interviewed for this story.)

Abramson told Couric it was “irksome” to see so much attention on the reason she was fired. But addressing her firing head-on was refreshing compared to the way many fallen public figures dodge the question or hide behind euphemisms.

So while it may be true that only a few people actually care why she was fired, it hasn’t been all bad for her image. Or her prospects: She’s reportedly working on an investigative project, and come the fall, she’ll be teaching narrative nonfiction at Harvard.