How CBS is growing its streaming audience 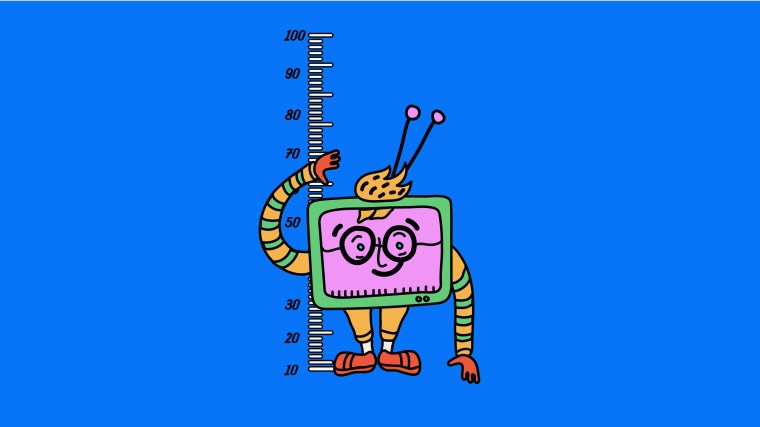 As the coronavirus outbreak grinds on, news is getting a bump. For CBS, this has been a good opportunity to grow the audience on its streaming platform — and keep them even after the crisis ends.

Christy Tanner, evp and gm of CBS News Digital, said that historically, when CBS’s streaming channel, CBSN, has big bumps in views, those spikes end up resulting in higher average audiences even after the reasons for the bump subside. “We know that we’re converting people to streaming news when we have events like this where we draw a large audience,” she said.

Viewership for news is up on all platforms, but in March, CBSN had its best month in its history for streaming views. Last month, streams were up 342% year over year, netting more than 100 million views. April is on pace to remain the second-largest month in stream volume, with only a single-digit dip in views from March. Tanner said she attributes this to a shift from daily breaking news on state closures and shelter-in-place mandates, which led to several spikes in views in the first couple weeks of March, to more presidential and gubernatorial press briefings.

In the latest edition of the Digiday+ Talks, a series open to members of Digiday+, Tanner talked about how the news network has worked to fill the funnel of viewers on the streaming platform while also capitalizing on the audience it is bringing in.

Digiday+ members can access full video of the Talk and Christy Tanner’s slides below.

How to market a streaming service during a pandemic

The bulk of CBS’ viewers come to the network through connected TV and connected TV platforms according to Tanner. But her team has been pushing its streaming platform on both mobile and desktop in various ways during the crisis to increase viewerships on those channels as well. This has helped result in the 342% year over year increase in unique streams in March.

The advantage of streaming news is that despite local TV stations having their own streaming channels, viewers are consuming content from outside of their local regions. This has helped to shape a bit how news is told, but it has also helped to fill the funnel of viewers.

News is a safe space for digital advertising

Prior to the virus, Tanner said that there was a trend of advertisers “shying away” from the news because they thought it was too hot or controversial for their brands. Now, while CBSN experienced some advertisers initially putting their campaigns on hold during the onset of the pandemic, they are now starting to turn those campaigns back on. “Trusted news brands are a safe environment for brand advertising,” she said. 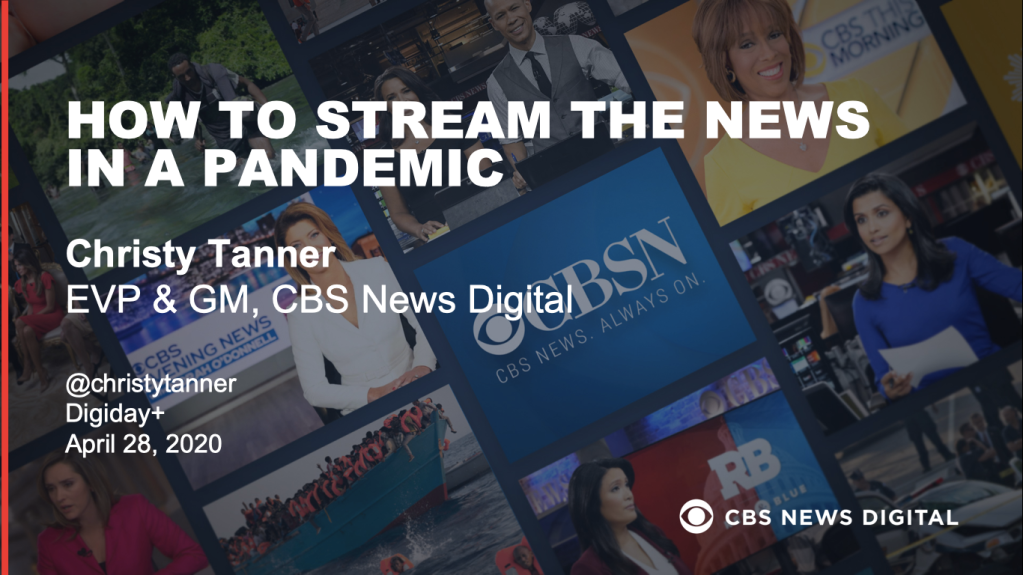 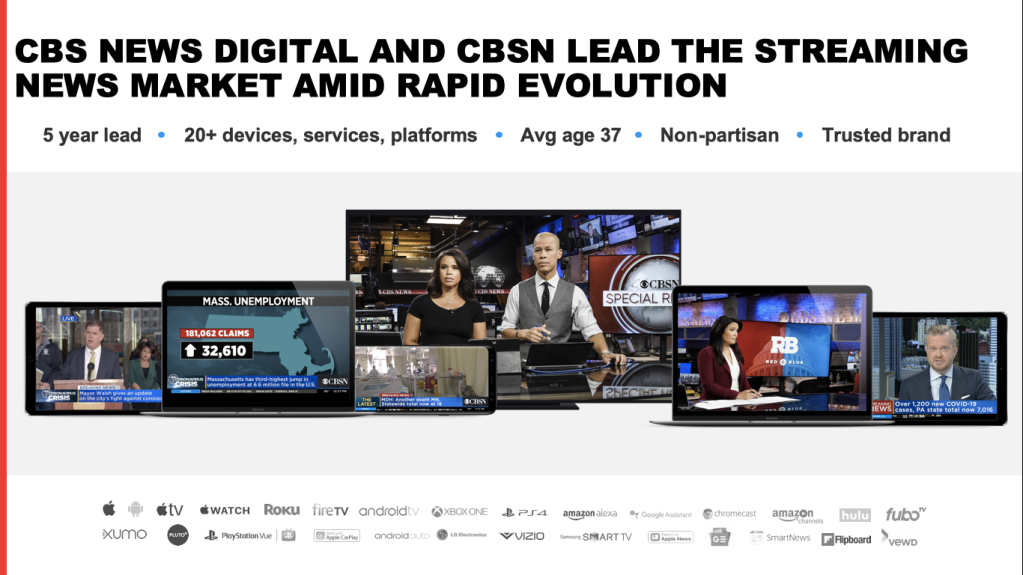 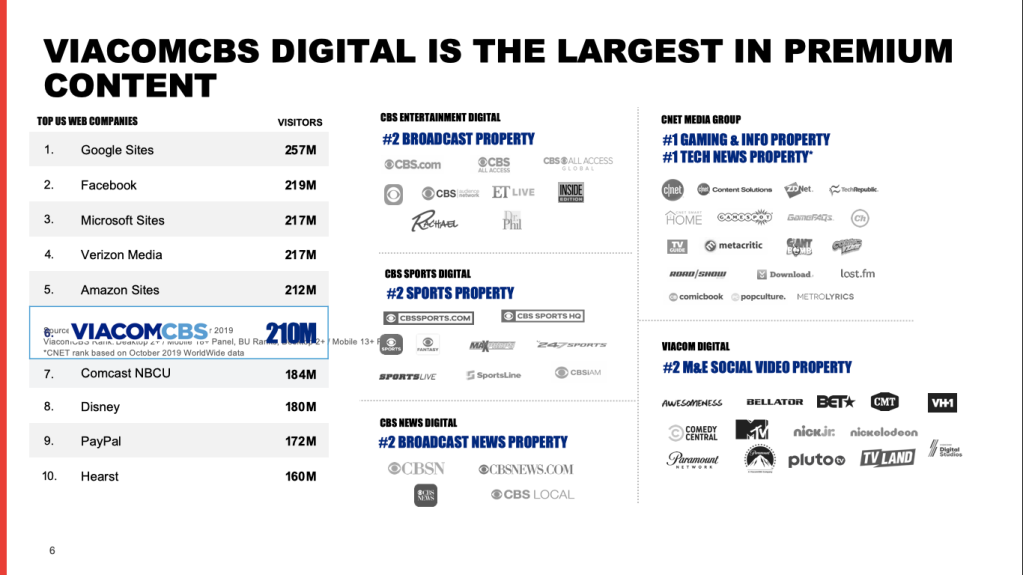 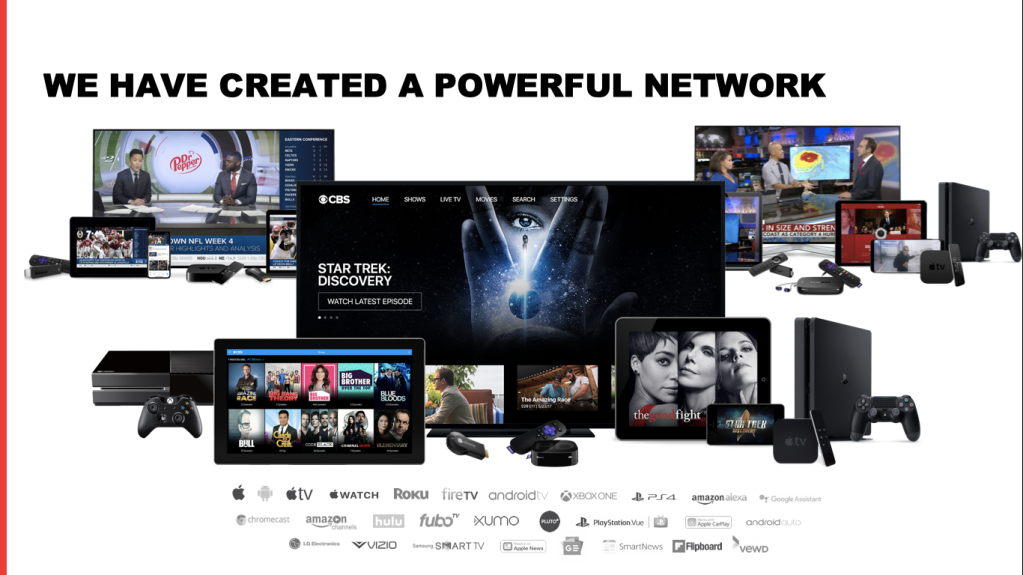 Image description –
The platforms that CBSN currently lives on. 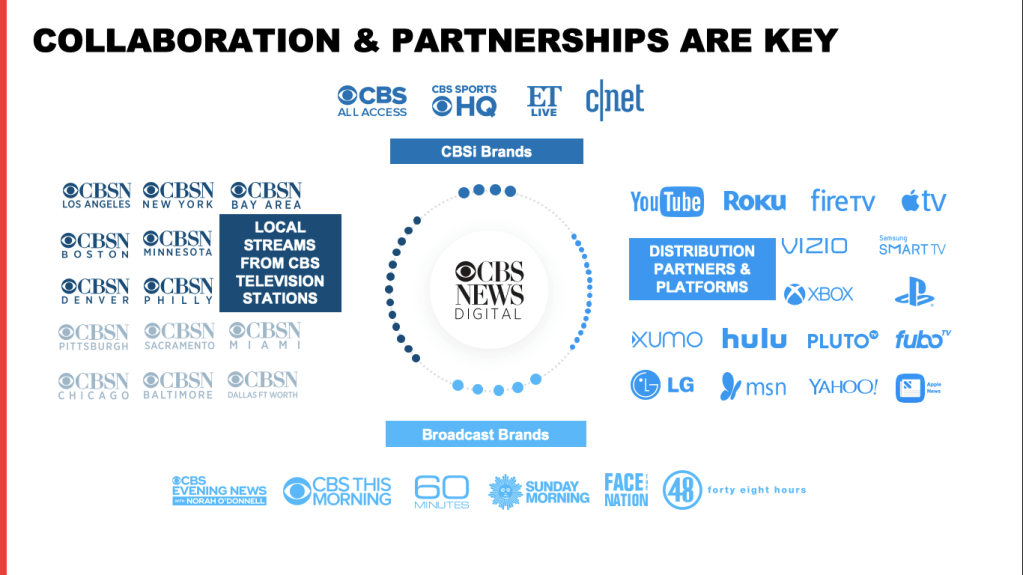 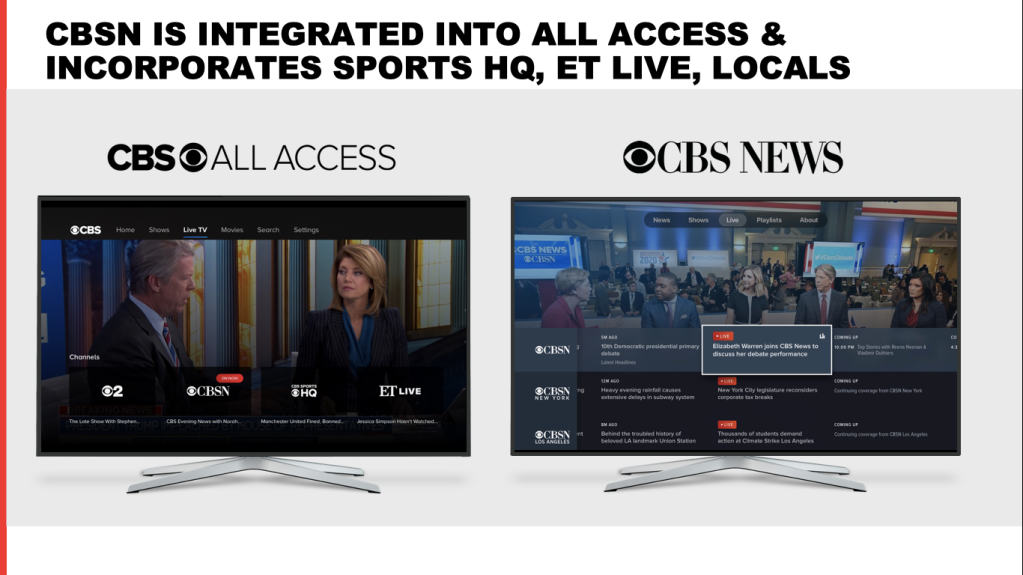 Image description –
The company's various verticals are encompassed under CBSN. 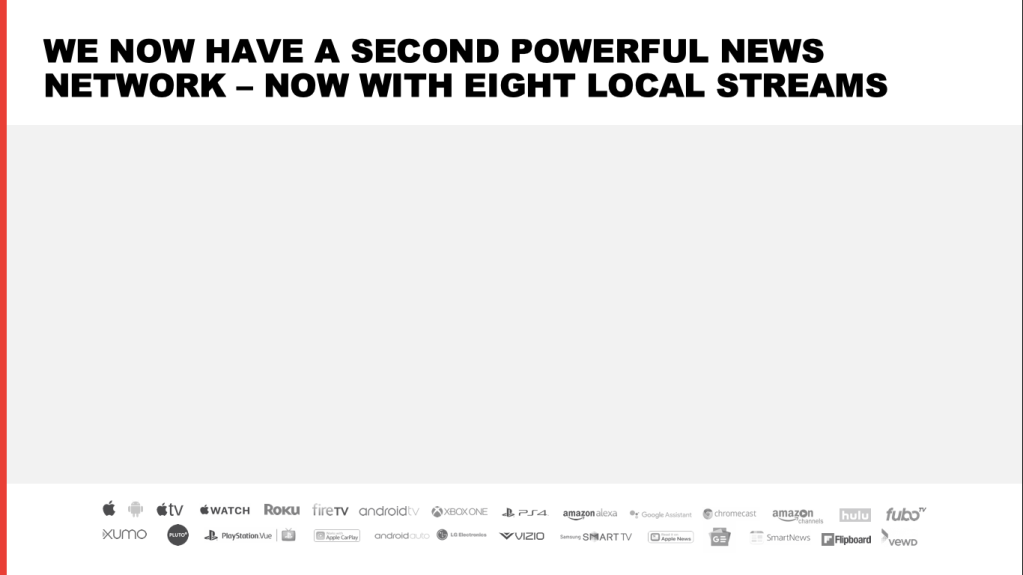 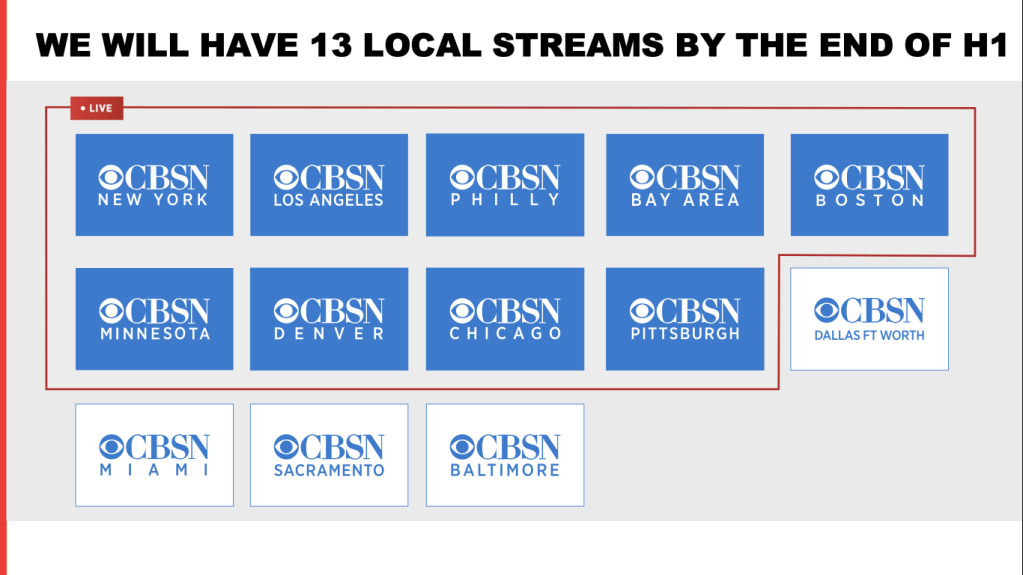 Image description –
There will be 13 total local streams by the second half of the year. 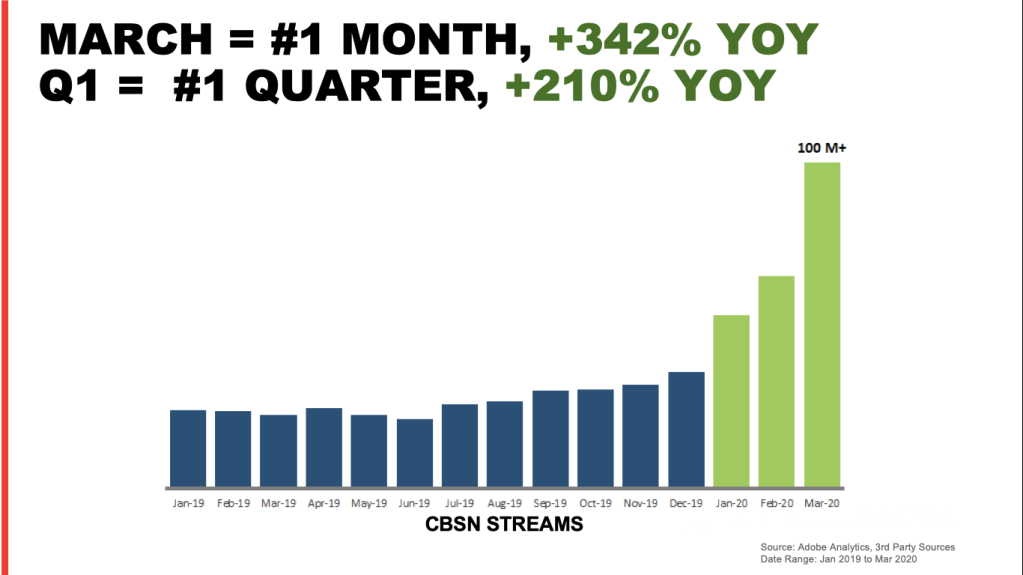 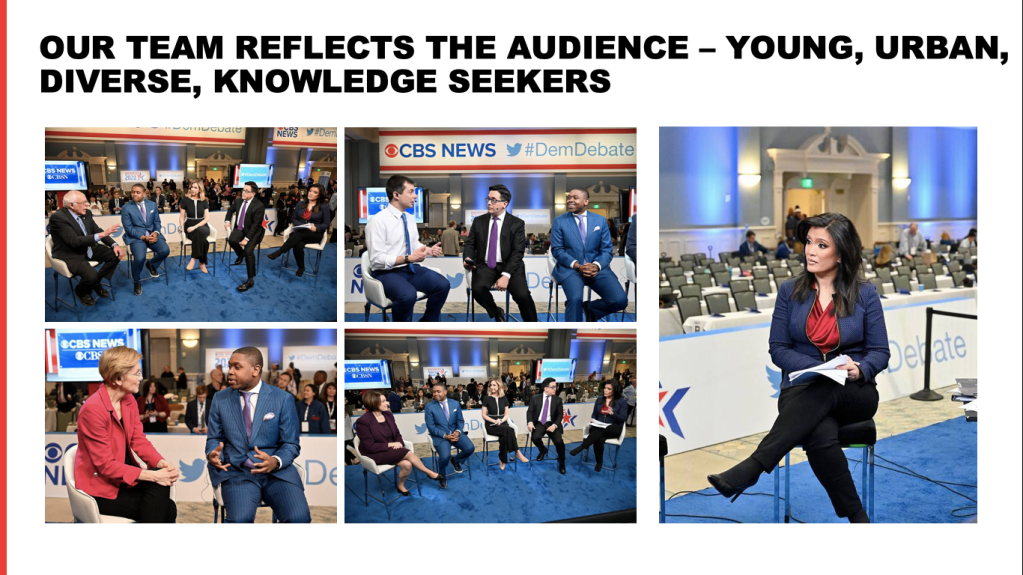 Image description –
Diversity is not only important, but helps to bring in viewers of all backgrounds. 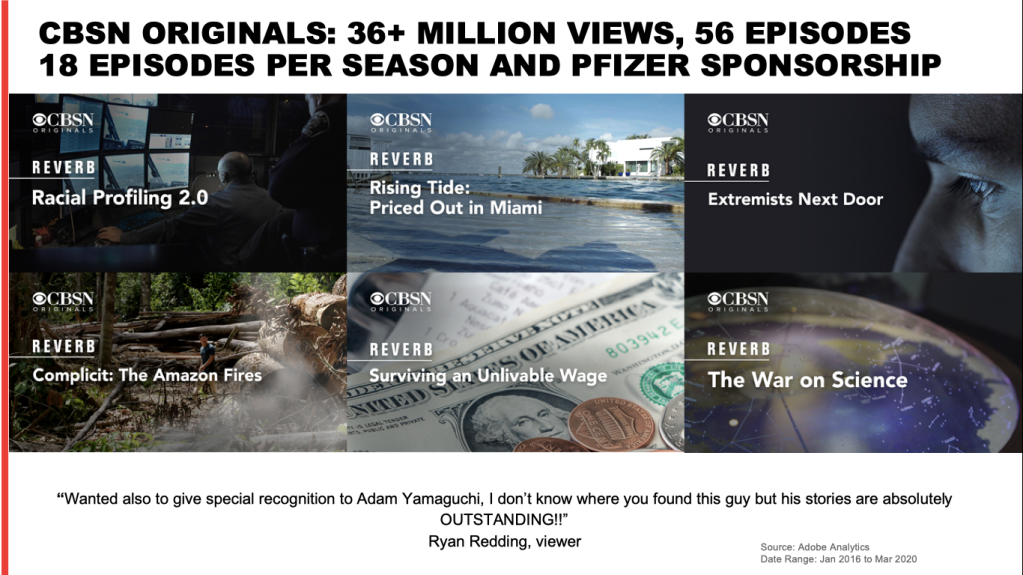