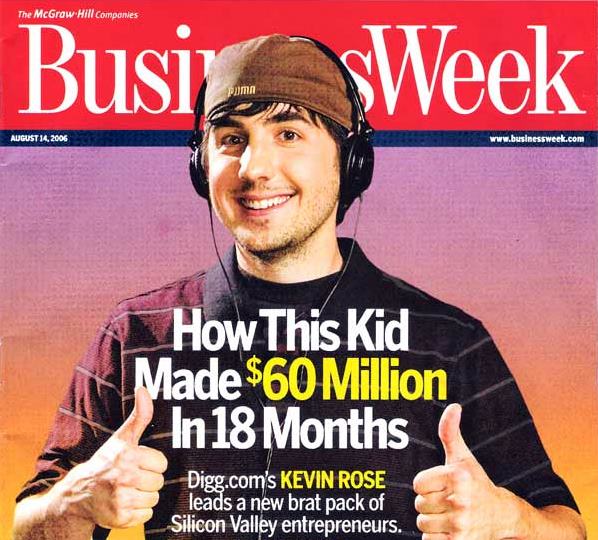 It is easy to feel a bit of schadenfreude when it comes to the messy end to Digg, which was acquired for just $500,000 after taking $45 million in venture capital. The Silicon Valley high-flyer was pretty much the epitome of the Web 2.0 bubble. It was overhyped from the start and subsequently made several bad decisions that alienated its users. But who could forget the BusinessWeek cover shot of a grinning Kevin Rose that described him as a leader of a “new brat pack” in Silicon Valley, along with the bizarre claim he “made $60 million in 18 months”?

And yet Digg was an innovator in one important way: It showed the way with an innovative ad system that was truly native to the experience. For all of Digg’s mistakes, it got the ad part mostly correct. Rather than splash the site with IAB units, Digg chose to make its own ads in 2009, determining that the ads themselves should be promoted content from the site. Advertisers were challenged to adapt to Digg’s community, contributing content that they could then pay to have surfaced more prominently. Users could comment on advertiser posts, promote them and bury them. The more an advertisement was Dugg, the less the advertiser had to pay, rewarding those with good content.

Sound familiar? It’s pretty much the blueprint Twitter is following now, along with Tumblr. Social platforms three years on are still struggling with how to adopt advertising. Tumblr appears to be agonizing about how to introduce ads and not lose its indie cred. Facebook’s Beacon foray was a disaster. Its most promising ad format is Sponsored Stories, which are like some Digg Ads in which brands would promote stories others had Dugg.

Digg held fast to the notion that advertisers needed to be part of its community and contribute just like regular people. This is pretty standard fare now, but was rather new when Digg rolled out its ad platform three years ago. It was so new that Digg had a team that helped craft Digg-worthy copy for advertisers, a nod toward publishing services that places like The Huffington Post and Gawker now offer.

None of this was enough. The exact reasons for Digg’s decline are hotly debated. In 2008, Google was rumored to offer Digg $200 million. By 2009, when it rolled out the ad system, Digg had already begun to lose its mojo, eclipsed by the social juggernauts Facebook and then Twitter. Soon it saw a defection of users to rival Reddit, which it bears mentioned runs a somewhat similar, less sophisticated version of Digg’s ad system.

I asked Chas Edwards, the former Digg chief revenue officer who now holds the same role at Luminate, for his thoughts on what Digg accomplished.

Often entrepreneurs come up with a great idea but their timing is off, or have the kernel of a great idea but aren’t successful at delivering the idea to an audience. Kevin and the early crew at Digg invented the socially-curated news. In recent years Twitter and others took the practice to the next level, but Digg still deserves thanks and a spot in the history books for its seminal role in remaking our concept of news. Digg pioneered native advertising for social news environments — those Digg-able sponsored stories on the homepage that enabled the community to vote up ads they liked, and “bury” into oblivion the ones they didn’t. As I follow the launches of Tumblr’s Sponsored Posts, Twitter’s Promoted Tweets, Facebook’s Sponsored Stories and others, I think Digg deserves some of the credit for moving online adverting a positive, beyond-the-banner direction.

Little of what was Digg appears like it will live on. Betaworks, the company’s acquirer, plans to fold its tech into News.me, its personalized news service. Don’t be surprised if News.me takes some cues from how Digg went its own way on ads.