BuzzFeed, OMD, Fullscreen among the winners at Digiday Video Awards 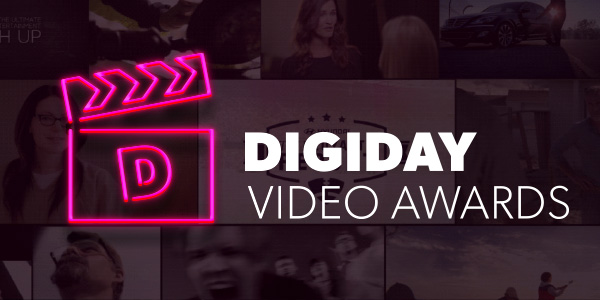 It was equal parts business and pleasure at the Digiday Video Awards this evening, where BuzzFeed, OMD and Fullscreen were among the winners across 17 competitive categories.

Finalists convened at the Highline Ballroom in the Manhattan’s Meatpacking District for drinks, dinner and conversation before the competition got underway. Mitch Lewis of YouTube channel sensation “The Kloons” hosted the proceedings.

“We’re here tonight to honor the excellence and breakout achievements made in video media, marketing and advertising,” he told the crowd of industry elite. “That corporate jargon basically breaks down to: When it comes to selling bullshit to the masses, nobody does it better than us!”

Media agency OMD had the first win of night for Best Use of Video for Entertainment for its work for Pepsi, “Max Test Drive 2.0.”

Hot on the heels of a successful 2014, The New York Times’ T Brand Studio added a new win to its raft of awards, this time for Best Brand Video Destination for its paid post documenting life in women’s prisons for client Netflix.

Lexus and its agency of record Team One drove off into the sunset with Best In-Banner Video Ad. (They returned for the cocktails later.)

INNOCEAN USA won best Social Video Advertising for its work for client Hyundai Motor America “0 to 60 in Less Than A Vine.”

Fullscreen’s efforts to get viewers to spend more time with GE’s video content resulted in a resounding win, allowing the team to bring home Best Brand Use of Video for Information.

Complex Media Inc., the multimedia platform for 20-something men to learn about and buy products like sneakers and art that interest them, won Best Video Destination – Entertainment for Complex TV.

The Finnish video game developer Rovio, famous for creating the joy and frustration that is Angry Birds, won Best Video Distribution/Syndication Platform for ToonsTV. The platform aggregates original scripted content spinning off of the Angry Birds franchise, plus other family entertainment.

Digiday staff writer Eric Blattberg, covering the video beat for Digiday, presented the penultimate award for Best In-Stream Video Ad to the teams from Microsoft, Mixpo and Team One for their work on the Lexus F Series.

The evening ended with BuzzFeed doing what it does best: cat videos. Mitch Lewis presented the BuzzFeed team with the award for Best Video Creative for “Dear Kitten,” its series of videos for Purina Nestlé that feature an older cat showing his protégé the ropes when he arrives in a new home.

Digiday CEO Nick Friese closed out the evening, thanking the winners, judges, the Digiday team and Mr. Lewis. “The bar is open, and the band is coming back out. It’s time to celebrate.” After a few more rounds thrown back to the sound of Digiday house band 45 Riots, the attendees dispersed into the Chelsea night.