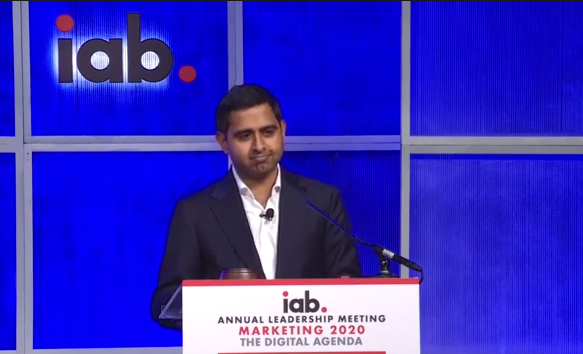 The digital media industry is gearing up to tackle the advertising fraud problem that’s helped fuel much of its growth in recent years.

Speaking yesterday at the Interactive Advertising Bureau’s Annual Leadership Meeting in Palm Springs, Calif., the trade body’s newly appointed chairman, Ziff Davis CEO Vivek Shah, called on the industry to recognize the problem and clean up its act. The industry will never realize its potential if it doesn’t take the matter seriously and fix it now, he said. Shah cast the net of blame widely, implicating not just unscrupulous actors but also publishers and agencies.

According to Shah, a full 36 percent of all Web traffic is non-human traffic. Other ad execs suggest that number is closer to 50 percent. “There’s nothing more damaging to our industry than fraudulent traffic,” he said.

That might be true long-term, but the way things stand now virtually every member of the ad ecosystem benefits from the existence of fake traffic. Publishers and ad tech middlemen get paid for the impressions they have a hand in serving regardless of whether they’re being served to real users or not. Eradicating 30 – 50 percent of those impressions would have a huge impact on those businesses.

Agencies also have little reason to stamp it out. The ad impressions they’re buying might not be real, but they look real on paper, and that’s usually enough to convince clients and enable them to pick up their compensation regardless.

Shah alluded to this during his keynote, too, suggesting agencies need to step up and take responsibility for the quality of the media they’re buying, instead of turning a blind eye or passing the buck to the sell-side.

It’s also worth noting that the IAB itself derives its revenues from member companies that, knowingly or otherwise, benefit from fraudulent traffic.

None of Shah’s points will come as news to IAB meeting attendees. The quality issues have been digital media’s dirty little secret for years. What is new is the fact that the problem is now well and truly out in the open, and clients are asking more questions than ever about what it is they’re actually buying.

The online ad industry has a difficult decision to make: Follow Shah’s advice and put an end to the problem, or risk undermining the medium entirely and kiss goodbye to the big-brand dollars it so desperately believes it deserves.