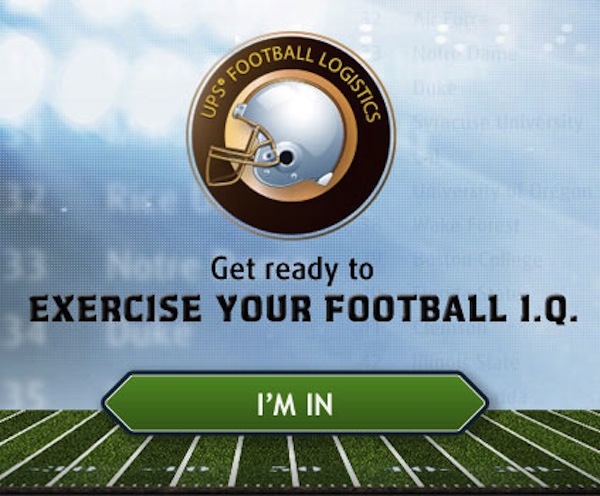 Marketers love TV. It has great reach, accepted measurement and the kind of sight, sound and motion that’s integral to building brands. What it doesn’t have much of is interactivity. That’s starting to change.

The question is what’s going to serve as that bridge. URLs quickly became common at the end of TV spots, followed by calls to “Google Pontiac” or “like us on Facebook.” Now it seems like Twitter hashtags are all the rage. And companies like Shazam, which identifies songs for people, are betting that smartphones will serve as that bridge.

UPS wants to find out if the phone is the bridge. Its new “That’s Logistics” television spot asks viewers to dial **UPS to join the conversation online. When they do, they receive a text message with a link to UPS’ new Facebook app.

“We worked to draw a link from TV to your mobile device,” said Eric Wegerbauer, group creative director at Ogilvy. “You just pick up the phone and dial the number to get a text message with a link. It’s a quick jump from offline to online.”

The campaign is pushing the connection between sports and logistics, emphasizing how both involve strategy, team work, performance and delivery. It uses one of college football’s most famous plays – the 1984 “Hail Flutie” pass by Doug Flutie in the final second of a game between Boston College and Miami that saw Boston College win the game. The spot shows how, when broken down movement by movement, one can see that it was successful because of strategy and planning and because each player on the field executed his role to perfection.

To support the television spot, UPS is also launching a companion Facebook and mobile experience, supported by social media and online video ads. A key element is the UPS Team Performance Index specifically created for the 2012 College Football Season. The UPS Team Performance Index is a ranking that highlights teams that are prolific competitors across every aspect of football. The index, updated weekly, measures a team’s competitive advantage based on strategy, teamwork and precision.

The campaign and Facebook app also invite college football fans to take part in weekly trivia games and watch videos of athletes discussing logistics in their sports. There’s a mobile app to the same offerings.

Ogilvy plans to track basic engagement figures, but also time spent and repeat interactions, which would point to some amount of loyalty. So far, it has found the Facebook app, for instance, is keeping users for 3.5 minutes.

“That says a lot because it doesn’t take that long to complete the quiz [in the app], so it means that people are moving on and digesting other content like videos and the index,” said Eric Andrade, account director at Ogilvy.