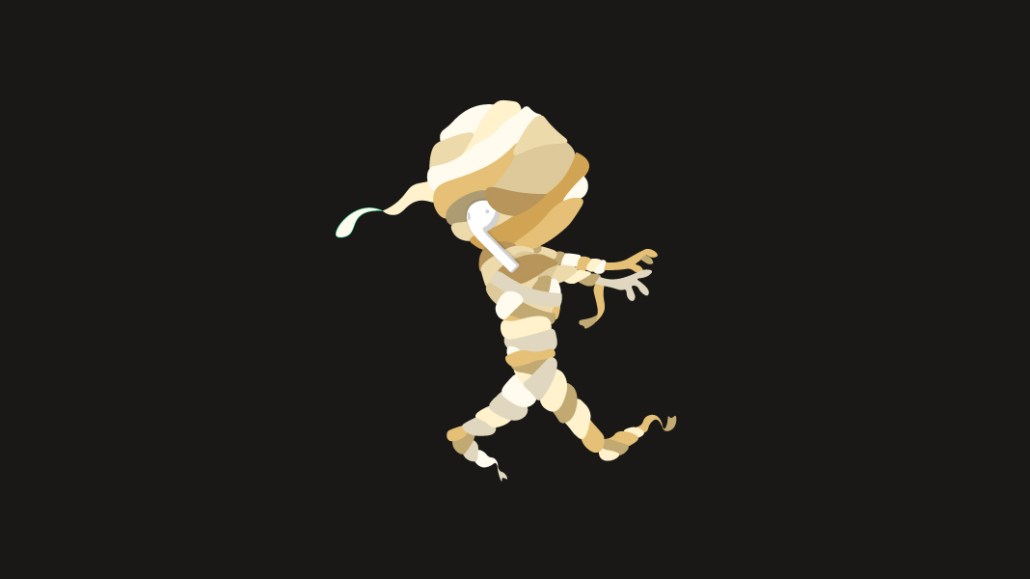 Headphones are a fact of life inside open plan offices, but Airpods have quickly become a staple of life at ad agency life, with staffers walking around all day with the signature little pods in their ears. For those who remember when people used phones to make voice calls, this is a somewhat disconcerting development in a business that theoretically thrives on collaboration.

“I know they’re not listening to music, or anything, but it’s still disconcerting to see them with something in their ears while we’re all discussing something,” said one agency CEO, who said he once had a meeting with someone wearing Airpods. “It’s like, ‘what?’”

Airpods have invaded regular life — the first episode of the new season of “Big Little Lies” features a poignantly funny Airpods scene — causing a reassessment of what’s rude and how to simply navigate daily life when a significant number of people have implants in their ears. Inside offices, it’s caused a few issues: For some, it’s a generational tug of war. For younger employees, it may be no big deal to have Airpods in their ears at all times. But for people, headphones are the universal sign of “Do Not Disturb,” so it’s a complete rewriting of accepted office rules if someone’s wearing them all day.

One 24-year-old agency employee told Digiday he “never takes them off” because he’s afraid to lose them. Some cite the restroom as the no-go zone. Others say anywhere is fair game, as long as they’re not actually being used. Ted Nelson, CEO at Mechanica, calls it the “Airpods barrier” that is “impeding cultures and work environments that require creativity and collaboration.”

For Nelson, the issue is that people need to reimagine how work is to be done in this kind of environment — but instead, Airpods and other systems are simple “workarounds and hacks.” “The human factor is an invaluable first and last-mile contribution to the best breakthrough ideas,” he said.

“Airpods are a totally different phenomenon,” said Michelle Edelman, Petermayer evp and chief strategy officer. “The product is honestly good, but wearing them 24/7 is going to mess with the notion of when you can and can’t disturb someone. So it’ll change social norms if people just start to leave them in during meetings.”

It’s also led in some ways to the blurring of work and life. Stephanie Weisman, who runs business development at Y Media Labs, calls it the “work-anywhere culture.”

“Just yesterday, I was walking on the street listening to a partner review some important data with me and a woman stopped me to ask for directions as she didn’t see my Airpods,” she said. “I had to do that thing where I listened to two people talk to me at once for about a minute before telling both of them I didn’t hear what either of them said.”

There’s little doubt that technology is changing both interpersonal relations and attention spans. Researchers from the University of British Columbia found last year that placing a phone on the table near you during a meeting lowered the perceived quality of the conversation and rates of empathy and trust among participants.

“We don’t have a choice, and these conflicts will play out generationally,” said Leora Trub, professor at Pace University who specializes in clinical psychology and the intersection of psychology and new 21st century technologies. “Even if Airpods are the issue, what happens is that internal conflicts within workplaces are about people worried about replacement, or simply getting older. That plays out as these skirmishes.”

Some agencies are changing up things. At media agency Varick, the management team has agreed as a group to not wear headphones in order to set an example, and show that they are always approachable by employees. At Watson & Company, founder William Richmond-Watson said that playing ambient music with curated playlists means rampant headphones use has become less of a scourge.

At Huge Detroit, managing director Renae Heuer said the agency has worked hard to create a culture that can be respectful of others’ states of mind. Headphones mean they’re busy or trying to hammer something out. In that case, Slack them. Things just get slightly more confusing with Airpods over normal headphones.

“Airpods do present an entirely different issue,” she said. “There’s no visual signal that you’re occupied” since they’re smaller, easily camouflaged by hair, or in many cases, worn literally all the time. “So much for being respectful.”