‘The code is still there’: Why O2’s Fortnite gig is just the start of a brand extension 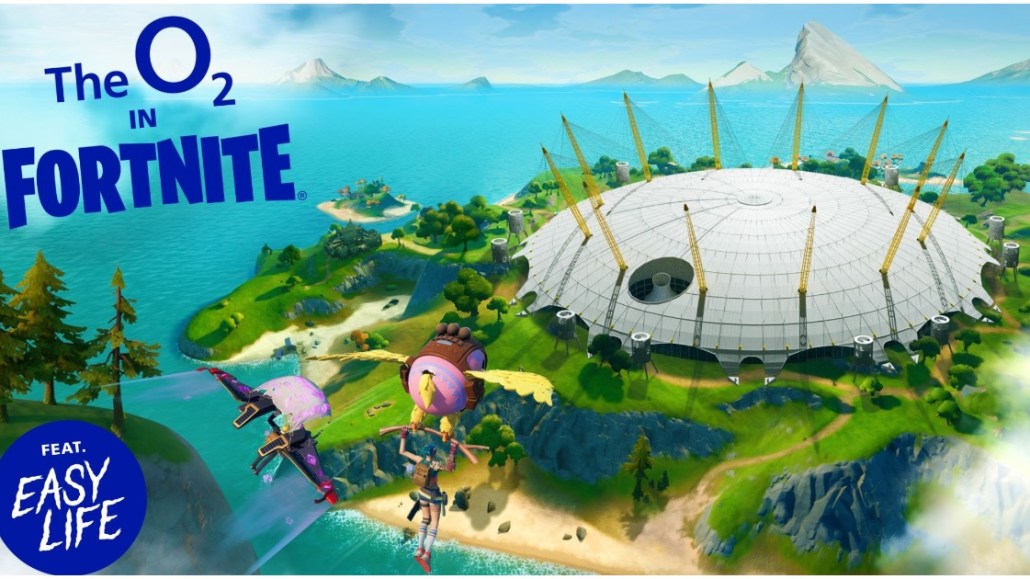 Travis Scott’s concert in Fortnite may have happened over a year ago, but it’s never been far from the mind of the music industry.

In fact, it’s a source of inspiration for the marketers of the O2 Arena. They saw the concert as a litmus test for a theory: if artists can use a platform like Fortnite to bring their worlds to life then that would grow the pie for all involved. Now, those marketers are testing this out for themselves.

They put the O2 Arena inside the Fortnite game.

For a few days last week, fans got to explore the London-based venue ahead of a virtual gig by the Island Records-signed pop band easy life.

Before the event, fans could take part in mini-games, go on rides and hang out with friends in breakout areas across the venue. Once the event started, they got to take part in what amounted to a 20-minute interactive gig where they could visit six areas inspired by a different track from the group’s debut album “Life’s a beach.” Players who completed the entire experience unlocked an exclusive track for the game.

Then the venue shut.

When it came to a one-off experience like this timing was key, said Simon Valcarcel, head of brand and consumer marcomms at O2. So the decision was made to launch it on June 24 and end it on June 27. Many of the best brand tie-ins with Fortnite are limited edition, creating an urgency among players to engage. The limited nature of these integrations also gives marketers like O2 a chance to experiment with different types of integrations, getting a better sense of what success looks like and the partners that drive the deepest adoption and traction within games.

“As music to many has become a virtual on demand experience, it’s natural to see live events migrate to this format as well,” said Greg Castronuovo, chief operating officer at global marketing services network Two Nil Holdings. “Why would we limit our experiences and how we enjoy life to a carbon based world when we can extend those experiences and that joy to a digital platform where we can manifest into whatever avatar suits us? A platform like Fortnite that has a very relevant audience at scale is a savvy way for the music industry to find innovative new opportunities to extend their products (concerts) to fans.”

Even though the focus was the concert, it was important that it didn’t try to replicate a live stream of the band, said Valcarcel. The experience could be richer and more layered because O2 built it within Fortnite, he added. “It built a world within the real world where play and fantasy come to life for the people who step through those gates, said Valcarcel. It’s this suspension of normal reality for the time spent in those places that make them so memorable. The online game worlds are similar,” said Valcarcel.

The marketing potential of activations like this cannot be underestimated. It’s harder than ever for today’s artists to reach Beyonce levels of stardom now that music has a shorter shelf life in the streaming era. Most albums come and go like stories in a news cycle. Fortnite et al are a great opportunity for brand exposure, given how music and gaming audiences converge. The virtual arena may have shut down after the gig, but unlikely for good — especially given the involvement of O2’s ad agency VCCP.

“We’ve built the venue now — the O2 Arena is in Fortnite,” said Valcarcel. “Yes, we’re switching it off but the code is still there — it’s just not publicly facing. And so the ambition will be that we switch it back on again for new experiences.” For now, any follow-up activations will all be about marketing — marketing both the O2 brand as well as artists. But in the future, all bets are off. After all, Fortnite is a platform in gaming not only getting it right for users but also monetizing effectively. Working off of a micropayments model and not an ad model, user interactions there are fluid and only need to pay to enhance their experience, closely simulating real-world scenarios.

“Look at the stats from the Travis Scott concert and the money made from the merchandise around it,” said Valcarcel. “It just shows you the future potential when the activation is authentic to the gaming experience.”

Virtual concerts aren’t new. In fact, it was first popularized by Second Life — a virtual environment not too dissimilar to Roblox that drew attention from the music industry almost two decades ago.

To put those figures into context, ITV’s broadcast of the finale for the top TV show “The Masked Dancer” earlier this month drew an average audience of just under four million viewers, with a peak of closer to five million.