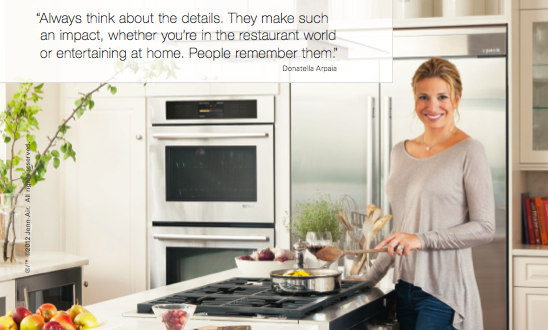 In its latest campaign, appliance maker Jenn-Air is using its print ads to drive users online to watch videos featuring celebrity chef Donatella Arpaia. The print ads will run in the October issue of Bon Appetit. Digitas served as agency for the effort.

The strategy, according to Brian Maynard, director of marketing at Jenn-Air, is simple: Jenn-Air wants to sell stoves and lots of them. And print alone just won’t do. Putting print and digital together results in wider reach and makes the campaign more memorable when it appears in different spaces.

“While print ads are pretty static, the advantage is that they are a physical piece of paper and typically have a longer life than online ads,” Maynard said. “The whole idea here is to take our high-end target audience from that static environment and make them interact more. Our goal, ultimately, is to shorten the distance to the cash register.”

Digitas partnered with Bon Appetit to develop co-branded print and video content featuring Arpaia. She recently remodeled the kitchen of her Connecticut summer home with Jenn-Air appliances, and is the newest maven in Jenn-Air’s new “Master Class” series, which features video content and insights from noted designers and chefs.

The campaign elements include a three-page advertorial and a single page custom brand ad in Bon Appetit. The advertorial features a QR Code leading readers to the Donatella microsite to watch her share ideas for simple appetizers. The videos show Arpaia sharing cooking, design and entertainment tips, while highlighting favorite features within her Jenn-Air appliance suite.

“It’s unique in the sense that is adds this lifestyle element to our traditional ads,” Maynard said. “Often times a print ad talks at you. The goal of the advertorial is to have more of a dialogue and talk with consumers instead of talking at them. That’s where we are headed in all of our marketing.”