H&M-Balmain collaboration is heating up on social

Tonight, in the old JPMorgan Chase building on Wall Street, the H&M x Balmain collection will premiere on a fashion-week-worthy runway with top models Kendall Jenner and Gigi Hadid leading the charge.

On social media, the collaboration’s hashtag, #HMBalmaination, has been driving conversation for the retailer and the Parisian fashion house since creative director Olivier Rousteing announced it at the Billboard Music Awards in May. The runway show is just the next piece in a steady series of buzz-building events, dotted by past actions including Jenner announcing her involvement in September, and a released look book online last week.

Hype has been brewing well before the collection’s set arrival date of November 5, and according to Brandwatch data, the months-long marketing spree has paid off in the form of 312 million impressions in total. Since May, the #HMBalmaination has seen 93,000 Twitter mentions; about half of those (44,000) have been sent since September.

H&M’s one-off collaborations with luxury designers have differentiated it from the pack of fellow fast-fashion retailers like Forever 21, Zara and Uniqlo. The first was in 2004, when Karl Lagerfeld agreed to create a line exclusively for the retailer, one marked by mass availability and accessible price points. Balmain marks H&M’s 20th designer collaboration since, with past partners including Roberto Cavalli, Versace and Alexander Wang, in addition to Lagerfeld.

H&M also surpasses its competition on social, with a new Benchmarking study by social media management platform Sprinklr ranking the company the most engaging and most talked about — out of a list that includes Forever 21, Topshop and Zara — and with the largest audience, across Instagram, Facebook and Twitter. With 36.9 million followers total on those platforms, H&M counted 8.2 million engagements (likes, comments and shares) in September, according to Sprinklr data.

“Success on social media depends on the campaign, the platform, the industry — there’s a multitude of variables,” said Jenny Ryan, senior product marketing manager at Sprinklr. “Brands that have higher engagement tend to have higher overall brand awareness.”

An H&M rep said that the retailer doesn’t comment on its social media strategy; of the campaign with Balmain, H&M creative advisor Ann-Sofie Johansson said in an interview with Business of Fashion that it’s a “brand-building strategy.” Balmain’s collection for H&M won’t be of the same quality as its designer goods — which can cost tens of thousands of dollars — and if past collaborations are any indication, it’s guaranteed to sell out within hours in a chaotic frenzy of in-store jostling and online refreshing. But the fact that creative director Rousteing, a social media star himself and friend of the Kardashians, would design for H&M gives the brand clout that Forever 21 can’t match on its own.

In a case study performed following H&M’s most recent designer collaboration, fall 2014’s with Alexander Wang, the social media analytics company Crimson Hexagon looked at how the partnership influenced customer’s intent to purchase and overall brand sentiment. The case study found that the campaign conversation totaled over 171,000 social media posts during the months of April through December 2014 (from when the collection was announced to the end of the year, two months after release). At the beginning of November, right before its premiere, about 60 percent of H&M’s social media conversation was related to the collaboration. 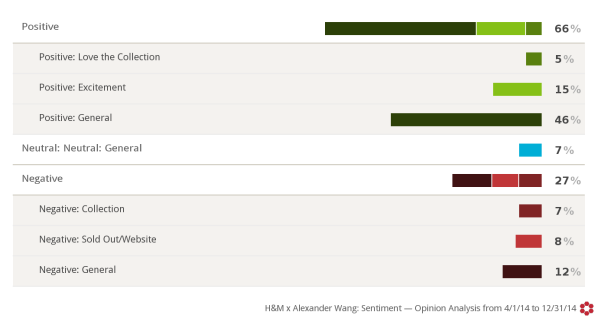 Balmain’s designs for H&M — including jumpsuits for men, bejeweled body-hugging dresses for women and embellished, intricately detailed blazers for all — could be more polarizing for the mass public than Alexander Wang’s urban-inspired athletic wear. On price, some items surpass $500; on social media, though, customers are already clamoring for a piece of the designer.

To see the collection in full during the runway show, tune into Periscope.