Copyranter: The best (and worst) things ever said about advertising

People have loved to express their hatred of advertising since the first invasive ad was painted on the wall of some early caveman’s steakhouse. Equally, the Mad Men and Women who have excelled at making ads have loved to bombastically declare their love of the world’s second-oldest profession.

With that in mind, here is a sampling of what’s been said about advertising through the years, for better or worse. Sorry, you will find zero Don Draper-isms here, because Don Draper wasn’t a real person and he was a crappy copywriter.

This is not one of the good quotes (has old Jerry never had a clandestine quickie?), but it is from one of the good guys. Many of you may not know about the career of Mad Man and Brooklynite Della Femina because he is a bit overshadowed by George Lois — but he was/is crazy. In an “ideation” session with Japanese company Panasonic that wasn’t going well, he presented this headline: “From Those Wonderful Folks Who Gave You Pearl Harbor.”

His agency, not surprisingly, didn’t win the account. In 1969, Della Femina published a book on the ad biz with that headline as the title. It’s the funniest book about advertising I’ve ever read.

Again, many of you youngsters have never heard of Mad Man (and Brooklynite) Dusenberry. He started as a junior copywriter at BBDO in the early 1960s … and retired as chairman of BBDO in 2002.

He wrote the taglines “The Choice Of A New Generation” for Pepsi, and “It’s Morning Again In America” for Ronald Reagan.

The brilliant seven-time Nobel Prize-nominated British writer was perplexed and annoyed by advertising during his career. That second blurb is doozy. The sonnets quote is paraphrased. Here’s the full quote: “It is far easier to write ten passable effective sonnets, good enough to take in the not too inquiring critic, than one effective advertisement that will take in a few thousand of the uncritical buying public.”

Ha-ha, OUCH! He’s right, of course. Advertising—at least on the business side — has always been at the forefront of Newspeak, as Orwell called it in “1984.” Right now, I’m trying to imagine him walking around SXSW listening to wankers say things like “experiential marketing activation.”

This public evisceration of advertising was placed in the streets of London about four years ago by, not Banksy, but British street artist Robert Montgomery — who calls his illegal billboard hijacking work “concrete poetry.” See more of it here.

NOTE: That Banksy quote about advertising you all see and share all over the Web was not written by Banksy.

George Lois is called “the original Mad Man.” This is the truest short definition of the creative process I’ve ever read. Take note, branded content hacks.

Incidentally, Lois had no love for “Mad Men,” which he called “a show about a bunch of scum bags.” 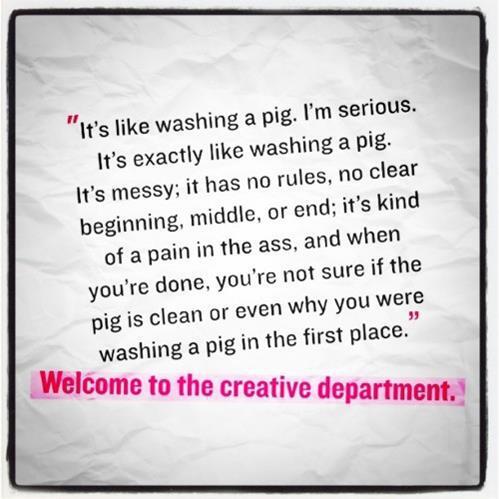 Lastly, Luke Sullivan, a more modern Mad Man and a great copywriter who helped build the Martin Agency into the creative leader (GEICO, etc.) it is today takes a noble stab at explaining the mysterious magic that zaps back and forth between copywriters and art directors — magic that is woefully missing from virtually all digital and native work today.

If you’ve got other good/bad quotes, add them in the comments.