Now on the menu at Chipotle: literature

It almost sounds like a joke: “Toni Morrison, Judd Apatow and Malcolm Gladwell walk into a burrito joint …” But Chipotle couldn’t be more serious.

Starting today, Chipotle stores across the nation will receive shipments of new packaging — specifically bags and cups — on which are imprinted the essays of 10 well known writers. 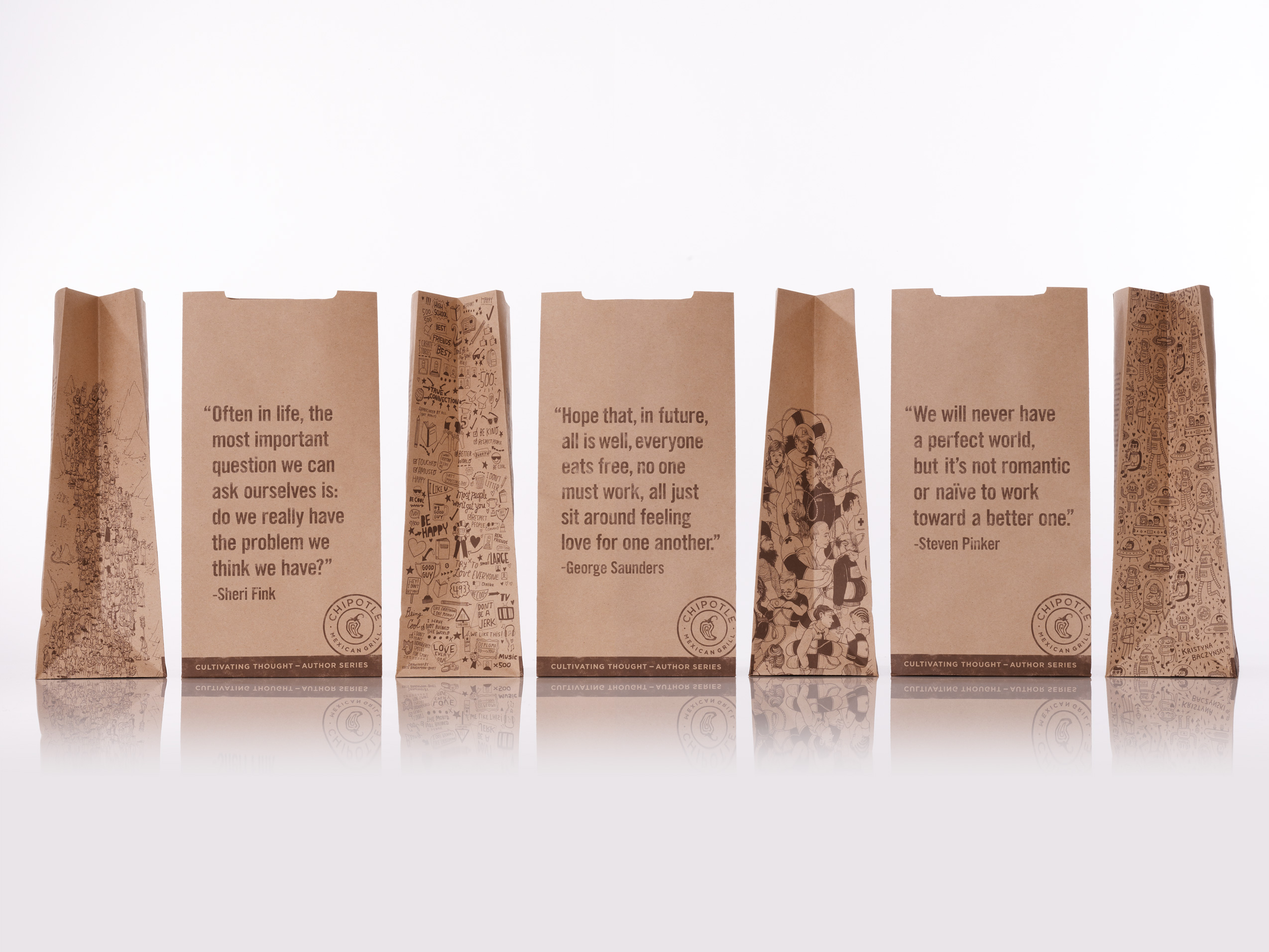 The idea, called the “Cultivating Thought” author series, came from outside the company courtesy of novelist Jonathan Safran Foer (“Extremely Loud and Incredibly Close,” “Everything is Illuminated”), who told Vanity Fair that one day he was eating Chipotle and, apparently not yet owning a smart phone, got really bored.

Necessity being the mother of invention, Foer emailed Chipotle CEO Steve Ells, whom he’d previously met, and suggested a novel idea: print essays from well-known writers on the company’s unused cup and bag space. Ells liked the idea and today it has come to life. Or the novel has died; we aren’t sure which yet.

It’s not the first time Chipotle has used their packaging for something, according to communications director Chris Arnold.

“We’ve often used our bags and cups to talk about things related to Chipotle. Farm stories, people we admire, and information about our ingredients, for example. But never anything like this,” Arnold told Digiday in an email.

“These essays are unique in that they don’t have anything to do with us, and we gave the authors complete latitude to write about whatever they wanted to.”

The copy is split among 6 cups and 4 bags and include whimsical designs.

“We live in a world in which there is shrinking space for literature and writing and less time than ever for quiet reflection,” said Foer in a press release provided by Chipotle. “The idea of expanding the space and time, of creating a small pocket of thoughtfulness right in the middle of the busy day, was inspiring to me – particularly given the size and diversity of the audience, which is America itself.”

Chipotle is no stranger to creating content. In February it launched a curious branded Hulu series titled “Farmed and Dangerous,” an original comedy. This more-literary move is somewhat reminiscent of New York City Transit Authority’s “Poetry in Motion” project, which features often surprising snippets of poetry plastered along subway cars and station walls. Only with more hot sauce.

“Most [fast food restaurants] use packaging as promotional space, or in cooperation with vendors, who offset the cost of producing the packaging,” said Arnold. “We’ve never done that. Instead, we’ve used that space to share our own thoughts or humor to entertain people or educate them about elements of our business. Here we’ve gone in a very different direction and simply wanted to give them something entertaining and thoughtful to read. It’s sort of analog pause in a digital world.”

The company says it’s too soon to say how long the idea will be extended, though Arnold noted “It’s something we’d like to see continue for some time, and think there’s a lot of potential.” Foer’s endorsement aside, though, it will no doubt give some literary elitists a sizable dose of indigestion.