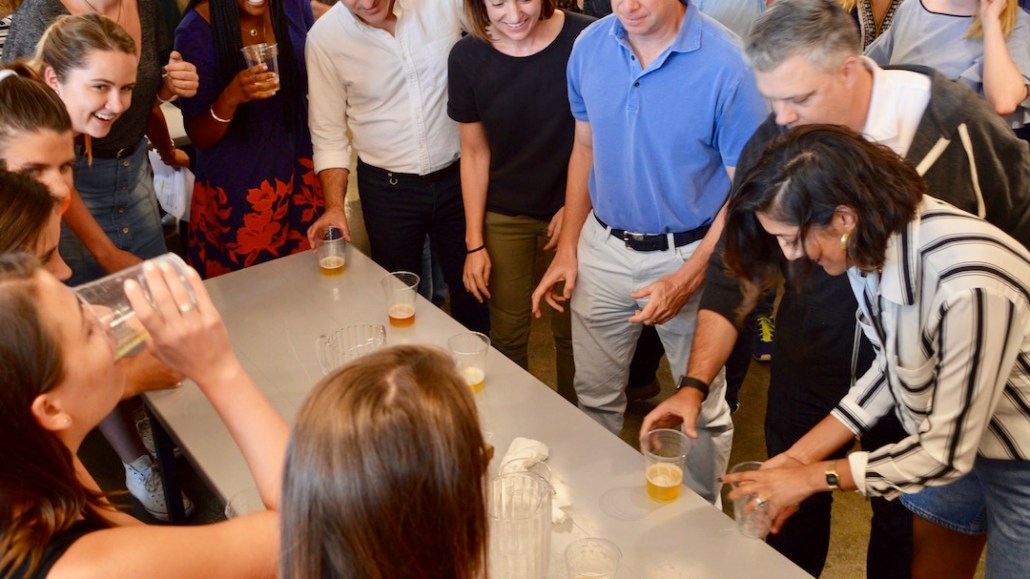 Agency life can be stressful. Ad executives face pressure to come up with fresh, original ideas and finish client projects by their deadlines. Here’s how shops including Arnold Worldwide, Huge and BBDO are helping their employees wind down and relax this summer.

This month, around 250 executives at Arnold Worldwide’s Boston office attended the agency’s summer party on Thompson Island in Boston Harbor. Arnold employees spent around five hours playing flip cup, lawn games, volleyball and soccer, tinkering with a drone, and of course, drinking. Others hiked or took in the Boston skyline from Adirondack chairs.

“We appreciate our employees,” said Sasha Hartman, president and chief client officer for Arnold Worldwide in Boston. “It’s important for us to demonstrate to everybody that Arnold is the best place to work, so why not give them some evidence to point to?”

In late July, around 90 Huge employees spent an afternoon on the Clipper City, taking in the New York City skyline along the Hudson River. Employees sipped specialty drinks while taking in views of the Statue of Liberty, Ellis Island and Governors Island. Some Huge executives even helped the boat crew raise the sails of the schooner.

Last Friday, the agency headed over to under the Manhattan Bridge in Brooklyn’s DUMBO neighborhood for happy hour, with drinks from The Lighthouse.

BBDO in New York brought together its 400 employees at Roosevelt Island’s Four Freedoms Park before July 4. Lindsey Cash, vp for BBDO who helped plan the party, said the agency took a Coachella-like approach to organizing this year’s summer outing, where attendees drank, danced and played games like cornhole, Jenga and flip cup. BBDO also hired two DJs and invited artist duo The Bumbys, who promised to give attendees “a fair and honest appraisal of their personality” based on their appearance.

Kirsten Flanik, president of BBDO in New York, said the team gets together every year to review the state of the business and hand out agency awards and recognition, but this year’s summer party was the agency’s first company outdoor outing in many years. “This year, we decided to take that thank you one step further and to say thank you with a party outdoors,” said Flanik.

Last week, Marcus Thomas hosted a baseball-themed party in its headquarters in Cleveland to celebrate its 80th birthday as an independent agency. The agency gave out baseball shirts and served Cracker Jacks, corn dog bites and specialty drinks to its 200 employees. Attendees could also take pictures of themselves as old-time baseball players.

Jonathan Schwartz, CEO for boutique marketing agency Bullseye Strategy in Florida, took his 12-person team on a catamaran ocean cruise in Fort Lauderdale last month. The team enjoyed food, snacks and wine on board, then dined at a waterfront restaurant called Coconuts.

“We wanted to take the team on the water where we could enjoy the beauty of our surroundings and the feeling of freedom that only being out at sea can provide,” said Schwartz.

Virtual drinks, Brown&Co
Agency Brown&Co doesn’t have a physical office space, so its six founding members and contractors work remotely across South Africa and the U.K., among other countries. Working remotely can lead to a lack of culture, so the team decided last month to host a virtual drink party through a video conferencing program called Zoom. Around 10 people attended the virtual party and toasted to the summer.

“We work hard to define what a virtual agency culture means,” said Kaylee Dobie, project management collaborator for Brown&Co. “I loved our virtual summer party because it counters the idea that virtual agencies cannot have a company culture.”

Header image courtesy of agency 360i in New York