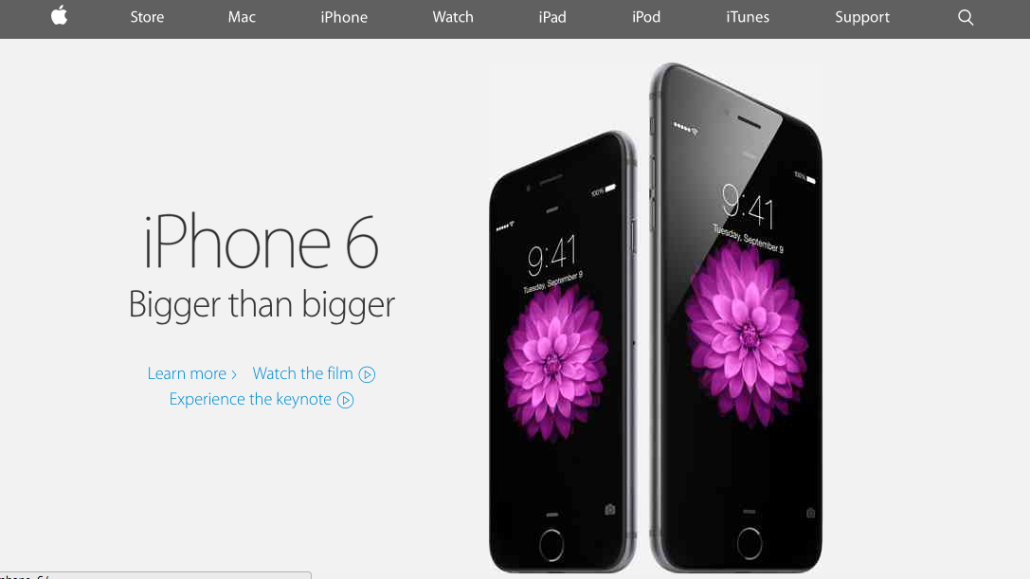 Jeff Rosenblum is a founding partner of Questus, a digital agency.

With the unveiling of the new iPhone6, iPhone6 Plus and Watch, Apple demonstrated that it’s still the category killer in all things technology and all things cool. Sure, tech lovers and design mavens swooned over the details of the newest iToys. But the most fascinating part of the experience was Apple’s updated website and the small but significantly fundamental changes they made in advance of the event.

With their site relaunch, they created a template for successful website design. Here are five critical lessons:

Site design is a process, not an event
The Apple site has historically been an industry leader. But let’s be honest, it’s felt pretty stale lately. They haven’t broken the mold in a few years, except for changing the hero shot on a video. Websites are organic beasts. They need to be fed every day. You can’t simply overhaul them every few years. They take longer to create than we would like; if you consider web development a one-time event rather than a process, it’s easy to get caught behind. But virtually all companies want to be seen as innovative, and websites are the centerpiece for many brands’ marketing efforts. Apple’s new site is a cool upgrade, but it comes a little late and feels a bit “me too.” And that only reinforces the sense that they can no longer innovate. But they’ve fixed a lot of issues with their new site, and Apple is still one of the few companies that can sustain a setback in brand perceptions.

Think adaptive, not just responsive
It’s truly a mobile-first world, as mobile now exceeds desktop usage. For years, Apple hasn’t had a mobile-optimized site which was frustrating for users and undoubtedly had an impact on both revenue and brand perceptions. They finally launched a responsive design site to coincide with this latest launch event. This was indeed a huge improvement, but responsive design is only a small step forward. The next step is to make their site adaptive, which means that the experience changes not only based on the size of the screen, but also on the user scenario, so that different content is delivered at different times. There are numerous technologies, including micro-location, which enable unique content to be delivered based on exactly what the user needs before he even clicks. Apple has to go further to catch up to technologies that put mobile and the user experience first and foremost.

Integrate or die
For years, Apple has been non-participatory in social media. That was a rather aloof, but provocative position. Not anymore. Apple completely overhauled its standard approach to site design and is now leveraging a long vertical scroll to include Tweets, photos and videos. Tim Cook finally seems human, thanks to his folksy Tweets.

I’m backstage and this is my first tweet from my iPhone 6. It’s amazing. You’re going to love it.

The audience now feels connected, thanks to the video stream. The story is inclusive, thanks to photos in the Hands-On Gallery. All of these efforts are effective, but not entirely unique. But what makes them so powerful is that Apple integrates all of its efforts and uses its enterprise web site as the central hub to provide synergistic benefits.

First capture the heart, then capture the mind
The new Apple homepage includes an incredible video shot in an empty loft. It’s strategic, it’s beautiful, it’s unique and it’s compelling. Before I could even find a rational reason to buy a new Apple product, they gave me the emotional reasons to do so. That’s how influence works. You need to emotionally prime people before hitting them with the features and benefits. Apple has always been a master of this, but they realize now that a beautiful hero shot is insufficient. Video is the de facto standard but rather than a lame talking head that provides zero emotion and zero connection with the audience, Apple has made it clear that they remain geniuses at marrying creativity with technology.

Friction kills
Apple’s live stream for the launch event didn’t perform consistently. I was at a major business conference where all attendees were ready and waiting to watch the stream, and the viewing was to be followed by passionate discussions about the new product line. But it was a complete bust. Industry leaders, teachers, coaches, consultants, bloggers and an immeasurable amount of other influencers were completely cut off. It was a major lost opportunity. We all know that building an army of evangelists is the key to branding success. Recommendations from friends are often 65 percent times more influential than paid ads. But when you invest millions in new products and paid media campaigns, simple pieces of friction, like poor usability or tech stability can wreak havoc on ROI, and halt the valuable flow of positive word of mouth.

Great brands are no longer built simply on interruptive advertising. And it’s not enough to just have a good website. The consumer journey is multifaceted and consists of dozens of touch points, the majority of which are digital. A brand’s website is the most important touch point, particularly for brands that sell complex products. Consumers need an integrated experience that shifts them from a prospect to a customer and then a customer to a prospect, one that includes both rational and emotional reasons to believe. Apple is now, as ever, in the ballpark for delivering it all. They continue to provide an actionable model for brands looking to break through.