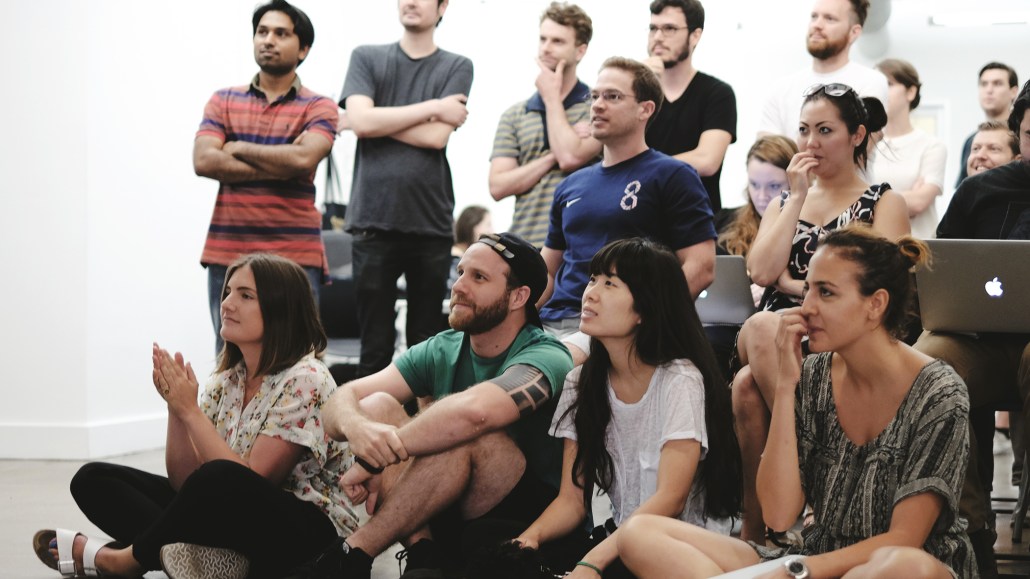 Soccer fever has gripped the U.S. this World Cup — and why not, with the national team outperforming expectations. Yesterday was the deciding game for the U.S. squad, a match against fearsome Germany for the right to proceed to the knockout round of the tournament. As it happened, the U.S. lost 1-0 yet still advanced thanks to Portugal, which knocked off Ghana.

Like many workplaces, agencies took a break from the rigor of client work to set up viewing stations for employees. Here’s the view from three New York agencies. 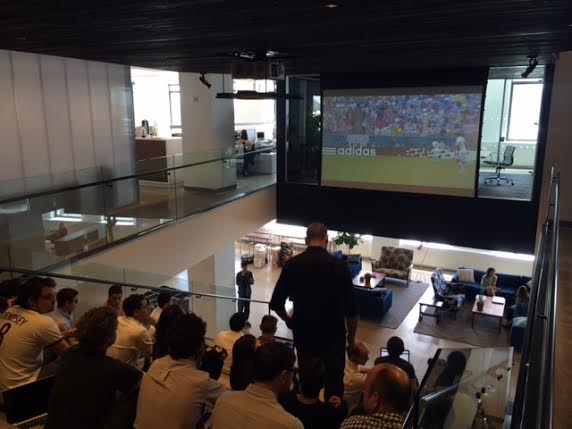 Advertising agency Droga5’s new office space may still be under works, but that hasn’t deterred it from making the World Cup a focus. A huge projector screen has been rolled down in front of the auditorium staircase, the spot where all the agency’s meetings are traditionally held, to show matches daily.

“Droga5 also has its own version of the March Madness bracket pool,” Emily Hodkins, Droga5’s director of communications, told Digiday. “Today, I have already seen three-plus individuals in American Flag spandex,” she said.

At digital agency Huge, all company meetings were cancelled and CEO Aaron Shapiro scheduled two “company meetings” coinciding with the match duration so the staff could enjoy the match with beer and pizza. Arrangements were made to screen even the other big match of the day, Portugal vs. Ghana, Michelle Pulman, the communications director told Digiday.

Huge has also been involved in developing a responsive site that measures social buzz around World Cup games. This site tracks each country’s hashtags as it plays in real time, tallying hashtag mentions and illustrating the “winning” team in social.

The result will be a “colorful display of data” highlighting the social progress of each team, which Huge intends to launch on Saturday for the knockout round. It has also created a special World Cup “flag” logo on its website’s homepage that links to its client Eurosport.com, which displays World Cup game times.

“It’s been hard to focus,” Razorfish’s Managing Director, Christopher McNally told Digiday, saying that the company definitely had a “soccer undercurrent,” thanks to its substantial number of international employees.

It isn’t uncommon for the staff to watch games collectively, crowded around the monitors in the office “town hall space.” Moreover, Razorfish sponsors its own soccer team in the NYC Soccer Collective.

“It’s great for office morale — it keeps people motivated, inspired and excited,” said McNally. Pulman agreed that it has been a great experience. “Even for the later games, Huge-ers are opting to stay in the office to watch with colleagues rather than head out to a sports bar. People are really excited to watch together.”