As another week winds down, it’s time to pause and reflect on the outrage that was.

With the Vitriol-o-Meter, Digiday takes a weekly look back on the things that (justifiably or not) sent the Internet into a tizzy. Grumpy Cat’s reported net worth, for example, was worthy of an aneurism. Sometimes, however, there is surprisingly not enough outrage for the things that deserve it. We would have appreciated more social media foot-stomping over the Korean Air exec who, literally, went a little nuts.

Read on to see how the Internet reacted to some of the week’s more viral stories — and whether we think there was too much (or not enough!) indignation in the zeitgeist.

1. Food fight
Ben Edelman, a Harvard Business School professor best known for trolling ad fraudsters, decided to flex his legal muscles over a $4 dispute with a Boston-area Chinese restaurant. The email back-and-forth — never do embarrassing things in email, people — was sent to Boston.com and quickly went viral, largely for his demand to be compensated triple what he felt he was cheated out of. By the end of the week, Edelman was left abjectly apologizing, but not after another over-the-top email complaint, allegedly attributed to Edelmen, surfaced over redemption of a Groupon with a sushi restaurant. Edelman denied having written it.

2. “The most hated man on the Internet”
Chuck C. Johnson went from relatively obscure, hyper-conservative blogger/troll to mainstream media subject this week after he claimed to reveal the identity of “Jackie,” the woman who claimed to have been gang raped by a group of University of Virginia fraternity members in the now-infamous Rolling Stone article. Gawker wrote an explainer about him, sister site Jezebel called him “twisted” and The Washington Post profiled him, as did Politico, whose scathing piece pointed out Johnson’s history of inaccurate, hate-filled reporting.

3. Grumpy Cat
The Internet’s collective head exploded this week when it was reported that Grumpy Cat (née Tardar Sauce) has made her owner nearly $100 million. Tabatha Bundesen, the former waitress who quit her job to manage her cat’s career (oh my god, this sentence), refutes the claim. Still. Grumpy Cat more than 29 million views on her YouTube channel and 7 million likes on Facebook. And is, we remind you, a cat.

4. Torture report
The so-called “torture report” released by the Senate this week contained only a fraction of the findings on how the CIA attempted to gather intelligence from detainees through “enhanced” interrogation. Still, it certainly contained enough to stoke widespread justified outrage online, including the freezing death of an alleged Afghan militant, the horrifying euphamism “rectal rehydration, the use of insects, sleep deprivation, prolonged standing, threats to family and more. We can only hope that when Dick Cheney shows up to be interviewed on Meet the Press this Sunday he is offered a nice plate of hummus.

5. Traumatized law students
Pity the law students. Not only is a legal degree not worth as much as it once was, but they’re under so much stress that they can’t take their final exams. Columbia University offered for students “traumatized” by the Eric Garner and Michael Brown grand jury decisions to delay their final exams. Law students at Harvard and Georgetown requested similar treatment. Needless to say, considering grads who go on to work at top firms can expect fat salaries, not many were impressed.

6. Uber vs. the world
Poor Uber has had a rough week. The car service startup was banned from operating in New Delhi following the alleged rape by a driver of a female passenger. A judge in Madrid has ordered a temporary halt to the service, effectively banning it from Spain. Thai authorities have also banned Uber, saying the company lacks proper registration and insurance. District attorneys in San Francisco and Los Angeles claim Uber made “untrue or misleading representations” regarding the quality of its own background checks on drivers. If you need us, we’ll be walking home.

7. Hollywood emails
The hack on Sony, presumably carried out by hackers angered over an upcoming film lampooning the North Korean dictator, is deplorable. That stipulated, the leaked emails showing how Hollywood lives down to its petty stereotype has been a rich source of schadenfreude. Also noteworthy: Hollywood types struggle with the iPhone’s “ducking” auto-correct. Celebs, they’re just like us.

8. Best Buy tweet
Best Buy somehow got into hot water over a tweet that tried to glom onto the hit podcast “Serial.” Sure, the tweet referred lightheartedly to a true-life murder, but this was a misdemeanor brand social fail, not a felony.

Nonetheless, a scaredy cat Best Buy deleted the above tweet and hurried out an apology after receiving a tongue lashing from Twitter scolds. 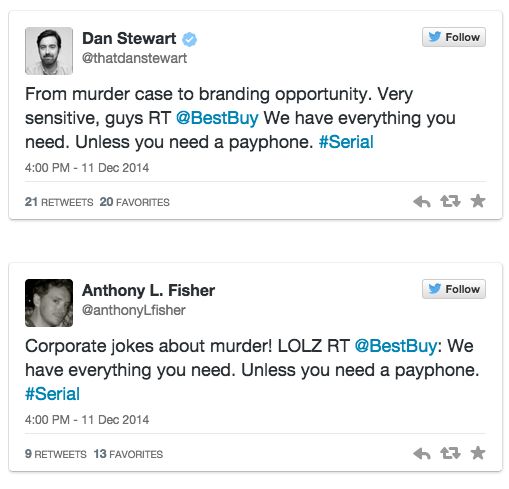 9. The Sony hack-back
Speaking of Sony, the company is rightly embarrassed by the leak of executive emails. But its response — executing a denial of service attack on sites where the material is hosted — is hardly helping matters. Sure, emails calling Kevin Hart (pictured) a “greedy whore” and musing over whether President Obama liked “Django Unchained” are far from helpful, but there’s no putting this back in the bottle. Oddly the denial of service attack is one angle of the story that received little online indignation.

10. Korean nut case
Korea was scandalized by the entitled, awful behavior of a Korea Air Lines executive, who ordered a Korea Air plane back to the gate to kick an attendant off for the crime of serving nuts improperly. The exec, a daughter of the Korea Airlines chairman, has been roundly vilified on Korean Twitter, held up as an example of egomaniac business elite: She’s resigned. America shrugged.