Pokémon Go gets consumers back to the mall, but will they shop?

Pokémon Go mania has taken over, leaving no public (or, for that matter, private) space untouched — including malls and retail stores.

The influx of aspiring Pokémon Masters may actually be a blessing in disguise for the malls of America, which have experienced slumping sales and foot traffic in recent years. According to social media, many Pokémon Gyms and PokéStops — locations for players to train their Pokémon or stock up on free game accessories like Pokéballs — are in malls and popular stores like Forever 21 and H&M.

While most stores are embracing the invasion of gamers into their stores in hopes of driving non Pokémon-related purchases, others are not as keen to have non-paying customers bombarding their space. But for department stores like Nordstrom and Macy’s, which have continued to report decreasing earnings and increasing inventories in recent quarters, simply getting consumers through the door is a great start.

In addition to consumers sharing in-store Pokémon run-ins on social media, many store managers said they’ve noticed employees playing on breaks or even on the job. An employee at an H&M in Manhattan said she spotted five Pokémon hiding in the break room, while a manager at a Forever 21 store in California said most of her employees have been on the app on their lunch breaks. 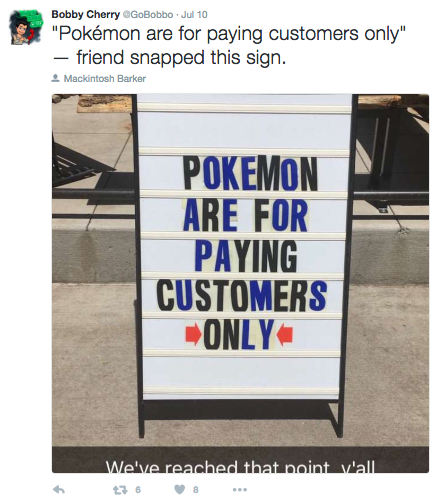 Darlee, a beauty counter manager at Bloomingdale’s in Manhattan who declined to share her last name, said a number of her employees have been on the game during slow periods.

“One of my employees wanted to leave for her lunch for 20 minutes and actually walk around and play the game,” she said. “There’s been a lot of people from every [beauty] counter trying to get me involved to play the game and get the app.”

Pokémon Go, currently available as a free iOS and Android app, employs augmented reality to allow users to catch Pokémon characters out in the real world by using GPS technology and their phone cameras. The app exploded in popularity over the weekend and currently has more than six million mentions on Twitter.

Mall employees and gamers alike have taken to social media to share updates on the swaths of young people wandering around mall walkways and shops hoping to catch ’em all.

Virgnia Sarita, an employee at the Converse store in New York’s Soho neighborhood, noted concern about the ongoing reports of players walking into oncoming traffic due to lack of attentiveness while playing.

“I do feel that people should be careful when they’re crossing the street,” Sarita said. “It’s a cool game, but I wouldn’t want someone to get hurt because of that.”

However, retailers hoping to take advantage of the phenomenon won’t have much luck unless they are already an established part of the game. Niantic Labs and The Pokémon Company predetermined the stops before launching the game, with the help of Google Maps and an algorithm, Forbes reported. While most of the stops don’t require users actually enter them, it hasn’t stopped the most zealous players from scouring the real world shops.