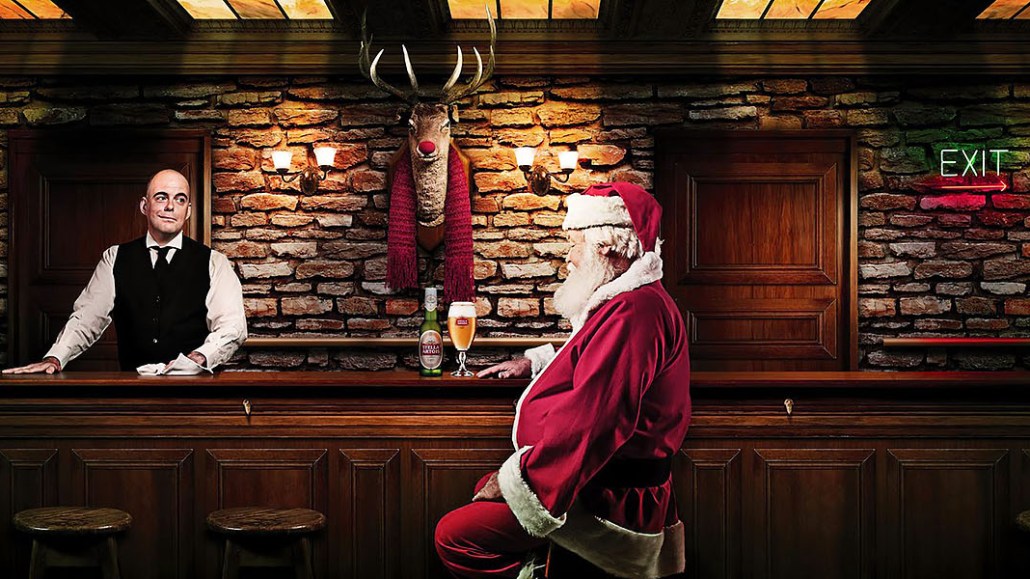 Jesus Christ, it gets worse every year.

Where the hell have all the heady Xmas ads gone? That’s what I want for Christmas 2017, Santa: ONE intelligent holiday ad. In the meantime, please join me in enjoying some smart spots from Christmases past.

This wonderful piece of blasphemy via the French pay TV channel was immaculately conceived and presented by BETC Paris and Glue Society director Gary Freedman. The newborn hungry savior of humanity can wait — Joseph, Mary and guests have car chases to watch. The tapping of the figurative watch by that wise man is just precious.

Back in the first week of December 2015, after a month of noisy, cheesy holiday sappiness, Kit Kat in the U.K. started running this anti-ad TV spot that began: “Welcome to nothing.” What follows is 30 seconds of nothing but white screen and crisp copy that speaks to people like they’re cognizant creatures, not brain-dead elves. It was yet another perfect execution in the long-running “Have A Break” Kit Kat campaign by JWT London.

This is how you do an animated holiday ad. You have to watch it about 10 times to get all the British humour jammed into this 75-second spot for a new Xmas-flavored “Pot Noeldle.” Look for the less-than-appetizing product shots. They are quite literally making wicked fun of their less than wealthy demographic, whom I’m sure loved the ad (by AKQA, London). “POO NOODLE” –LOL.

Back before Aldi jumped on the overwrought John Lewis bandwagon, the discount retailer ran holiday ads that stuck to their winning “Like Brands. Only Cheaper” campaign. After watching, you might be wondering if the model is referencing a certain British soccer legend known for unsubtle underwear ads and a somewhat squeaky voice. (Ad agency: McCann Manchester)

You can be cheery and drippy and heartwarming and still be smart, goddamn it! See? All Ogilvy Buenos Aires needed was one simple linchpin and good execution, and they got themselves a great holiday ad.

Harvey Nichols has done many smart Christmas ads in the past (examples here and here). They haven’t released a 2017 ad yet, and probably won’t at this “late” date. But a copywriter can dream.