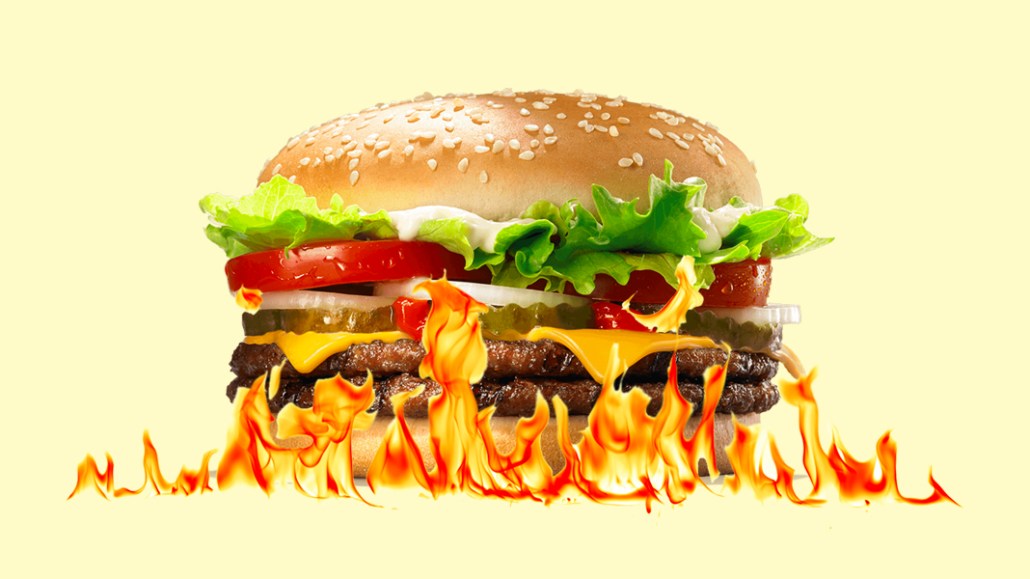 In 2009, Crispin Porter + Bogusky and Burger King were on a high. In answer to a brief to show people demonstrating their love for the Whopper on the burger’s 50th anniversary, two zany campaigns had pushed the envelope and broken online records: Whopper Freakout (which secretly taped people after telling them the Whopper was off the menu) and Whopper Virgins (which took a crew worldwide to find people who had never eaten Whoppers).

CP+B then managed to follow up that creative with a campaign that broke almost every rule in the marketing playbook: the Whopper Sacrifice, a Facebook app that asked users to unfriend people to get a Whopper. Within a week, more than 82,000 people had sacrificed some 233,900 friends this way, and the campaign received some 35 million impressions. Here, the story of that award-winning campaign, from the people who lived through it.

The brief
Russ Klein, then-CMO, Burger King: The premise for Freakout and Sacrifice and Virgins all traces back to the customer insight we developed from a deprivation study we’d done. We’d asked Whopper fans to keep a photo diary of everything they ate for 30 days. The rule was, they couldn’t eat a Whopper.

Brian Gies, then-vp, U.S. marketing, Burger King: We had just completed this annual deprivation research study that confirmed the Whopper was No. 1 in the category. People were attached. But we also wanted [to make] news about it and declare the superiority. Here’s where the brief came in. We wanted to cultivate Whopper love.

Aileen Echenique, account manager, CP+B: Brian had just traveled around world for Whopper Virgins with a broiler strapped on.

Rob Reilly, then-partner, CP+B: With Burger King, we felt we had the relationship to bring ideas that were risky and thought-provoking, and pushed technology and innovation.

Winston Binch, then-partner at CP+B: A bunch of work came out. Sacrifice was an extra-credit idea.
Echenique: Sacrifice was this nugget of an idea inside the massive campaign.The idea
Reilly: Jeff [Benjamin, then-partner, CP+B] had [the Sacrifice] idea before the assignment came up. We’d talked about it a lot and about selling this idea.Benjamin: I kept noticing that I was accepting everyone as a friend. If we had even one common friend, you were my friend. I had thousands of friends. At the same time, I [didn’t know] what to do with them. So, I didn’t really have friends.

Gies: There was a lot of attention on Facebook, and some people looking at how many friends you had on the platform as a status symbol.Reilly: There was this tension in the culture, [and it] was kind of bullshit.

Benjamin: It was maybe going to be our holiday card from Crispin, where you sacrifice friends for good creative luck. We had this feeling of being hated in the industry, so [we thought], why don’t we just lean into this hate?

Gies: What I loved was, it had nothing to do with the product. It was this kind of paradox of what friendship was becoming, as defined by this platform. There was this difference between a virtual friend and the friend sitting near you. We talked about it more as the Crispin ideation machine continued to ideate. And as we peeled it back a bit, we got this idea where there was no real way to bid a friend farewell on Facebook. So basically, “sacrifice” a friend, get a Whopper.

Gies: We weren’t going after families – it was a market using Facebook. This was not when Facebook was playing with brands the way it is now. And Burger King had a thing already where you could get free Whoppers, and we [already] had the coupons.

Benjamin: We had 25,000 coupons for free Whoppers.

Binch: We started looking into the possibilities of even doing this. We looked through Facebook guidelines, and there was nothing about prohibiting this, not in our interpretation. [But] we knew it would upset them.

Benjamin: There was a moment where there was a meeting going on with Facebook about something else. Winston was there and told them we’re thinking about this.

Binch: We met this Facebook exec. We told him what we wanted to do, and he told us not to do it. We did it anyway. The company at Facebook was divided — half the people hated it. It went against their [idea of] community.

Reilly: So Jeff had this thing in his back pocket when we put all the pieces together – Whopper Freakout, Virgins and Sacrifice. Russ Klein bought them all.

Ivette Alonso, manager, digital media, Burger King: So we were in a conference room at the Burger King headquarters. We loved the idea. Our lawyers were on standby, though.

Benjamin: The client’s people told me later that they, like, killed that thing eight times. The account people kept pushing it though. Someone told me it was this person in our Miami office.

Echenique: I remember presenting it to the client, saying, “If you produce nothing else, this is the concept you have to produce.”

Reilly: We went back and wrote the copy for the app 100 times. “Sacrifice your friends and get a free Whopper.”

Benjamin: In testing it, I deleted Neil Heymann’s wife as a friend and she got so mad. That’s what was great.

Echenique: We worked through Thanksgiving, broke off for some turkey, got back to work. Jeff was animating it and doing flame animations.

Reilly: Winston and his team built it. Having that kind of control was so critical to not having this get screwed up. We didn’t have to partner with a digital agency.

Echenique: It was up for 10 days. It was crazy. It went viral. We [used] over 23,000 coupons. It got 35 million in media impressions. That number is burned in my brain because it’s still in every single one of our new business pitches.

Facebook turns it off
Benjamin: After it launched, I was in LA for CES, and we were grabbing breakfast with a dude from Facebook. It was the morning when it was getting big. Facebook had reached out to shut it down. It was really awkward. We weren’t talking about it, but it was definitely in the air. I know now they weren’t happy, but there were people who found it pretty funny even at Facebook.

Klein: I remember Brian Gies walking into my office and saying, “Facebook wants us to pull this thing.” I wasn’t angry. I sort of remember being curious.

Alonso: Someone came [over] to my desk panicking, telling me [Facebook] was gonna shut us down. We got on like a ton of conference calls with attorneys.

Benjamin: It was a cat-and-mouse game. They kept trying to call us. We’d not respond, buy time. They asked for some changes. We made them. Then they wanted more. But the changes would make it not be “Sacrifice” anymore.

Binch: It was only up for a week. And then Facebook started hobbling it, taking out parts of the functionality. The big thing that went was the notifications that told you your friend had unfriended. We were gonna run out of coupons anyway, so we said, pivot.

Reilly: We were out of [the coupons] anyway. But we played it up, like, “We were shut down by the Man.”

Benjamin: We’re not in the business of giving out free Whoppers. We were hours away from where we would have shut it down anyway. Then, we get a cease and desist. That was great!

Alonso: I can’t even remember what we put up. But we put up this thing, and it went even more viral.

Reilly: It was “Whopper Sacrifice had been Sacrificed.”

Benjamin: If Facebook would have waited, that wouldn’t have been the headline. It got even bigger.

Binch: Oxford University Press made “unfriend” the word of the year. And Chris Anderson put in his book “Free” that it ended up being a way to figure out the valuation of Facebook. A friend was the price of a Whopper.

After Sacrifice
Echenique: I went back to school three years ago to get my MBA at University of Miami. This case study was in our textbooks.

Reilly: Man, those were some great years.